Player of the Year: Luke Harangody (ND). Who else? He's unbelievable on offense, credible on defense, and gets a touch on every one of his team's possessions. Crazy hustle. Good rebounder. Tough and angry as they come.

Coach of the Year: Rick Pitino. Because if it ain't coaching, I don't know what explains why they're so good.

Defensive Player of the Year: Hasheem Thabeet (CONN) - a game changer at center.

Freshman of the Year: DeJuan Blair (PITT) - not Dominique Jones? Or Jonny Flynn? I think Blair had to shoulder a lot for Pitt, and did so admirably, handling the dirty work of blocks, steals, and rebounds (especially offensive).

F Joe Alexander (WVA) - I freely admit I'm a fan of his game. As they called it in St. John's season finale, he's about the one dribble and dunk. With a decent jump shot, and good court sense. Fandom probably elevates him to the first team over Sam Young, who is as good.
C Roy Hibbert (GT) - A Much more polished offensive option than the other big center. Needs to rebound at a higher rate, but still a game changer.
G AJ Price (CONN) - Excellent passing the ball, Price (aka LAPTOP #2) directed a team of non-ballhandlers to a 24-7 record.
G Jonathan Wallace (GT) - Just steady, though unspectacular. Toss up here with McAlarney.
C Hasheem Thabeet (CONN) - Doesn't get great offensive position, but completely changes the game on both ends. Hit his foul shots this year.

F Sam Young (PITT) - Spectacular year out of seemingly nowhere. Was a candidate for most improved player in my book. Better outside shot and field goal percentage than Alexander, but not a passer.
F Jeff Adrien (CONN) - Solid finisher, the recipient of a fast-break offense started by Thabeet and run by Price.
C David Padgett (LOU) - Much better with him in the lineup. Played only half a season, but he's been the linchpin for the (possibly) best team in the conference.
G Deonta Vaughn (CIN) - Sophomore carried his team for most of the season until Big John Williamson took over. Deadly when hot.
G Kyle McAlarney (ND) - Deadly all the time. Will pass the ball but is mostly a shooter.

G Draelon Burns (DEP) - Like Deonta Vaughn, he carried his team, but has some quiet days and cold streaks.
C Arinze Onuaku (SYR) - Nasty good on defense.
G Jerel McNeal (MARQ) - Known for his thievery, is also a good assist man. Needs to improve on 25.6% from the 3-point line.
F Kentrell Gransberry (USF) - Gets to the line and a bull in the post. Made USF a tough out every night with little talent around him.
F Geoff McDermott (PROV) - Turns down shots too much, but a great passing and defensive forward. 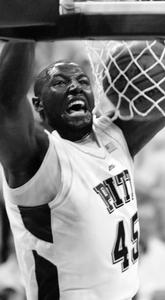 F DeJuan Blair (PITT) - see above.
F Mac Koshwal (DEP) - Really good rebounder. Shows some flashes of being a real difference maker.
G Jonny Flynn (SYR) - Good scorer and passer needs to improve behind the arc and/ or get to the FT line.
G Austin Freeman (GT) - He's ridiculously effective inside the arc.
G Dominique Jones (USF) - Played a lot, scored a lot, and scored well. The fact that he and Gransberry are on this list speaks to how bad the talent around them is.

F Donte' Green (SYR) - Spectacular moments, but often out of control. Jacked up too many threes when he has the ability to put any defender on a poster.
F Justin Burrell (STJ) - Raw and over-emotional at times, but his good days are fierce. Shines in a secondary/ reactionary role, with another player facilitating.
F Gilbert Brown (PITT) - This was a toss up with DePaul's Dar Tucker. I think Brown's going to break out next year.
G Jeremy Hazell (SH) - Good scorer will likely step up next year with F Brian Laing's graduation.
G Corey Fisher (NOVA) - Hey, picking freshmen is tough. Probably could have done with fewer minutes, and could work on his game going to the hoop.