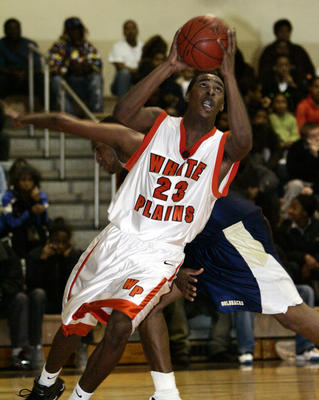 Jumped the gun with the announcement a little it seems (quote and photo from LoHud.com's Varsity Insider blog):

Then I called Kilpatrick.

He sent me a text back denying that he had committed and that it was all just a rumor. Perhaps he doesn’t want everyone to know just yet. Perhaps it really isn’t true.

Adam Zagoria (aka the Zagsblog author) posted a response tonight from White Plains coach Spencer Mayfield, who said "It’s pretty close, but not yet."

I tend to believe the rumor and expect Kilpatrick to end up at St. John’s (after a year at prep school). But, to say the least, the Kilpatrick recruitment has been a windy road.

I see smoke, I think there's fire; Sean Kilpatrick has been talking up St. John's basketball for a minute now. And it would be great to see this scorer in the red and white uniform next year, no doubt. (But he's gonna have to change his number, Paris Horne has #23.)

But is he waiting for his test scores to improve to see if he can make it to next year's class? Or is he waiting to blow up on the prep level?