Late-season spring signees are like one night stands at the end of a bar night - it's the desperate teams that are looking at the recruit, flaws and all, and convincing themselves that the player will put them over the top.

Well, the Red Storm couldn't score - so to speak - and so they've picked up a couple of recruits in the spring signing season, and are supposedly in the process of signing Phillip Wait (though no official announcement has been made).

Norm Roberts' staff is still in the hunt for Sean Kilpatrick and now, for the blow-up player of the spring AAU season, Donald Williams. I don't like the speculative stuff, but this sounds serious and it's a slow news day so... 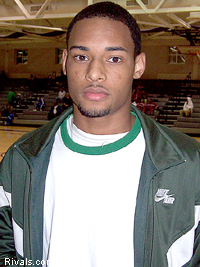 Williams is originally from Baton Rouge, LA, but attended Progressive Christian Academy in Maryland to qualify. He's listed as 6'4, 6'5, and 6'6, with one report having him at 6'7"; his listed weight is between 185-210.

As you can tell, he's a bit of an unknown. And the tried and true method of googling has a snag: not only does he have a common name, but he also has the name of a North Carolina standout basketball player and 1993 Final Four MOP.

But after Williams' productive spring (more on that later), he got offers from St. John's and Marquette:

"With St. John’s I like the atmosphere of New York City, and it would be cool to play in Madison Square Garden.

"And Marquette has a great winning tradition and has produced some great players like Dwayne Wade and Steve Novak."

Adam Zagoria is tracking Donald Williams' recruitment, which breaks down like this:

Donald Williams' coach thinks that St. John's is a better fit because there is more playing time available; coach also compares him to Ray Allen and Wally Szczerbiak(!!). But he's also athletic. And he's qualified to play next season.

Donald Williams is on campus today and digs it. He might visit UAB or Marshall, and will visit Marquette in a pair of weeks, after which, he'll make a decision. We learn that Williams didn't qualify to play in the NCAA out of Southern Lab HS in Baton Rouge, and did prep school at Progressive Christian in Maryland.

Apparently, he knows Anthony Mason Jr. and Justin Burrell and thinks they are "cool dudes."

As for how he blew up, he tore it up at a couple of late spring tournaments, starting in April and most recently, in the well-watched Bob Gibbons tournament. And there he became known:

Six-foot-6 Donald Williams, the 17-Under Select MVP, was one of the major surprise players this past weekend, leading his New Orleans Jazz team to the 17-Under Select championship. Williams finished in the top 10 in scoring and was No. 1 in made field goals with 55 in six games. He uses his extraordinary athleticism to slash to the rim and finish in traffic. Williams will need to improve his perimeter stroke to reach his full potential at the next level. However, he is a definite high-major college prospect with a bright future.

- Rivals.com, writing about the same event:

New Orleans Jazz wing Donald Williams was named Most Outstanding Player of the Select Division of the 17 and under division. The 6-foot-5 prep school guard averaged a hair under 23 points a game.

"He was the best player we played against all weekend," said one AAU coach that tried to slow down Williams in North Carolina. "He's really good. People need to know about him."

Consider it done. Williams technically is part of the class of 2008, too. Let the phone calls begin to Progressive Christian in Maryland.