As per gonzalo on the Johnny Jungle message boards, former Johnnie Omar Cook has signed to play in Spain for Unicaja Malaga, where former Raptor Jorge Garbajosa has also signed.

Donald Williams is no longer involved with St. John's or Marquette. Now, I'd heard that Norm Roberts' staff pulled the scholarship offer; his AAU coach says the following:

"He didn’t sign with St. John’s," Tate said. "They really wanted him. Marquette never followed through on the visit. University of Houston and Marshall are still interested in him."

If they really wanted him, and Marquette didn't follow through, the Red Storm would have signed him. Either way, it looks like the recruiting class is closed and the St. John's staff has two scholarships to play with for a scoring guard or wing and a big man, and Malik Stith coming in in 2009. 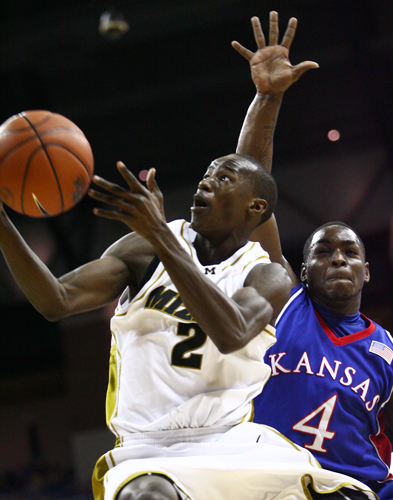 "The reason why he’s leaving Missouri is he kind of wants to come home, family things and stuff," said Lawrence’s skills trainer Mike Rodgers. "We’re going to concentrate on the Big East as far as his recruitment. We are concentrating on Villanova, Seton Hall, Rutgers and St. John’s, and moving along to looking into Providence, Pittsburgh and Marquette. We have a timetable on how we’re going to do it. I’ve had conversations with a number of Big East coaches."

It seems that Keon was unhappy with his role, losing his starting job, and wanted to transfer last December. And more on Lawrence from the Kansas City Star.

This observer is not in love with Lawrence's game. I watched many Missouri games after wincing at the Red Storm conference beatings, just to see some better basketball.

But Missouri's hectic style is even more out of control than U Mass' or Syracuse's; I don't think it's a great system to evaluate a talent in. I thought Keon Lawrence didn't pass half enough, and in my eyes, he didn't stand out like Jason Horton or Stefhon Hannah (before the nightclub incident).

Bringing in a transfer also leaves the Red Storm with one scholarship in 2009's strong NYC class. Moreover, Lawrence would graduate with the bulk of the team in 2011, leaving the team with 5 players when they leave. I might take a statistical look at his game, and I think he'll come out as redundant with Paris Horne. So unless Horne redshirts his junior year (which might be a good idea anyway), this seems like an idea that has more cost than benefit.