Share All sharing options for: Cue Thuggy Bear Jokes Up 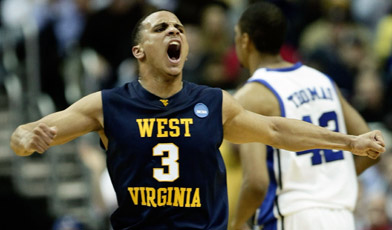 Son, don't argue with the police.

Wait, who goes to Pirates games, anyway? Is Morgantown, WV that boring? From Wire reports:

Two West Virginia University basketball players were charged with scuffling with police and underage drinking after a fight at a Pittsburgh Pirates game.

Joe Mazzulla and Cameron Thoroughman were arrested Monday at PNC Park, where the Pirates were playing the Colorado Rockies. The two were in custody and awaiting arraignment Tuesday.

"We will let the judicial process take its course and the matter will be handled internally," West Virginia coach Bob Huggins said.

The 20-year-old players began arguing with police when they refused a request for identification, according to a criminal complaint. The officers said the two smelled of alcohol.

Thoroughman said he did not have ID, according to the report. Police said he lied about his age and threatened a security guard. Police said officers brought Thoroughman to the ground when he refused to put his arms behind his back. While Thoroughman was struggling with the officer, Mazzulla tried to grab his teammate and punched a police sergeant.

- wear your golf gear or something that says you can't possibly be 21. Or add some grey to your hair.
- the cops catch you, why fight it? You got tagged. They'll just cite you, and you're not gonna get away.
- and really... you're two very tall * guys. At a ballpark. Low profile, use a low profile.

And remember that the real world won't be as lenient as Coach Bob Huggins. You're more dispensable out there.

*Thanks to Ryan for the catch on that.