Ah, a busy day at work, there is a (dude that's totally fake) Montauk Monster that washed up on the eastern LI shores (pictured @ left). The oldest recorded joke we know of is about flatulence, the next one is about sex.

And below, a completely unnecessary photo of Danneel Harris, one of the stars of Harold and Kumar go to Guantanamo Bay, a movie whose unrated version featured and uncomfortable amount of (unrealistic) female nudity for a man to watch with his lady. I can't believe I'm typing this, but it actually was excessive and took from the humor. Now for some links:

+At first, I thought the Griffey trade to the White Sox (now approved!) sounded awesome. And now that he's approved it, I think... why? The Sox have Swisha-house, Jermaine Dye, the killin'-it Carlos Quentin, and then Thome and Konerko at 1B/ DH... so unless they trade one of those guys or glue Konerko to the bench, I don't get it yet.

+The Yankees have made deals for Xavier Nady (and his name, passed down through the generations), Pudge Rodriguez, and have tossed out LaTroy Hawkins. Keep active, pinstripers!

+Dear Mets: That is NOT a reason to make a stupid trade. Even though John Maine is strained and the Mets are worried about Pelfrey's workload. No dumb trades, guys. no rentals, no Billy Taylors. The team is humming, and Hardball Times points out the the pitching staff is improved by half a run since Rick Peterson's firing, and though his defense has not been as good, Jose Reyes might be the best shortstop in the league at creating runs.

+The now-traded-to-Houston (analysis by the Melo Backpedal here) Ron Artest received this response from Yao Ming, reacting to a reporter's question:

"When I text-messaged with Luis (Scola), we talked about team chemistry. That’s only what worries us. We worry about the new attitude to the team. We are adding talent to the team, and we need that, but building team chemistry is important. This is not bad. I don’t mean he is not welcome to Houston. But a new player always needs some time.

"There’s worry. Obviously, yes. ... Hopefully, he’s not fighting anymore and going after a guy in the stands. ... I have to find a way to talk to him and see what we can do as a basketball team. He has a history, but we know he is a physical player. He is a good player. He really can help us."

"This is Tracy (McGrady) and Yao’s team, you know," Artest said. "I’m not going to take it personal. I understand what Yao said, but I’m still ghetto. That’s not going to change. I’m never going to change my culture. Yao has played with a lot of black players, but I don’t think he’s ever played with a black player that really represents his culture as much as I represent my culture.

"Once Yao Ming gets to know me, he’ll understand what I’m about. But really, he doesn’t have to talk to me, because to me, I’m going (to Houston)."

I'd like to add this part: while not a black player, I am black, and Ron Ron, you have your own culture. Queensbridge doesn't even share your culture, you're on some other stuff. New York loves you, but Ron, you represent Artest. You go back to Queensbridge, but are your pants are saggy, teeth yellow, a la Method Man/ Redman?

More pro and college basketball, and a note about the Jets and Farve after the jump. 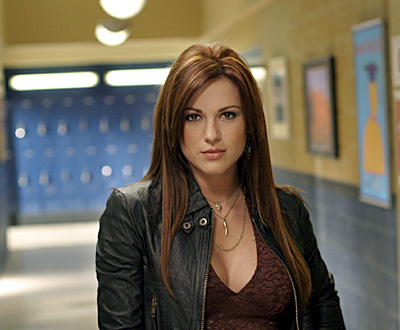 + But first, the unnecessary photo for the express purpose of driving up page views. Also because she's prettier than Renaldo Balkman's game.

+We'll miss Renaldo Balkman (traded from the Knicks to the Denver Nuggets), though he didn't play very much last year. But really, his flaws are so great that it's not certain that he should have been drafted at all. And it seems like he was traded simply to cut costs.

+I love that Sasha Vujacic has no "cut your damn pretty hair" clause. Someone needs to get this kid into movies, he's prettier than the picture to the right with his 80s workout headband.

+An update on the once anointed "Jewish Jordan," Tamir Goodman.

+Do college basketball coaches really need 10 years of time to turn a program around? That kind of thinking got St. John's Norm Roberts and extension tacked on to his five year deal (rollover or not, they had to give a vote of confidence or fire him), but I don't know that it takes so long to turn a team around, scandal and NCAA sanctions or not. I can understand why Indiana University felt the need to up the years on their deal with an established coach like Indiana's Tom Crean, but they know they're going to have to tear up the contract to match other coaches' increases no matter what... Interestingly, the linked USA Today article quotes a sports law professor from some school called Florida Coastal (that sounds like a made up Law and Order college) that a typical contract term is 5-7 years.

+Jets QB Chad Pennington is confident that he gives his team the best chance to win. I hope so, because I don't want to see Coach Mangini try to ride 4-interception-Farve into the playoffs. The offense doesn't really stretch the field... so what's the point of bringing in the ol' gunslinger? Even if he's gotten better at the short yardage stuff.