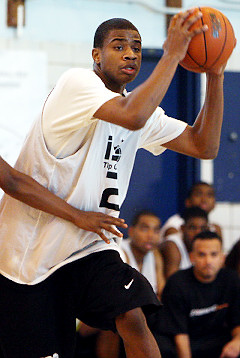 Johnny Jungle has an exclusive interview with blue chip New York forward Kevin Parrom. He'll be playing for South Kent School in Connecticut with his teammate Omari Lawrence this fall, but for now he's been ballin' in the city and at national AAU tournaments, straight blowing up his name.

In the wide-ranging interview, he had this to say about his visit this week to St. John's campus, where he toured the facilities, met with the coach, and saw his friends Justin Burrell and Malik Boothe:

"First off they are hiding that campus. I don't know why they are hiding it because it’s really nice. It’s big. I've been there for practice and stuff but I've never seen the whole campus."

He thought the dorms were really nice. Parrom left most impressed with his meeting with the academic advisor. He was impressed with how thorough and serious they were about academics and keeping their players on the right track.

Good to see the player seriously into the academic side. From the one-on-one, we also learn:

+ Kevin Parrom likens himself to Magic Johnson
+ he's been playing with Omari Lawrence since the 4th grade (and claims that he'd win in a if they played each other in college)
+ Parrom loves his chocolate cookies and video vixen Lauren London
+ and best of all, he unabashedly loves old Michael Jackson jams and the movie the 6th Man starring Kadeem Hardison.

Aside: the movie also features as one of the ballplayers none other than Kentucky's Boy Wonder, and former U Mass/ now Oklahoma State coach, Travis Ford.

Love a player who name checks Michael instead of, say, L'il Wayne (A Milli is going to be the most overplayed jam before college basketball games this year, mark my word). Old blues men/ older cats the barber shop would snap back with, "what you know 'bout that-there?"

Parrom also talks about national competition, how Lance "Born Ready" Stephenson is probably his toughest defensive matchup, what he loves to eat. Check that interview out.

edit: one thing not in the Jungle interview: he says his friends google his name, but Parrom admitted he might have done it once, maybe twice, maybe more than that. I know what that means. Dude has a google reader all set up to catch occurrences of his name. Don't front, Kevin.