The folks at Ballin' Is a Habit wrote a catch-up piece on Omar Cook, now playing in Europe and officially a citizen of the country of Montenegro. The citizenship change means he counts as a European for Euroleague teams, and is not subject to the American quota on those teams.

And he can play for the Montenegran national team.

A look back on Omar Cook's checkered career and quick exit, below the fold. 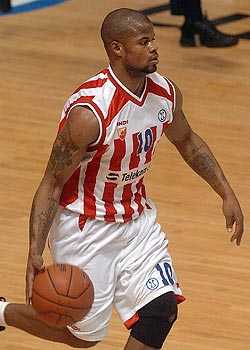 I mean, Cook was nice, but that ego was nuts; and his shooting was flat awful. Make you cringe awful. Throw things at your TV awful.

He shot over 45% in only 6 of 29 contests, and he really liked shooting - his lowest number of field goal attempts was 8. He did set an assist record with 17 against Stony Brook. His assists gave him a strong personal offensive rating (for those into tempo neutral stats, check out his page on StatSheet)... but the team went 14-15.

And Cook left in a bit of a huff, to chase an NBA dream that ended up being a fantasy.

Some guys (see: Dominic James) just aren't NBA material; some guys just don't learn how and when to shoot, and some guys are just not good at it.

There are lessons in Cook's story, and in the stories of St. John's recent point guards. One is that sometimes NYC hype is just hype. The idea that a NY point guard's toughness and intensity alone will get them to the NBA is just not true.

A guard has to be able to shoot. Very few basketball systems function with a point guard who is a liability from most spots on the floor.

Second is that a ball hogging guard who can't shoot just drives everyone mad. Cook was a real outlier when it came to assists, and assists are sexy... but do not entirely make a point guard. Cook's defense was iffy as I remember it. And Omar had 5.1 turnovers per game. That was a turnover rate of 27.7 percent, and an assist to turnover ratio of 1.7.

For the group of lead guards that St. John's has had for the past 10 years, that's good for third behind Erick Barkley's two years in the red and white, where his A/T ratios were 2.3 and 1.9 in 1999 and 2000, respectively. But the ratio is not the be all end all - turning the ball over 5 times a game is ridiculous, and may indicate that a player needs to slow his roll and stop flinging the ball all over the court for the spectacular play.

This has sparked a couple of questions in me about the comparative quality of St. John's point guards... look out for that on this site in the next day or so.