More on Lute Olsen's quitting of the Arizona Wildcats

Share All sharing options for: More on Lute Olsen's quitting of the Arizona Wildcats

Lute Olsen has stepped away from the Arizona Wildcats program he grew into a national power.

Gary Parrish has a piece on how perhaps Lute Olsen should have resigned, that he was losing a step or had lost control. And that if he had stepped down, at least earlier in the year, the school could have found a new, high profile coach (more on that below).

The AZCentral/ Tuscon Citizen has a timeline of Lute's crazy last year, filled with drama, weird moments, and rancor.

It's sad to see a college basketball icon go out like that. And really, it's sad to see anyone struggle with the decision and then choose to leave at an inopportune time. As long as he doesn't claim to be rejuvenated in a few months and asking for his job back. 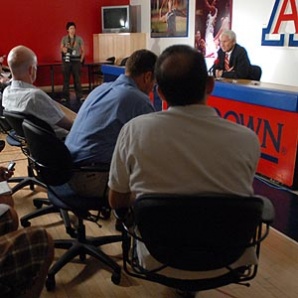 But I always hate that coaches of any age love to tell kids not to be quitters... but then they quit, like Bob Knight. And they quit when their team needs him.

Look, a man or woman has to know if they can fulfill their obligations. Not so far as "I didn't blink", but at least to the point where if they accept the job, they plan on trying their damnedest to make it work for the duration of the important period of their jobs.

Coaches like Bill Parcells and Bob Knight just piss me off. It's obnoxious to simply decide, a few days into practice, that he doesn't want to coach anymore. If it is health related, say so.

To me, sports is supposed to teach responsibility. The man could have called his retirement at the end of the year and done his goodbye tour, letting some of his assistants do some game coaching, taking a game off for "health reasons" or "chasing Arizona skirt" reasons.

The future of Arizona basketball will likely be bright. Though some top recruits have moved on (Negedu to Indiana, for example), there is some talent. And The Wildcats have a strong brand name in college hoops. Parrish mentions a couple of very likely candidates to be candidates - Gonzaga's Mark Few and Pittsburgh's Jamie Dixon. Dixon is a California guy, and has coached at Northern Arizona. He did turn down an offer to become coach at Cal - was it because he loves Pittsburgh so much or because Cal is a weaker job in the Pac 10? The Associate Head Coach, Tom Herrion, has been a head coach before.

Whoever gets a look at Arizona will start the annual coaching shuffle, where coaches are booted from their hot seats and hot coaches are elevated.

Will the mercurial Bob Knight make his return in Arizona (I doubt it)?

But food for thought. Any coaching names that sing out to you?