Ambiance: Tighten Up Tighter, Billy Ball and the Upsetters' version (video, pop up in another window)

Now that St. John's has matched the combined win total of the two area NBA teams, the Knicks and the Nets, they hope to get a second win against the Atlantic 10 St. Bonaventure Bonnies in Rochester on Tuesday evening. It's technically a neutral site contest, but being two hours away from the Bonnie's Olean, NY campus in western New York doesn't sound particularly neutral. 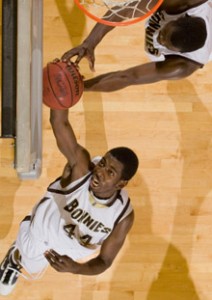 This game will be an early road test against an improving squad from the A-10, featuring the league’s Rookie of the Year Andrew Nicholson, who has gotten publicity in both Sports Illustrated and Slam! Magazine. St. Bonaventure has talent and size in the paint, and capable guards; this will be a better test of the Red Storm than LIU, and a good chance for the team to see what the team can do against more comparable talent.

St. Bonaventure’s basketball team has been around since 1916, producing a few NBA players. No Bonnie player is more important than Bob Lanier, NBA Hall of Famer and the namesake of the Bonnies home basketball court. The program has fallen on hard times since current Rhode Island coach Jim Baron left. Jan van Breda Kolff and the president of the school knowingly admitted a JUCO player who had not achieved his Associate’s Degree to the program.

Playing with an ineligible player meant the program had to forfeit victories; the president and coach were booted, a number of other players left, and the Bonnies were left with a shell of a program like St. John’s was earlier this decade. The folks in western New York want to see their storied program be competitive again; a win over St. John’s would definitely excite their fanbase.

This observer has gripes about St. John's play - the preponderance of three-pointers in particular - but if they had driven it inside, and Kennedy and Horne had been the main scorers, one could have said that the game meant little. They showed something out there with the ability to hit from distance. But they will need a more controlled game to play the boys from Olean.

(note: the first set of statistics are from the game against Cleveland State on 11/13/09, the second from last year's averages.)

In their opener, St. Bonaventure enjoyed a hot first half, with star sophomore and A-10 Rookie of the Year Andrew Nicholson scoring 14 of his 17 points in the first half, with help from Jonathan Hall, and surprise contributions from Michael Davenport, who has worked on his game this summer. The Bonnies used a three-quarter court trap to frustrate the Cleveland State Vikings, dunked at will, and enjoyed numerous trips to the free throw line. The young Vikings guards lost their composure under the pressure, according to coach Gary Waters.

For more on the Bonaventure win, you can also see the Bona Blog's recap of the game.

(note: the first set of statistics are from the game against Long Island U. on 11/13/09, the second from last year's averages.)

The Red Storm was paced by DJ Kennedy, who has found his inner outside shooter. The biggest hole in his game was probably the unreliable jump shot, but just because he can hit from distance doesn't mean that DJ should ignore all the things he does well off the bounce. Of the starters, Justin Burrell's time was limited with foul trouble, but his aggressiveness was on display on both ends; Burrell was more of the forward the fans thought he would be. But overall, the response was mixed; St. John’s struggled a little in putting LIU to bed.

Horne and Evans had forgettable openers. Boothe made plays with assists, but he will likely have to score at some point this season. And in general, a team that has never shot the three ball well shouldn’t be settling for outside jumpers just to show off; they should work the ball around, attack the defense’s weak points, and control the pace of the game. The long jump shots are nice, but the ball needs to get down low.

At the end of the bench, Dele Coker, Omari Lawrence, and Quincy Roberts had great games, making plays when they got in and showing that this team might actually be very deep. Hardy’s shot was off, and it seemed that he might be a little uncomfortable at the point, but he made plays; and Brownlee made plays as well.

Make Them Run. You want to play fast? This is a good game to test out the limits of playing fast. Nicholson can be a difference maker, but big men are generally not eager to get into an up and down game, especially not one who takes high percentage shots in the post. The Red Storm should look to run and test the Bonaventure athletes on defense. And in this testing, the Storm needs draw fouls on offense and force turnovers on defense.

Stay Excited... But In Control. The game on Friday against LIU showed the newfound excitement the players have for their style of play. But it is important to stay in control – taking smart shots, controlling the pace on defense, and not turning the ball over. In the second half, especially, the Johnnies seemed to lose their concentration, letting the Blackbirds back into the game. The team has to look to assert control from beginning to end.

More Effective Minutes. Friday’s opener was a feature for newcomers Dwight Hardy and Justin Brownlee, and for DJ Kennedy. Meanwhile, Sean Evans had a real game to forget, taking a few jump shots and only pulling down 4 boards in 21 minutes. And in truth, most of the starters could have played better on offense and defense. Burrell’s minutes were limited by foul trouble, and he needs to play more. Horne’s shot was a little off (including an airball). Malik Boothe didn’t make a field goal. This team needs more impact minutes from the starters.

Defend the Post Intelligently. Against a post player who will get his touches in Andrew Nicholson, the Red Storm need to defend intelligently. This means keeping him out of his favored positions, not picking up silly touch fouls, and not leaving the paint exposed for backdoor dunk/ layup attempts from his teammates. Expect to see Evans use his strength on Nicholson, and hopefully Coker will log some minutes without fouling. His shot blocking was an asset to the interior defense.

Rebounds. Offensive rebounding was a key to maintaining control of the Long Island University game, and the team will need to control the glass in Rochester. On defense, Justin Burrell was a glass cleaner. But against the smaller Blackbirds, one would have liked to see the Red Storm keep them off the glass more (especially the guards).