Share All sharing options for: Game 3: St. John's vs Brown

Ah Brown, that fine elite university founded before US Independence, where the students have no core requirements. The school with the long history of tolerance, and originator of the famous Ivy League naked parties (don't get all that excited); the school that had as undergrads Ted Turner, Chris Berman, Lisa Loeb, Gov. Bobby Jindal, John Kasinski, and Laura Linney, that most goofy of Ivy League institutions...

They're not very good at sports. The match against the Brown Bears is the on-campus opener for the Philly Hoop Group Classic, which is not a round robin tourney but a selected set of non-conference matchups for the participants. St. John's avoids Virginia Tech and instead plays this game against Brown, and a game each against Siena and Temple the next week during Thanksgiving. 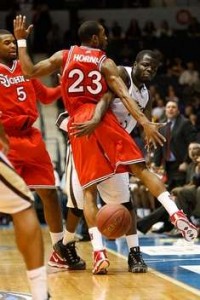 The first two games have been a departure from what has seemed to ail the Red Storm in the past - offense (for more on those games, take a look at Bart's Breakdown for each game and the St. Bonaventure box score). The team has been solidly efficient on offense against both LIU and St. Bonaventure, strafing the nets from distance.

But the Red Storm ballhandling has been a little bit worse than the opponents' ballhandling. That's not a good trend when going into the ballhawking meat of the non-conference schedule, with schools like Siena and Duke eager to snatch that possession.

The last minute dramatics on the road are a nice change. But the defense - and to a lesser extent, turnovers - put the team in this position. To be effective in the Big East, this team has to force opponents to their plans B and C. St. John's didn't do that last night; star forward Andrew Nicholson played like star forward Andrew Nicholson and not like Jack Nicholson. If there was video of the game, it would be part of his NBA prospect highlight reel.

There seems to be a lack of concentration away from the ball; the Bonnies took advantage of defenders for back cuts and drives into the lane. There is a such thing as playing one's man too close, especially if it's a team with one offensive option in the middle and no reliable perimeter shooters.

The Red Storm will use this game against Brown to further help the staff figure out the rotations, who can help the team, and work out the kinks in the offense and defense.

In two games, the Bears have been paced by all-Ivy Leaguer (and Millstone, NJ native) Matt Mullery, who took the school record for blocked shots in their opening game win against St. Francis in Brooklyn. They have also been a slightly better second half team, increasing their scoring from distance in the opener and defending better (and shooting better) in the loss against Virginia Tech in Blacksburg. As some coaches like to say, they battled.

Mullery blocked a pair of shots against the Hokies, and posted 13 points on 5-10 shooting, so we know he can play against a competent frontline. Freshman Andrew McCarthy was another double-digit scorer, putting up 14 points on 7-11 shooting, all inside the arc. Matt Sullivan, younger brother of fellow starter Peter, shot 3-7 from distance.

The Red Storm played all 11 available scholarship players against St. Bonaventure, displaying the team's depth. But the team also displayed an uncertainty about how they are going to play this year, how the players at the thinnest positions - forward and point guard - are going to play hard without fouling out, and an inability to make the lane a dangerous place for opponents. The pulled out a gritty victory, even when mistakes made it seem that the game was lost; and they shot very well from the perimeter.

Individually, a few players settled in. Malik Stith's debut was decent; Malik Boothe drove to the hoop like we know he can to win the game. Paris Horne was solid, and DJ was a rock, except for the turnovers. Dwight Hardy was decent; Quincy Roberts made some plays, as did Justin Brownlee. Omari Lawrence's basketball IQ was on point, and he will be pushing for playing time on this team. Sean Evans hit some jumpers, but Justin Burrell didn't get the ball, prompting the Rochester announcer to state the Red Storm don't have a true post presence. This is what happens when your effective post player doesn't get the ball.

While Andrew Nicholson is an excellent player, and Jaytornah Wisseh is also very good, I am personally beginning to be worried about the defense. Not the effort, but the scheme. Solid screening and cutting in the post seems to be difficult to defend for the Red Storm, and the rest of their opponents will take notice. The Johnnies need to stomp out the Bears this Friday and remember how their defense is supposed to work.

The Feel-Good Game of the Year. It's about time that St. John's plays a game where the starters can rest in the second half. I would like to see this Red Storm team make some devastating runs, 10 points or more unanswered. It's not a necessity; but this team needs to have periods where they stifle Brown and use the turnovers to draw fouls, throw down dunks, and cut out their proverbial hearts.

Rebound Better. Brown, so far, has been a poor rebounding team But St. John's hasn't been good about cleaning the defensive glass; and the long jump shots create long rebounds, picked up by opposing guards, that start fast breaks. St. John's needs to put in a dominant effort, getting second chance points on one end and minimizing Brown's second chance points.

Make Some 2's. And draw some fouls. This is also a note to get the ball inside on drives and on passes to Justin Burrell, whose post moves semed nice against LIU. A post presence will cause defenses to cheat inside, leaving more perimeter shots open against good opponents. And playing inside allows for more offensive rebounds - something St. John's was very good at last year - and controls the pace of the game. Part of the reason teams have stayed close is their advantage in number of trips to the free throw line; St. John's has to remember how to shoot freebies, as well.

Better Ball Control. The team is actually turning over the ball more than their opponents - St. John's has turned the ball over 21.1% of the time compared to 18.8% for opponents. If the team isn't going to close all lanes into the post, if they're going to try and play pressure defense and/ or play fast, they HAVE to have a positive turnover ratio. The team needs to work out their defense this week; and more importantly, they have to figure out what traps they're falling into that make them turn the ball over so much. It's not like they're driving and drawing fouls, and they have three ballhandlers including Hardy. The Red Storm shouldn't be giving up the ball if they're taking so many threes.

Backups Need to Maintain The Pace. The team has started hot at first in both contests. Then the backups come in, and the other team makes a run. The backups need to concentrate on their defense as a "unit". Players have to pay attention to their teammates' tendencies so they can better play defense with them. I don't know if it's a lack of defensive communication, a lack of actual effort, or something else, but the second unit has to come in with a mindset of putting the clamps on the opponents and maintaining the pace. That means good defense, better turnover ratio, and fewer mistakes.