Share All sharing options for: Game 4: St. John's vs Siena

Bonus ambiance - a tour of the historic Palestra from PressPassTV (video link, loads in new window)

This weekend, St. John's travels to the historic Palestra in Philadelphia, PA, to take on the Siena Saints and the Temple Owls in the Philly Hoop Group Classic.

Known for their frenetic style, the Siena Saints will be tough competition for a team that has had problems maintaining possessions in past years. A win over the MAAC's Saints will be a nice feather in the Red Storm's cap... or I suppose headband would be more appropriate. Even though the games aren't on TV, the Hoop Group games are a chance to gauge where this team stands nationally. 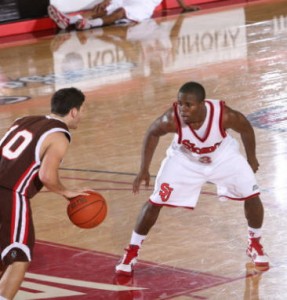 It was tough to listen to, tough to watch, especially when the team found themselves giving up 44 points and 70% shooting to an Ivy League team in the second half, while shooting 34.3%. Even with the marked advantage in offensive rebounds in that half (10 to 2), the sharp free throw shooting (12-14) and the lack of turnovers (5 to Brown's 12), that is a cause for concern.

There is no excuse for the lack of help defense, the lack of recognition on back cuts, and the sometimes-slow close-outs displayed last Friday. Yes, the Bears made some shots, and St. John's went cold, but Brown has only topped that level of offensive efficiency against lowly Maine. Hopefully, practices have focused on improving the defense against not only fast breaks, but against cutters to the basket.

St. John's has really shot the ball well from the perimeter, and has cut down on the turnovers. The guard-oriented lineups have been good from the outside. Those same lineups have given up a number of shots at the basket, and too many fouls. The occasional pressure defense hasn't yet taken offenses out of their game, and has led to the fouling and the scoring; this needs to change. Additionally, the team seems to forget that some teammates are listed as "forwards" in the game program, and should get the ball in the paint, draw fouls, and provide some offensive balance.

One problem in playing Siena is that their players work so well as a unit. Each player is a threat on offense and defense, and their team shows the veteran savvy coaches often talk about. Their pressing defense is at the heart of what they do. The Saints create pressure by making the whole team bring the ball upcourt, trapping and pressing both in the backcourt and at the halfcourt line.

This pressure often leads to turnovers. But it also serves the purposes of forcing players out of their comfort zone and encouraging opposing players to think they have open lanes to the basket, which are quickly covered by help defenders. This coverage affects a Siena opponent's offensive rebounding; players take shots before their forwards are in position to clean the glass and give scoring a second chance in the halfcourt sets. Even when the Saints turn the ball over - which was rare last year - or shoot poorly, Siena is always in the game because they concentrate on disruptive defense, like Rick Pitino's teams. And they do not foul; their positioning and anticipation is fantastic.

The Siena Saints are a little school that could, knocking off Ohio State in the NCAA tournament last year, and playing Louisville close. That same team, however, struggled last November against good teams, and came on stronger in the spring. Like last year's team, these Saints do not shoot 3-pointers and play at incredibly fast pace, pushing off of turnovers, opponents' makes, and opponents' misses. Though they are still putting up shots, Siena is turning the ball over more than they did last year.

Offensively, Edwin Ubiles is the closest thing to a go-to star, playing heavy minutes and taking a number of the tougher shots. Guard Clarence Jackson isn't shy, especially from beyond the arc. Ryan Rossiter - brother of Davidson's Steve Rossiter and a Staten Island native - doesn't shoot as much as his teammates but has range, well-rounded defensive ability, and rebounding acumen. Rossiter's parents may be in the stands, go on down and say hello.

Alex Franklin handles the defensive rebounding with Rossiter and gets to the free throw line a lot. Ronald Moore's value is in his crafty ballhandling and ability to run the offense/ make plays with the pass; though his turnover rate is certainly not as low as an elite guard's should be.

The team has not played its bench much. Sophomore Downey is more likely to shoot but hasn't been effective this season. Staten Island's Anosike is on the court to defend and rebound; he's a pretty good athlete.

I add a paragraph to work in that, according to Bill Raftery, the Franciscans built Siena College on an old asparagus farm outside of Albany. Now you know, if anyone asks.

The Red Storm's modus operandi this season has been to run up and down the court, creating shots on the break and with the dribble, with decent success... even if it doesn't always look pretty. But so far, the players have been very efficient with respect to their scoring. Can they keep it up? DJ Kennedy has been unreal, especially with his newfound ability to hit from distance; he has drawn fouls as well. Paris Horne plays fewer minutes but is more likely to put a shot up, similar to Dwight Hardy. Hardy has doubled as an extra ballhandler. I would expect to see a lot of minutes for him against Siena.

By percentages, Burrell and Brownlee are the team's best defensive rebounders, followed by... Malik Boothe. Chew on that for a second. Boothe and Kennedy lead the team in number of rebounds at 9. The Red Storm haven't had much of an interior presence at either end.

But what will the team look like in a more serious game, where they aren't favored to win? Will 10 players average 10 minutes or more? This game will require Boothe and Stith to bring their A+ ballhandling game, and for the players to observe before they pass. With the athletes on this team, there is a chance to win if they shoot well.

Don't Get Rattled. Against Siena, so much of what they do is predicated on handling their pressure that the keys will relate to this - keeping composure. I don't expect this team to try and slow down the Saints; they will want to win fast. So the first key is for the players to keep their heads. Make smart passes, even if they are slow and deliberate (yet accurate) passes. Know when to pick up the dribble and when to force the dribble between two defenders. Know when to take the shot and when to look through the options. The Saints switch their defenses often, working with a good deal of (effective) zone.

Defend the Basket. Siena will want to run to the basket on offense. Their wings will find themselves in good position to receive passes going towards the rim... or just under it. Someone has to get back and stay between the ballhandler and the basket on every single possession. Without fouling.

Defend the Basket From Rossiter, Franklin, etc. Rossiter and Franklin are absolute beasts on the defensive glass, with great anticipation, positioning, and strong hands. The Red Storm needs to negate them and get some offensive rebounds. And don't turn the ball over while looking for someone to pass the ball to when trapped under the basket. Second chance opportunities - and quick outside jumpers off of an offensive rebound - could be the difference in this game.

With Authority! The Red Storm have to make sure to get good shots - not off balance shots, not shots at the end of the shot clock, and not drives that become offensive fouls. Patience and crispness are key. They need to be crisp in their screening, and active in their movement with and without the ball to get the Saints' defense off balance. And if they can draw some fouls on strong drives, that would be a bonus.

Take Advantage. The Saints are susceptible to scoring droughts, and St. John's has to take advantage of those minutes, advancing the lead until the next Siena onslaught. The Red Storm have to remember not only to not get rattled - but to not get too excited and piss away good chances to score.