Ambiance: Dennis Green - We let 'em off the hook rant (video link, pops up in a new window)

The Red Storm welcome the Georgia Bulldogs as part of the SEC/ Big East challenge doubleheader.

Unfortunately, St. John's is the undercard; Connecticut and Kentucky clash in a matchup of big programs and big coaching egos (and long-running beef between Calipari and Calhoun). In comparison, Norm Roberts and Georgia's Mark Fox seem awfully meek by comparison.

St. John's is coming off of a fairly competitive game against the Duke Blue Devils down in Durham, NC. Even with a loss, there were some good elements that came from the game that remind people that maybe, just maybe, some kind of surprising turnaround might be in the offing for the Red Storm.

(Remember this: it is rare for a team - even one returning almost all of its minutes - to go from the kind of team that goes 5-13 in conference with 13 blowouts to one that goes 9-9 or better. St. John's may strangely be that team.) 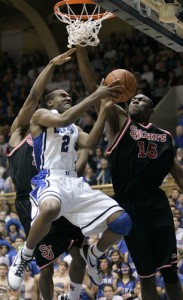 But that loss on Saturday was still a loss. St. John's might have led for 4 minutes, but they only came close to tying once after that; Duke had the game in control. So despite the promise, the Red Storm still have a lot to prove - including improving on defensive lapses, patience in the halfcourt offense, developing a solid third scoring threat, and cutting down more on those dogged turnovers.

But credit has to be given to whatever Coach Roberts said to them at halftime; DJ Kennedy came out looking to make plays, and while Duke scored the same number of points (40) in the second half, St. John's put up 47 to close the gap.

A little. Georgia won't be as tough; the game is more winnable.

The next opponent is Georgia, and so far, the Bulldogs (or "Bulldawgs") have been mediocre in new coach Mark Fox's first month. They have lost to an okay Wofford team, a solid Alabama-Birmingham, and a decent Virginia Tech. Star forward Howard "Trey" Thompkins, who was the second-leading scorer on the USA National under-19 squad this summer, missed all 6 of his field goals and scored 5 points. But the team was actually more of an efficient scoring machine, with 7 of 15 shooting from Travis Leslie and contributions from Dustin Ware and Price.

Still, Georgia is finding their way early in the season. This is the kind of team that can be trouble - if you're the opponent the day the game starts clicking for them, and they gain confidence and pull off a big road win. St. John's does not want to be that victim. They are who you think they are. Don't let the 'Dawgs off the hook. And St. John's needs to give the fans a reason to come out of hibernation in this, their first game in Madison Square Garden.

Trey Thompkins is the star of the team and the main scorer; he takes 30% of the team's shots when he's on the floor. Thompkins is an excellent defensive rebounder and can get shots off from all over the court... but he's not always accurate and is prone to turnovers. Like the rest of the team. The only member of the Bulldogs who is not loose with ball protection is slashing wing Travis Leslie; he also takes a huge chunk of shots while on the floor, but plays 24 minutes per game. Leslie can draw some fouls, and foul some opponents. Dustin Ware is the lead guard; he can garner some steals and also give the ball up. He's good at drawing fouls and hitting foul shots, but not as good at shooting in live action.

Gardner-Webb transfer Ricky McPhee is a pretty good shooter at 37% of his threes; he's taken 70% of his shots from deep. Consequently, he doesn't draw fouls. The rest of his game is decent; he pulls down some defensive rebounds and is willing to pass the ball. Chris Barnes is a decent rebounder and provides some blocks, but so far, that's been it; he's an errant shooter and a poor free throw shooter.

Albert Jackson is huge and has started 2 games. Like St. John's Dele Coker, he's a shot blocker who doesn't get many minutes. Jeremy Price is also big, and is effective inside. there are two other guards who play about 10 minutes per game, but Georgia tends to go big when they go to the bench.

DJ Kennedy's been earning for his all-around play. But what's around him? Sean Evans made some plays, and seems to be remembering what makes him a starter and a force on this team - his aggressiveness. With a reduction in his turnover rate so far, he's been a great #2 to Kennedy. But to this observer, it's become apparent how much they could use Anthony Mason Jr. Or some impact play from Justin Burrell. Or for someone else to become a creative scoring force.

Of course, not only is Mase injured, but Justin Burrell is out for at least two weeks with a high ankle sprain. Georgia is the kind of team that could use another strong defender; hopefully Rob Thomas can make it back from injury to play some spot minutes. The starting job will likely go to Dele Coker or Justin Brownlee; I give the nod to Coker. Dele is more of an interior defensive presence and played a hell of a game against Duke - 19 minutes, 5 points, 6 rebounds, 3 blocks only 1 turnover and 2 fouls. He has some learning to do, and playing against a thick-bodied, big-boned, grits-eating Georgia team is a good time to practice against similarly-sized opponents. Brownlee will get some minutes as well; he's been very solid, and moves well without the ball.

Paris Horne made some plays, but looked like he was pressing a bit. But it was a better game from him, and the team needs his impact play. Boothe was aggressive in getting to the basket, and needs to continue that play to make an impact. Dwight Hardy had a nice stretch on the court, and knows to take some shots at the basket when the outside shot is not falling; but it would be nice to see bigger numbers in the 3-pointers made column in the stat sheet. Omari Lawrence was used on defense against Singler, and the staff seems to like his defensive ability. As announcer Jay Bilas mentioned, Omari will learn some lessons from his defensive play on Saturday.

Pack In the Defense. Trey Thompkins is the player the Red Storm need to stop. His game is more varied than Andrew Nicholson's of St. Bonaventure, and the Georgia offense supposedly borrows from the Lakers' triangle offense, and Sean Evans will need to chase him around. But the only place the 'Dawgs can do much damage is inside, even though they have averaged 13 3-pointers a game (shooting 4 per contest).

Don't Get Sucked In. St. John's has to rebound without the injured Burrell on the floor, and take those rebounds and run. If they are not cleaning the defensive glass, the Red Storm will find themselves in an ugly, sloppy, slow-paced game. I mention Burrell because as some posters have pointed out, he is very good at boxing out and allowing others grab the rebound. It's smart, selfless play, and Brownlee and Coker have to replicate that. Moreover, given the lack of guard depth and the athletic ability of the Red Storm, they should be looking to run instead of guarding hefty players in the post with 3 or for credible post players. the team has to win the rebounding battles at both ends to run and control the game.

Be The Talked-About Undercard. Georgia's just not that good. And St. John's will enjoy their second nationally-televised game, at the famous Madison Square Garden. Unfortunately, they are the opener of a doubleheader, whose second game is the University of Connecticut vs. the Kentucky Wildcats, a game that will certainly be more exciting than anything the Garden has seen in a while. St. John's has to put on a show, running Georgia out of the gym, playing tight interior defense, and putting a big lead (or leash?) on the Bulldogs. This Storm team has a lot to prove; they need to beat on opponents that are well-known schools and build that respect.

Protect the Ball. The Red Storm needs to remember to spread on offense on breaks, and in the halfcourt, to take good shots. Sometimes, the right shot is taken. Sometimes players get too eager and turn the ball over or take an early shot clock look while the rebounders are still setting up. While Georgia has the look of a slumpbuster, St. John's can't get too aggressive on the court; these are SEC players, not Stony Brook.

Don't Settle. Even against the Bulldogs' size, St. John's has to look to get to the rim and draw fouls instead of settling for outside shots that will still be there later in the shot clock.