Ambiance: The Office's Andy Bernard. He went to Cornell, you may have heard of it. (pops up in new window)

Monday evening is the Holiday Festival, championship game, where St. John's will try to hoist the trophy for the first time in years. Cornell, however, stands in the way. 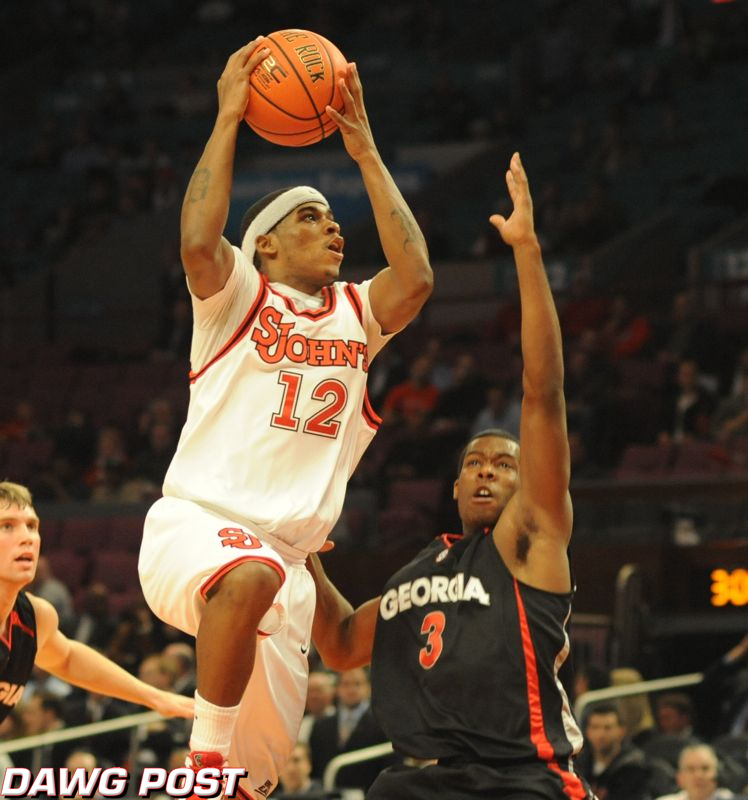 The championship game of the 2009 Holiday Festival pits the two favorites, St. John's Red Storm and the Cornell Big Red. It was almost not to be; both games required strong late-game efforts for the teams to advance. St. John's fought off a determined and scrappy Hofstra team - one that had not been to the NCAA Tournament for much of the decade but nonetheless has won many games against lower-level competition (see what I did there? Responded to Hofstra's athletic department smack talk) - with relentless and tenacious late-game defense.

Meanwhile, Cornell coasted for a while, went cold, and the crafty Davidson Wildcats slinked in with clutch shooting and excellent ball movement. Missed free throws allowed Cornell to take the game into overtime. Davidson still couldn't be shaken until a 30 foot jump shot from Ryan Wittman at the buzzer brought the Cornell players onto the court and made the Cornell fans' hearts start beating in the proper rhythms once more. A fantastic finish to a fantastic game.

On the season, Cornell has brought their excellent offensive attack to Alabama, U Mass, and Syracuse; they have played a home game against Seton Hall as well. The Big Red have combined great and consistent offense with a permissiveness on defense that allows teams like, say, the 3-8 Davidson back into the game. The Big Red can beat St. John's, if the Red Storm allow them to score freely and put up offensively offensive performances like today's against Hofstra. But the Red Storm's swarming defensive ability and shot blocking can really help erase many of the other inefficiencies.

Heckle the Cornell fans at the fantastic Cornell Basketball Blog. And you may know that Cornell forward Jon Jaques wrote blog posts for the New York Times' sports blog, the Quad.

Cornell is led by 6'6" small forward Ryan Wittman and 7' center Jeff Foote. Wittman is a great shooter; they often run him off of screens for shots at the top of the key. His stat lines over the 4 years at Cornell have been almost disturbing in their similarity. He takes a good deal of shots, and gets most of his points from beyond the three-point arc (but is a very good jump shooter inside the arc). He takes the occasional free throw, gets the occasional rebound, and doesn't foul much (perhaps because his defense is not physical). I think he is talented enough the get a look from the NBA, but that might be just my opinion. Errick Peck plays on the wing as well; he has some athleticism and talent, and I would expect him to get some time against St. John's.

Up front, Jeff Foote sees a lot of action. He is tall and went off for 20 points in St. John's win over Cornell in last year's preseason NIT. Foote also continues to score at a solid clip. His rebounding work and shot blocking are commensurate with his size, but he could stand to turn the ball over less. His stats don't show it but he's not a bad passer. He's not fleet of foot. Mark Coury gets some time up front, he can rebound and score efficiently. Also playing in the post is Alex Tyler, whose job seems to be to foul and hit people; he's hit 4 of 21 field goal attempts. The aforementioned Jon Jaques is a willing shooter but doesn't play many minutes.

The backcourt starts with Louis Dale, one of the few players who will be new to St. Johns; Dale was injured last year when the Big Red and Red Storm met last year. He can create space and is a gifted passer, though he seemed a non-factor for much of the game against Davidson. Shooting guard Chris Wroblewski is a solid shooter and scorer, and if Wittman is bottled up, he can hit a number of shots. Geoff Reeves plays a 3-point shooter role when he's on the court, and he can hit well from distance.

St. John's is receiving much love from the local papers after dispatching the pesky Hofstra Pride. And some love from popular national basketball columnists, listing the Red Storm as part of their top 25 (Goodman, Parrish). It's great to get some publicity, but St. John's struggled a little with the physical Hofstra Pride, only taking the lead when they buckled down and held Hofstra to a single point over the last 6 and a half minutes. The Pride aren't great scorers, but they had their moments. Facing actual jump shooting, sharp-cutting ballers in Cornell is a different kind of task, requiring defensive dedication, especially on the perimeter.

Once again, Kennedy just made plays. He was joined by Justin Brownlee; once he got his 2 bad shots out of his system, Brownlee was a defensive and rebounding force, being big, long, and blocking shots. Malik Boothe made some nice moves on offense, and helped to get Chaz Williams in foul trouble; the little Hofstra guard was putting up points despite Boothe and crew's defensive efforts. Dwight Hardy also had a very good game; in extended minutes, he showed the form that makes him a real find for the staff, defending credibly and scoring with crafty drives and the outside jump shot.

Playing Cornell will require a strong effort on both sides of the ball; but the team will need to score. Last year's game featured a bout of efficiency from the Red Storm up at Boston College's home arena, with Boothe (14 pts/ 9 ast), Kennedy (22 pts/ 6 reb), Mason (24 pts), and Burrell (11 pts/ 11 reb) all scoring in double figures. Even Dele Coker, Phil Wait and TyShwan Edmondson scored a pair of points each. This year, Brownlee and Coker will have to replace the production of those missing players and Burrell, while doing a better job on center Jeff Foote (20 points last year), while someone will have to replicate the defensive effort of Mason and Kennedy on Ryan Wittman, who shot 9-24 from the field in the prior meeting. It takes a team to stop a great shooter - constant attention, regular bumping, and never letting him square up on the secondary break or off of the screen.

Bother the Shooters. Ryan Wittman, in particular, needs to have a"bodyguard" with him at all times, bumping, bothering, and dislodging him from the places on the court where he wants to get comfortable shooting. But Wroblewski can shoot as well, Louis Dale is a threat. This team may look like old covers of the Hardy Boys books (I keep expecting to see a player on the roster named "Chip"), but they are shooting assassins.

Counter the Droughts. Letting a team with excellent offensive players and three-point shooters hang around is a recipe for disaster. The Red Storm have to counter the droughts with defense, traps, turnovers, and they have to get running the other way to draw fouls with their quickness.

Ball Protection. The sloppy ballhandling allows crappy teams to hang close in too many ballgames. Cornell is not very good at forcing turnovers, and this means that the Red Storm have to make sure not to give them any with errant passing, bad drives into the teeth of the defense, or sloppy ballhandling. If the Johnnies can thief the ball and make this game a track meet, all the better for them.

Like a Window Washer. Clean the glass. Sean Evans and Dele Coker, among others, have to maintain position and own the glass on both ends. That kind of ugly play can really make this game the kind of mudwrestling match St. John's can win.