Where have you gone, DJ Kennedy?

Share All sharing options for: Where have you gone, DJ Kennedy?

This season, with the emergence of Dwight Hardy and Justin Brownlee, you may have forgotten about D.J. Kennedy. The Pittsburgh native has been a rock for the Johnnies, a jack-of-all-trades baller counted on for toughness, leadership, and fearlessness. He was also the one player on the roster with some possible NBA interest. And this year...

Did you know that D.J. Kennedy is shooting a cool 50% from behind the arc in conference play?

And that with 3.2 assists, Kennedy is leading the team in dimes?

You might not know that... because there's something he's not doing. He's not shooting. At all. Where have you gone, D.J. Kennedy, a fanbase turns its lonely eyes to you. A closer look, after the jump.

In the 5 non-conference games before Big East play, he took 56 shots. In the 5 conference games since, he's taken 30 shot attempts. In conference play, he's only taking 11% of the team's shots while he's on the floor, a far cry from the past two years, where he was the Red Storm's most aggressive, and possibly best, offensive player.

(Caveat! I added pace information so you know that Kennedy did play in a pair of fast paced games - Wagner and Fordham -which elevates the number of shots taken. But so table is easily understandable, I'll focus on the number of shots DJ takes in each game, which gets to the same point I want to make.) 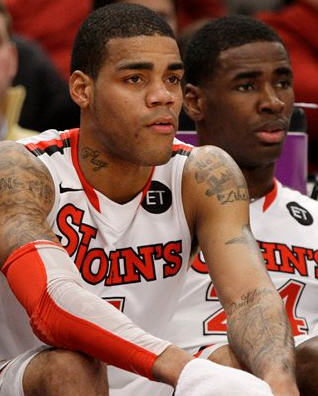 He WAS aggressive on offense in the West Virginia game, drawing 12 fouls. But since, he hasn't been able to find places on the floor to make offensive plays. Kennedy has filled the stat sheet in other ways. On a team that's been easy to key in on - keep Brownlee and Burrell from deep position on the block - the Red Storm could use another scoring option.

Part of Kennedy's lack of shots could be deference to Justin Brownlee and Dwight Hardy, who have become the team's first and second scoring options. That pair have nearly doubled their floor time compared to last Big East season. That means there are fewer possessions to go around; Brownlee and Hardy love to make plays (see table below). Justin Burrell is playing slightly more minutes, and shooting about the same percentage of the team's shots as last year.

But Kennedy... he's making the impact of a specialist, at best, in conference games. Or the impact of a guy who isn't able to find scoring opportunities. He's been quieter than he was freshman year, where he just stopped shooting for a time in Big East play. The minutes are there.

But D.J.'s simply not looking for his shot, which makes the Johnnies more predictable, more stagnant, more of a jump shooting team (& they're not great at jump shooting). At his best, Kennedy's slashing draws the defense, creating shot opportunities for everyone else on the floor.

Does Kennedy's reluctance to find scoring opportunities have to do with him being more careful after the close call at Wagner and the debacle at Fordham, where, like the rest of the team, he may have been too aggressive? In both games, he took around 30% of the shots; and in both games, a weaker opponent had a chance to win at the end. Wagner couldn't close the deal, and Fordham did. The staff may have told Kennedy to stop hunting for points as wildly as he had been, with good reason - those weren't all good shot ideas, and hurt the team's ability to find offensive rhythm.

Whatever it is, Kennedy has been tentative, a single-digit scorer in 4 of his 5 Big East games. The staff needs to get him on track, get him drawing fouls, get him scoring points - find places for Kennedy to be creative going to the basket with his craft and tenacity.

It's great that he picks up steals and makes an impact in the passing game. But this team is searching for some more scoring, and he has to be one of the solutions. He's been the go-to guy in the past; he can be a strong scoring option again. It's the