Share All sharing options for: Game 18: vs Cincinnati Bearcats

For the St. John's Red Storm (11-6, 4-3 Big East), getting a bid to the NCAA Tournament is going to be a tenuous high-wire act. There's no realistic reason to believe that this team can smash through the Big East Tournament for an automatic bid. And with the early season Losses That Shall Not Be Named, the margin for error is razor thin.

We showed video just to break down how the turnovers occurred so we can kind of analyze and get to the cause or the origin of having 25 turnovers. They can see for themselves that the majority of them were unforced, whether we’re bouncing the ball off our foot or just not jumping to meet a pass or whistling one over the top into the fourth row. So just better judgement, better decisions, closing down distance between passers and receivers – what we call ‘jumping to meet a pass.’

Most of all, the team needs to get back on some winning ways. The most important thing for the squad is to win those games they're supposed to win. There are four Big East home contests that will played on-campus at Carnesecca Arena, the 6,000 seat gym that can really rock with rowdy students, longtime fans, and Queens residents when it's filled.

The toughest of those games? Tomorrow's tilt against the visiting Cincinnati Bearcats (16-3, 3-3 Big East), who look to recover from a pair of losses on the road and make a play for the right side of the NCAA Tournament bubble.

Did You Know? Bearcats guard Sean Kilpatrick of the Cincinnati Bearcats was said to have accepted a scholarship offer from St. John's and former coach Norm Roberts... then said it was a rumor... then said "it's not you, it's me" and moved on to other schools. Alls well that ends well, I suppose, though his story is still to be written.

More on Cincinnati's strengths, weaknesses + Keys to the Game, after the jump.

Despite the pretty number that appears next to the Cincinnati Bearcats' name (25) in the Associated Press poll, the Bearcats are most likely very similar to St. John's - maybe the 30th or 40th best team in the country, possibly less than that. Their early schedule was an incredible cupcake buffet of SoCons, MEACs, Summits, local minnows, and and a flailing Dayton Flyers team that can lose to anyone who makes them take jump shots. The gaudy 16-win total feels hollow when its noted that the non-conference schedule ranks as 337th in the country according to Pomeroy's site, linked above. I should add to be fair - Xavier is a team with a pulse, though they, too, are down.

That doesn't mean the Bearcats aren't dangerous, and better than last year. Last year, you may remember the game was billed as the Lance Stephenson Returns Home! Show, played at Madison Square Garden, the big stage where he won all those city championships. The crowd was into it, the Garden Rumbled... and the game was an overhyped dog. It was a sludgefest of missed shots and turnovers, ending with some Dwight Hardy scoring and free throws to finish the game.

The Bearcats have moved on to a more cohesive kind of ball, with fewer ballhogs who pound the rock into the wood like a carpenter hammers a nail. The team looks to go inside to Yancy Gates for post scoring. As a proportion of their shots, the team jacks up a lot of three-pointers as well (34.8% of their attempts, 4th in the Big East). They made a solid percentage in non-conference play, and they can get hot again.

The Bearcats use a pressure defense off of made shots, taking advantage of their length on the wings and active hands to force miscues. Their on-ball defense has been bothersome as well, and the team is blessed with athletic height.

There may be a change to the starting lineup; Sean Kilpatrick might get to be on the court at tip-off as he returns to his home state, starting for Ibrahima Thomas. 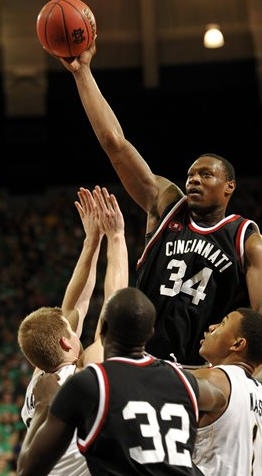 Cincy strength: Forcing turnovers. In Big East play, the Bearcats force turnovers on 23.6% of opponents' possessions. Their length is doing something right; up and down the roster, the Cincy guards' stats show results from their active hands and decent feet. The Red Storm as a team have to be better about moving the ball against pressure and attacking it.

Cincy strength: Interior defense. The Bearcats are protecting the basket very well, allowing opponents to shoot 46.7% inside the arc in Big East play. They are also keeping opponents from second shots, rebounding 68% of opponents' misses, often through the efforts of Yancy Gates and Ibrahima Thomas. Justin Burrell and Justin Brownlee will find Thomas and Gates difficult to score on.

Cincy weakness: Offensive IQ. The team's shooting percentages have been mediocre inside (43.9%) and outside (31.1%) of the arc in Big East play, though they are smart enough to take a lot of outside shots - after all, they're worth more points.

So why IQ? I believe former St. John's coach Fran Fraschilla, announcing the Notre Dame/ Cincinnati game on Wednesday, noted that the Bearcats don't actually *look* at the basket when they shoot.

It shows. Bearcats' shooters settle for deep jumpers (see: Dion Dixon, Rashad Bishop). Sometimes those jumpers go a full foot wide of the rim. And 265-pound Yancy Gates feels secure in taking 7-foot hook shots, or 14-foot jumpers instead of getting within 5 feet. He can make those, but why not get better position for a better shot?!

For all I know, they will play better tomorrow. Maybe they won't miss numerous layups (and free throws). Maybe they won't brick line-drive shots off the backboard. But every time I see the Bearcats, I just think about how they're filled with bad ideas on offense. Great athletes, but not always great ballplayers.

Cincy weakness: Defensive fouling. The Bearcats are second-worst only to Rutgers in the percentage of times they put an opponent on the line in conference play (FTA/FGA = 45%), which is strange for a team that was pretty foul-free in the non-conference games. This seems to be a team effort. Judging by some of their defensive lapses (lovingly described with photos by Bearcats Blog), it goes back to the IQ comments above - they lack defensive balance and awareness at times.

Battle Yancy Gates. Yancy Gates is very effective deep in the paint, but he doesn't stay there. Neither does his teammate Ibrahima Thomas; both are willing to take the deep jumper, which they are less effective at converting. The two forwards are a combined 0-6 in the Big East from three-point range and 3-27 on the season. St. John's has to defend Gates hard and early, keeping him from deep position, and making the easily-winded forward work hard for points. Dele Coker may see time checking Gates' big body.

Attack! Attack! St. John's has to make the Bearcats make defensive plays, driving on them in transition before they can really set up their defense. And if that draws a number of fouls, even better. D.J. Kennedy has played well against Cincy before, and he and Dwight Hardy can do it again.

Harass. Sometimes, they're hitting shots. And sometimes, anyone on Cincinnati can look horrible. St. John's has to make them frustrated, force missed shots, and run at their jump shooters. Forcing missed shots and turnovers defeats the Bearcats' pressure defense, to boot. Paris Horne is the defensive pest, expect to see a lot of him on Kilpatrick and Dixon.

Ball Protection. The Red Storm have struggled with turnovers; they are second worst in the league, coughing it up on 22% of their possessions. Hopefully, the Johnnies have worked on some of the ballhandling problems and will come with A+ concentration against Cincinnati's pressure.

Defend Perimeter Threes. In conference, the Red Storm have been decent at defending outside shots. But to win, they need to do better than allowing 35.7% shooting from beyond the arc against a Cincy team that likes to shoot from distance. Larry Davis and Kilpatrick have been the dangerous shooters in conference, but Dion Dixon, Rashad Bishop, and Cashmere Wright aren't shy about trying from distance.