Baselines: what do you expect from D'Angelo Harrison

Share All sharing options for: Baselines: what do you expect from D'Angelo Harrison

D'Angelo Harrison comes to the Red Storm with some big expectations after scoring 31 points per game for his Fort Bend Dulles Vikings high school squad. The aggressive scorer Harrison was coveted by many NCAA programs - he carried his high school team. He carried his AAU team. Can he carry a college team?

Like our preseason look at Phil Greene, we'll look into what we know about D'Angelo and list some expectations to look back on in March/ April when the Johnnies' season is over. It's important to remember that even for the best high school players, the freshman year is a year of growth, not one where every player hits the court scoring/ defending.

Harrison also has that swag that coaches love, predicting a Final Four for the Red Storm back in April. (He might be stepping back from that statement, what with three incoming recruits ineligible for the first semester).

But if the Red Storm manage to surprise with an NCAA berth, D'Angelo Harrison is bound to be a big part of the reason why. 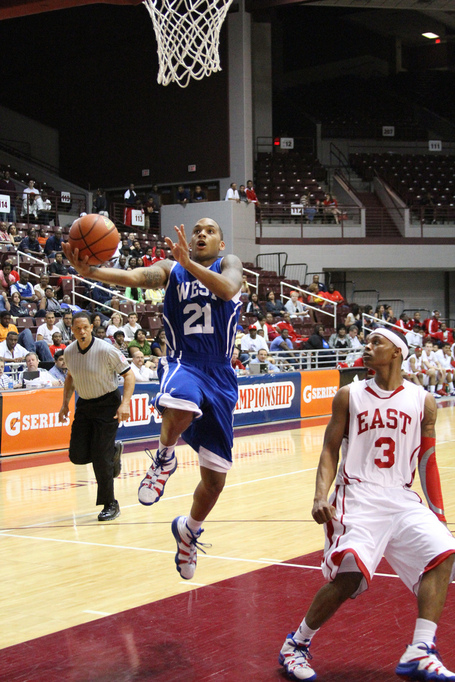 Harrison is known primarily as a scorer.

When signed, Steve Lavin called him "a dynamic combination guard... a prolific scorer", adding that "he plays with intelligence and intensity. He puts tremendous pressure on opposing defenses because he is constantly in the attack mode."

BUT. Harrison was also known to be defensively indifferent.

In the All-Star games he played in - the Derby Classic and the All-American Classic - he seemed to work hard on defense to make plays.

At the Derby Classic, for example, Slam Magazine said "dude is playing harder than anyone out there. Hustling all over the floor, making the right pass, and not playing strictly for the highlights..."

Without seeing it live, it's hard to see if he was prepared defensively, if he guarded his man well off of the ball. But Harrison made the effort to keep others from scoring, and did it with energy. He might be more of a gambler-type defender, lurking in the passing lanes and picking up steals without being a lockdown guy. That's exciting, but that hustle also sometimes creates defensive lapses.

That's much better than not giving a hot damn about defense, and Harrison seems to genuinely care about reversing that perception.

D'Angelo Harrison will be a bit of excitement for St. John's. How good he is will depend on:

Statistically, this year will be filled with rarities; it's rare for freshmen to have a chance to play big minutes and take a star scorer's complement of shots. I'd predict:

How quickly can Harrison improve under Rico Hines' guard tutelage? Will his aggressive/ attacking style get him hurt? Will his shot fall? Just a few days until we start to answer these questions - what do you think?