Baselines: what to expect from Nurideen Lindsey?

Share All sharing options for: Baselines: what to expect from Nurideen Lindsey?

Nurideen Lindsey's route to St. John's started with high school ball in Philadelphia. In the City of Brotherly Love, he scored bunches of points, earning him a college scholarship to LaSalle (Lindsey says he never actually committed).

Then tragedy struck. And his desire to play the game, to go to prep school, and to go to college faded. Two years and a detour to Redlands Community College later, Lindsey is set to suit up for the Red Storm as a highly anticipated, very philosophical, and very intense scorer who might be good enough to carry the Red Storm to a number of wins.

If he can carry the Red Storm to the postseason? Lindsey will earn comparisons to another great JuCo guard who carried the Johnnies, Marcus Hatten, back in 2002 and 2003.

A closer look at what we know about Nuri, and the beginning of the conversation of what to expect from the guard, after the jump.

John Giannini, who recruited Lindsey to LaSalle, had this high praise: "If you were going to pick one player with toughness and tenacity whose emotions can get the best of him and who has supreme confidence and quickness and the ability to score, [Allen Iverson is] the best comparison."

That's high praise. And it might not be entirely unfounded.

Now, Lindsey won't be Allen Iverson, let's get that out of the way. But Nuri's name was on NBA draft boards with comments like, "I haven't seen a kid with his quickness and scoring ability in a while... It's not easy to gauge given the competition, but I know fast, and he's fast. And I know scorers, and he can score in any league."

Draft Express has him 33rd among sophomores - that's without him facing Big East competition.

On film against JuCo competition, he was fast. And he could score like people can eat popcorn. His stats at Redlands were gaudy - 22.3 points per game, 5.2 assists per, 5.6 rebounds, 2.5 steals per game. He got to the line about once for every two field goal attempts, and nailed 74% of his attempts from the free throw line.

On grainy online video, Nuri's only drawback was his on-ball defense. It was a bit indifferent in a supposedly competitive setting. That could be a worry, but he seems intense and dedicated enough to improve upon that.

Nuri's quickness allowed him to take smart shots inside the arc - lay-ups and runners. But there are questions. What's his jump shot look like? He only took 23 shots from beyond the arc, hitting 8 (35%); does his shot have range? Was it too easy to get into the lane for him to take those shots? How will he work in the lane against high major competition?

And how will such an alpha scorer work with other young players who need their shots? Can he run a team as a scoring point guard? If he can really put up points for the Red Storm, he can carry the team while the younger players learn the ropes, adjusting to major college basketball. 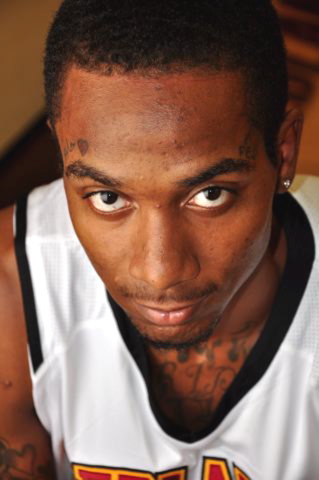 Is this burden too heavy for a first-year player?

My crystal ball says Lindsey will definitely try to be a dominant, high-usage guard - the kind of player who is always probing for his shot. I'd expect to see him on the floor for 30-35 minutes, taking a good number of shots (25-30% of the team's attempts while on the floor). If he can draw fouls and convert inside, he could be the team's leading scorer - and he won't even need to take deep jump shots.

Enough analysts are high on his potential that I will use that as Nurideen's baseline. And the Marcus Hatten comparison may seem audacious, but one should remember that Hatten's skill was in getting his shot off.

Hatten took more than 30% of his team's shots in both of his years (which is very high - think Kemba Walker's level of involvement in the offense). Hatten scored over 20 points per game on a pair of teams with no second scorer.

Hatten also wasn't very efficient. At all. He shot 30.3% in his second year from beyond the arc, and 28% his first; 47% from inside the arc his second year, and 44% his first year. But he got to the line, he was determined to make the team better, and he could pass, while picking up scads of steals and protecting the ball.

Lindsey's assist numbers won't be spectacular, at least not at first; if he can become a passer and run a team, he'll be very attractive to NBA scouts. But the ability to score like Hatten, to be the heart and soul of the young team - it's there.

(Unless I'm wrong, and I'll openly take this whole post back if I am.)