Baselines: what to expect from Sir'Dominic Pointer?

A look at incoming guard/ forward Sir'Dominic Pointer in Rumble in the Garden's Baselines series.

Share All sharing options for: Baselines: what to expect from Sir'Dominic Pointer?

By some recruiting outlets, guard/ forward Sir'Dominic Pointer (aka Dom. aka Ziggy. aka Dominique. aka Miz'Unique's twin brother) is the highest ranked of all of St. John's incoming players. Part of St. John's highly ranked, memorable-name recruiting class, Sir'Dom's mix of energy, physicality, athleticism, and potential moved him up the recruiting charts in a hurry last year.

Sir'Dom relocated from the Detroit area to North Carolina to attend prep school and improve his grades at Quality Education Academy. For him, unlike some of the other recruits, it worked.

Does highest ranked mean highest immediate impact? Will playing out of position at forward for the depleted Red Storm affect Dom's ability to make a mark on the Red Storm this season?

The Baselines series continues with a closer look at Sir'Dom, below the fold.

Pointer comes to the Red Storm with a lot of raw talent.

He's noted as a rebounder, especially on the offensive glass. His highlight videos invariably have a tip dunk shot - he's aggressive in tracking the ball off of misses. He's got the skills to handle the ball for stretches, a developing jump shot, an ability to slash and finish in traffic, and he's a monster in transition.

And then, there's that defensive doggedness. (photo by Gazelle Group) 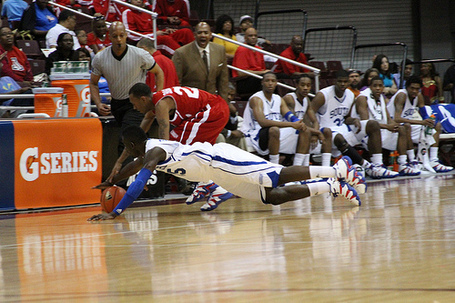 It will be what makes him a fan favorite. He's an active on-ball defender, and envisions himself as a defensive stopper. From what we've seen, he might be able to be that individual defensive pest from the moment he steps onto the floor at Carnesecca, even if he'll likely play a lot of power forward for the Red Storm in his first year.

Pointer's defensive lockdown abilities will be exciting to see, especially against teams like Notre Dame, who tend to put shooters at the forward spots (as opposed to bruising bangers). His quickness and relentlessness should earn him steals and blocks, and he'll be able to start fast break opportunities. Can he defend without fouling? That's a big question. He comes with a defensive reputation (which sometimes helps with the refs) and is quick and skilled at defense.

Athletic gifts got Sir'Dom on the recruiting map. But skills make the impact player, and Pointer has some room to grow. Pointer's ballhandling is decent, but will need to improve if he's going to drive the lane to score. His jump shot isn't often seen on the high school highlight circuit; like Nurideen Lindsey, his athleticism means he doesn't have to settle for outside shots.

Every year, there are freak athletes with great athleticism, 6'5-6'7 wing players who can jump out of the gym. Not every one of them - even at the top of the rankings - is excellent right out of the box. And that's not abnormal; lots of players come to college and need work on their finishing skills and shooting.

Take, for example, longtime NBA player Jason Richardson. Despite being a McDonald's All American before going to Michigan State, the skill aspects of Richardson's game suffered his first year. He shot poorly from outside (30%), poorly from the line (55%), and turned the ball over on 21% of his possessions. But he was an excellent rebounder and an excellent finisher inside the arc, and a bit of a thief on defense. A year later, his jump shot was money (40% shooting from the three), he turned the ball over a lot less (12% of his possessions), passed better, while maintaining his rebounding and steal numbers.

Pointer will likely play a lot in the post for the Red Storm, being one of three players who are 6'5 or taller. The matchup zone should save Pointer from tussling in the low post on all defensive possessions, but he will have to be physical. The numbers he puts up this year should be taken with a few grains of salt; he's not trained as a banging post player. But his quickness might afford him more opportunities to take players off of the dribble and even draw fouls, even as he gives up size and bulk at the other end.

I'll predict that Pointer is one of the players who doesn't routinely crack double digits - not because of ability, but because more scoring opportunities will go to Harrison, Harkless, and Lindsey, who are all noted to be deft creators and/ or shooters. Let's say Pointer plays 25-30 minutes per game, depending on foul trouble. His main contribution will be a solid rebound rate, a good 2-point shooting percentage (let's say just under 47%) and a steal and a block per game.