Baselines: what can we expect from Maurice Harkless?

Share All sharing options for: Baselines: what can we expect from Maurice Harkless?

Years ago, when Maurice Harkless was blowing up on the NYC scene, he seemed like the kind of player the Red Storm would once again NOT get. He was locally grown. He was long, exciting, the kind of coveted and talented that the Johnnies could only hope to get before the Big Boys in the Big East started recruiting him.

Back then, St. John's never got the impact hometown players to stay in New York. And true to form, Harkless committed to Connecticut.

Last spring, St. John's lucked up. Soon after the Red Storm made the coaching change, Harkless was feeling underappreciated by the Huskies' program. Meanwhile, the hometown school had gotten more serious about hoops, bringing in coach Steve Lavin. And after feeling appreciated by Lavin and the staff, Harkless committed to the Red Storm.

St. John's, a cool place to go for high school players in New York once more. The Baselines series continues with a look at what we might see on the court from Harkless, below the fold.

These attempts to set up expectations for each player is no exact science. Some players take to college very well; some players' ability to score, defend, and dribble carries over well from high school or prep school to college. Some players struggle to find their footing.

Will Moe Harkless be an immediate hit?

We know that Harkless is a smooth athlete, long and rangy. For a guy of his height - listed either at 6'6 or 6'8 - he can move up and down the court with ease. And he's not just an athlete - he can also shoot from all over the floor. Harkless has a solid jump shot and the height to get that shot off, even if his release isn't that fast. He can pull up in the mid range. He can get to the basket given a lane. He can find himself in the right place to accept a pass for a lay-up. 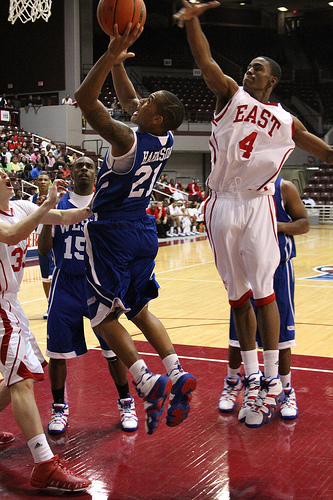 Moe understands the game and is willing to move without the ball  That skill to get to places where he can score (but not seeking the ball and creating off of the dribble) might lead to what some have seen as a negative of Harkless' game, a supposed lack of motor.

I can't speak to what specifically would make someone say that Harkless doesn't bring it on every play, or say that he drifts to the perimeter. But some players spend a lot of time thinking, especially in freelance settings like AAU ball. The go-for-self style of summer hoops, and its emphasis on creating shots for self, doesn't work for some players... and Harkless may be one of those ballers.

Young players often struggle with the level of intensity they need to bring on each play. It's common enough that it should be considered a part of playing freshmen for major minutes. Also common: defensive lapses, which also has been a comment about Harkless' game. The zone may cover up his defense, but that's an aspect of his game we'll keep an eye on.

Skilled players placed around where Harkless was in the recruiting rankings have not been big first-year scorers; they tend to take fewer shots than scoring point guards or driving shooting guards. But they also don't turn the ball over as much as those players either.

It might be that Harkless will be that sneaky player that makes the simple, smart plays, hits a shot here and there, and at the end of the evening, has 20 points for the Red Storm.

Let's use that concept for Harkless. Let's predict he'll use 19-22% of the team's shots while he's on the court. He'll be decent from the field, depending on how well the offense flows. If the offense involves a lot of isolations and one-on-one creation, I think he might struggle at times early in the year, and come on late. Even if the team has a good offensive flow, shooter/ scorers can have off periods - like Jeremy Lamb did for stretches before his explosive NCAA Tournament. Harkless will be learning all year how to harness his wide range of scoring talents to make himself an impact baller.

The Red Storm will need strong offensive contributions from Harkless, Harrison, and Lindsey to make - or get near - post season play.