The participating Big East bloggers were also polled about where they thought the various teams would finish. Some of the blog participants prefer to use a tiered quartile system system instead of figuring out exactly where the teams will end up in March's Big East standings.

There's some difference of opinion about West Virginia - who received a first-quartile vote, despite having high roster turnover only second to St. John's. Georgetown, Villanova, Notre Dame, and Cincinnati have some variance in their quartile positioning as well.

Speaking of roster turnover, let's review a Returning Minutes graphic from from our Mind the Gap series. The series looked at what players/ minutes/ rebounding each Big East team lost in the offseason: 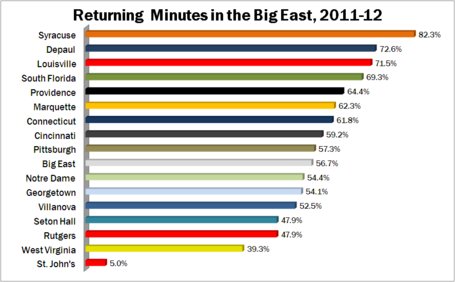 The Blog Poll (and the coaches poll, below) come with some obvious consensus expectations. The talented teams with the major returnees are a surer bet to stay near the top. Experience and talent will remain steady, even as the teams mix in high-end talents. Only Pittsburgh doesn't return more than 60% of last year's playing time. Will the lack of seasoning from players like J.J. Moore and Dante Taylor hurt the Panthers? 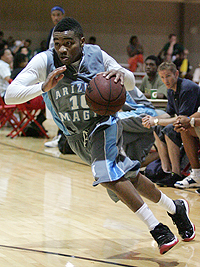 Poorer-performing teams with lots of returning minutes (Providence, DePaul, and South Florida) are expected to stay near the bottom. DePaul enjoyed an influx of talent, but a number of players have gotten injured, and the incoming talent isn't quite on the Top-100 radar.

South Florida has a nice point guard coming in by the name of Blake Nash - a superhero or soldier of fortune name if there ever was one - hoping to be Dominique Jones for the Bulls. (BLAKE NASH, SOLDIER OF FORTUNE pictured at left.)

Providence has a new - or A - dedication to defense.

The four teams with the fewest returning minutes - Seton Hall, Rutgers, West Virginia, and St. John's - are harder to slot. Despite not having many highly ranked incoming recruits, West Virginia's poll position is pretty good - likely due to the senior experience of Kevin Jones and Truck Bryant. And Huggins works hard to make sure his players on the floor force his physical defensive concepts on opponents.

Meanwhile, the three New York-area schools can be the source of a lot of debate; all have improvements, but also lose a solid amount of talent (we're going to talk about that more in the next few days with our friends from On the Banks and South Orange Juice).

It seems likely that none of the three will earn much separation this season, and all will be battling for slots in the NIT. But there is a lot of talent to go around the New York City area, with St. John's leading the charge after a stellar year of recruiting by Lavin, despite St. John's player eligibility issues. And the new St. John's players are very confident.

The Smoking Musket: I probably have WVU too high and Cincinnati too low, but that's probably me being a homer. Trust me, I'm trying to be objective here. It's so hard to figure out how the league will shake out because it never happens like we think and there are just so many good teams and unbalanced schedules, it makes predictions really hard. But hey, that's why we're here, right? If it was easy everyone would make preseason picks. Oh wait...

Orange:44: I can't wait for DePaul to only win one conference game again. Top and bottom 4's are pretty set. It's the middle 8 that will be tough to call this year. West Virginia could have swapped with Cincinnati. St. John's and Georgetown are probably going to be on the second page of the standings. Marquette will be the unexpected overachiever. I look forward to maybe the last ever year of a great Basketball league.

Hoya Prospectus: (Each group of four is in no particular order.) The Big East is no place to depend upon freshmen; SHU and Provy get a boost from new, capable coaches.

VUhoops: I went a little optimistic on Villanova, because I do think they have the ability to put something together this season. I went a bit pessimistic on St. John's because they lost a LOT of players and they also had thome academic issues with getting three of the freshmen cleared. I also think DePaul could sneak out of the basement a bit this season. Maybe.

Bearcats Blog: Yeah, I didn't pick DePaul last. There seem to be a solid top 4, and a deep middle. I think Rutgers could end up being a surprise team.

Blue Demons Nation: DePaul will finally get out of the basement.

Villanova by the Numbers: No matter how it goes, this will be a very sad season for Big East hoops. The end of an era. The end of a conference?

The official Big East Coaches' Poll is remarkably similar to our results:

There is a common wisdom growing that Connecticut, despite the loss of Kemba Walker, will be far better than what was predicted last year, where the Huskies went into the season voted tenth. And that wisdom also holds that the defending national champions will finish higher than they did last year, when they ended the year ninth in the Big East after tie breakers.

Notre Dame and Georgetown lose a number of stars from last years' teams, but hope to infuse new talented blood into their programs. I like Mike Brey to install his system and make some mediocre players into solid offensive performers.