Share All sharing options for: St. John's squeaks out 78-73 win over Lehigh in Steve Lavin's return

It may have been the loudest pregame roar since Willis Reed's limping entry in the 1970 NBA Finals.

After moments of incertitude, it was clear St. John's head coach Steve Lavin really was making his triumphant return from his prolonged absence.  Lavin, who underwent prostate cancer surgery in early October, surprised the Lavinwood student section and the rest of the fans with his appearance. The fact that he stepped on the court raised the excitement level in the Carnesecca crowd.

St. John's ultimately defeated Lehigh 78-73, but it was an arduous climb to a victory.  The Mountain Hawks led the Johnnies for about 90% of the game. In the last five minutes, the Red Storm's talent and conditioning eventually prevailed.

Led by God`sgift Achiuwa (21 points), Maurice Harkless, and Nurideen Lindsey (15 points each), St. John's was able to come out victorious in its first legitimate nail biter.

Everybody likes a good drama, right?

St. John's fans got a dramatic game from Lehigh on Wednesday night at Carnesecca Arena.  Lavin, who released a statement on Tuesday evening mentioning his progressing health and nearing return, surprised both his players and fans by appearing on the court.

"Coach Dunlap kind of nudged me to come back one game earlier than I was originally thinking," Lavin said afterwards.  "Last night, I was planning on coming back on Sunday."

We're happy that we were able to satiate our hunger or desire for the famous Lavin Lines four days earlier, too.

Though Lavin has not been in Queens to witness his team's development and teach the nuances of his system, the youthful Johnnies would make one think that he's been there all along.  The head coach had been planning practices and communicating with both the staff and players throughout the entire process. 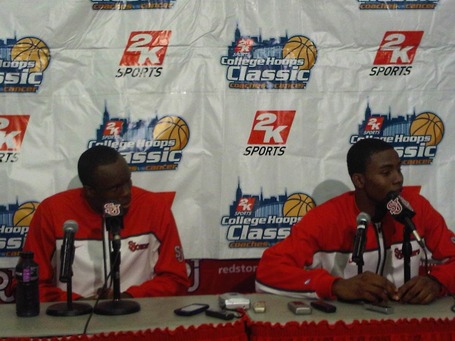 (photo of God`sgift Achiuwa and Moe Harkless by Tim Dimas)

"When he walked in yesterday, we were so excited," junior forward Achiuwa remarked.  "He never told us he was coming.  But we're really, really happy to have him back."

There will be more to come tomorrow on the Rumble on Lavin's return. But along with the hoopla and excitement illuminated by Lavin's return, there was also a game played.  Saying that there was a game played is actually an understatement.  St. John's needed every point, rebound, turnover, and foul to pull out a win over the Mountain Hawks.

The first half of Wednesday's game was eerily similar to that of Monday's victory over William & Mary.  The Red Storm came out flat both offensively and defensively and found itself in a 10-point hole going to halftime.  Like Monday, Lehigh was given countless open looks and seemed to convert each of them.  Lehigh scored its first 15 points on an opening perfect 5-5 from 3-point range.

"We have to learn not to dig holes like this," Lavin mentioned.  "We have to make a concerted effort to get out of the gate better."

CJ McCollum, the Mountain Hawks' best offensive player, was a main factor in constructing Lehigh's double-digit lead.  But his ability to carry the team tapered off. McCollum scored 19 points, but missed 10 of his final 12 shot attempts.

St. John's invite uncomfortable parallels with its first game with a poor first half. And then they struggled to open the second frame. But the Red Storm, guided by efforts by standout defensive specialist Sir`Dominic Pointer at the top of the press, used its 1-3-1 pressure to create fast-break opportunities.

That formula that gave the Johnnies its turning point.  With 8:25 remaining, Achiuwa intercepted a tipped pass and relayed the ball to Harkless who laid it in while absorbing a foul.  After converting the free throw following a Lehigh timeout, the Red Storm pulled within six and instilled doubt into the Mountain Hawks. The team had its running game going, and wore down Lehigh.

The game was in doubt in the last seconds, with missed free throws keeping the gap between the teams at one possession. D`Angelo Harrison nailed the final attempts from the free throw line with :02 seconds left to push the lead to five. And the crowd, having gone from the highs of Lavin's return, to a 16 point deficit, to a hard-fought comeback, to mistakes on defense and missed free throws on offense, could exhale and go home happy.

If there's a game ball to be given out, it has to be handed to Achiuwa (that's if you aren't giving game balls to head coaches).  The junior college transfer led St. John's with 21 points and 8 rebounds in 37 minutes.  Most impressively, Achiuwa achieved basketball immortality.

Asked if he could remember another game where he failed to miss a single field goal or free throw, Achiuwa answered honestly:

As we've mentioned time and time again, this young team should welcome any kind of experience that it can get. On Wednesday, St. John's got its first nail biting experience.  It's always encouraging to come out of a first exam with soaring success - it sets you up for the rest of the semester.

Next, the Johnnies are set to host the University of Maryland - Baltimore Country on Sunday at 2pm in Queens.  You can bet that Coach Lavin will be on hand, exhorting his team and teaching when they miss assignments in their defense.

With Lavin back, the Red Storm is ready to go into full-throttle mode.  The distractions of having to answer questions and uncertainties surrounding their head coach's return are over.  It's time for business or, as that slick man would say, time to put hammer to rock.