Share All sharing options for: Game 4: St. John's vs Arizona (Coaches vs. Cancer)

"We'll know where we are as a team within the next 3 or 4 weeks, but Arizona will be a great test for us." - Coach Steve Lavin, pregame

This early in the college basketball season, records aren't religion. So yes, the St. John's Red Storm's 3-0 record has come with balanced scoring, some stirring comebacks, and a lot of athleticism, but we can't speak about their accomplishments like they are truths etched in stone.

How good are the Red Storm? How good can they be? Should fans be worried about a team that struggled to handle William and Mary in the opener, a team that took 35 minutes to finally get on top of the Patriot League's Lehigh, and even needed more than the opening five minutes to get on top of UMBC? Or should fans look at the ability of the Johnnies to impose their running will on opponents and feel like the team is coming together?

The Arizona Wildcats are also a developing team, with talented youth merging with a core of role players who went on a deep NCAA run last year. The Red Storm get their first taste of basketball under the bright lights of their second home court, Madison Square Garden. And of course, Steve Lavin's recovery from prostate cancer makes for a great storyline in the Coaches vs. Cancer tournament.

See also: 5 questions with Arizona Daily Swarm | What to look for in the 2K Sports/ Coaches vs Cancer Classic

Sean Miller's Wildcats have struggled as much as St. John's, needing strong second halves to put their three opponents (Valparaiso, Duquesne, and Ball State) away. The Wildcats have been working to define their new roles after their main shot-takers, Derrick Williams (the #2 pick in the NBA draft) and Lamont "Momo" Jones (transferred to Iona) left the Wildcats. Williams took 24.8% of the shots while he was on the floor; Jones took 23.5% of the shots.

What that leaves is an Alpha-Dog Hole. Either some of the remaining players have to step up their efforts and hunt for their shots, or a newcomer will have a chance to be the player most likely to have the offense run through them.

So far, Jesse Perry (taking 22.6% of the shots) and Kyle Fogg (28.6% of the shots) have been the on-court offensive leaders. But the first halves of games have involved some confused, stagnant offense for the Wildcats - and a number of turnovers. Jordin Mayes has been handling the point guard duties, while highly touted freshman Josiah Turner has struggled with his role.

Kevin Parrom has returned from a summer that included getting shot over a girl in an apartment and the death of his mother to get back on the court. He does a little of everything for the Wildcats.

Did you know? This will be the first meeting of Arizona and St. John's. Ever. 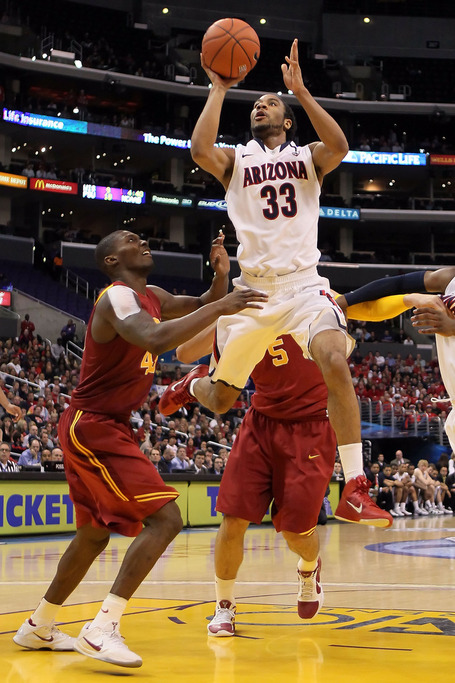 St. John's - which has allowed weaker opponents to grab 75.5% of the Red Storms' misses - will struggle to get offensive rebounds in this game. That's tough for a team whose best scoring options involve chaos and their athleticism.

Wildcats Strength: Finding ways to score late. Whether it's Jordin Mayes' shooting (46% from beyond the arc) or Nick Johnson's ridiculous ratio of free throw attempts to shot attempts (26 fta/15 fga), the Wildcats have found ways to get points when the shots aren't quite falling inside. The Wildcats have shot 47% inside the arc, by the way.

St. John's has also been able to score - and defend - late in the game, so the second half could be a real barnburner for both sides.

Wildcats Weakness: Turnovers, turnovers. The Wildcats' inability to get into an offensive flow has meant that sometimes, their offensive possessions end with a ball off of a foot, an errant pass, or just a dumb play. The Cats are turning the ball over on 23.5% of their possessions, and that's very high. St. John's pressure has a chance to be disruptive and generate points.

Wildcats Weakness: Slow starts. The Wildcats have struggled with their first halves, needing to wear down opponents and execute well in the second period to win their games.

St. John's start slowly as well, so it may be a matchup of two teams that are sloppy and permissive to start the nightcap of Coaches vs Cancer.

St. John's Strength: Owning the ball. The Johnnies have forced 19 turnovers per game (26.9% of opponent possessions), and have only turned the ball over 10.7 times per game (15.1% of Red Storm's possessions). Can the Red Storm keep that up against the Wildcats, who also turn the ball over and don't force miscues? Consider that the defensive pressure of UMBC forced 9 turnovers in the first half.

But Maurice Harkless has been efficient at getting his shots off without turnovers, and Sir`Dominic Pointer will have a chance to flash his defensive skills in front of a hyped up home crowd.

St. John's Strength: Owning the free throw line. And underreported part of the Johnnies' game has been their ability to generate points from the free throw line, despite shooting on 66.7% (and it's only that high because of God`sgift Achiuwa's 91.3% free throw shooting).

On the other side? While St. John's has taken 99 free throws (led by Nurideen Lindsey's 27 free throws attempted), Red Storm opponents have taken 30. This is partly a by-product of the zone, which permits threes and minimizes physical contact in the paint.

St. John's Weakness: The paint. Despite God'sgift's agility and Moe Harkless' doggedness, the Red Storm are weak on both sides of the offensive glass, giving up almost 35% of the defensive rebounding opportunities to opponents. Even the small teams can get second chances.

St. John's weakness: The depth. With only 7 players, how will the team look against two major conference foes? Will they foul more? Will Nurideen Lindsey get into foul trouble? Can Phil Greene or Malik Stith run the point if Nuri does have to sit for a long period?

Force turnovers. St. John's needs to create defense from offense. Nurideen Lindsey is best in space. Against a disciplined defensive team like Arizona, transition opportunities are a must.

Keep all seven on the floor. Arizona has a wealth of bigs, including Jesse Perry, Solomon Hill, Kyryl Natyazhko, Sidiki Johnson, and Angelo Chol. Arizona might look to get the ball in the paint and force St. John's most effective players - forwards Achiuwa and Harkless - to have to foul or let the Wildcat shots go in unmolested.

Don't be embarrassed on the glass. The Wildcats should win the rebounding battle in this one. St. John's has to know when to battle for the boards and when to back off and leave the glass be; it's tough to watch a team do that, but it's part of preservation, and keeping all seven scholarship players on the floor.

Smart shots. St. John's isn't hitting the three particularly well (23.8% from beyond the arc) and have been good about limiting shot attempts from outside. This needs to continues, despite Arizona's quickness and size. When St. John's tries to jack up jumpers - like some of D`Angelo Harrison's quick pulls - they're playing into Arizona's hands.

Defend the perimeter. Those shots the Red Storm allowed to William and Mary and Lehigh? Arizona can probably hit them too. The gaps in the middle of the zone? Arizona has the jump shooting talent to hit those given an opening. It'll be interesting seeing how often St. John's switches from man to zone in this game

Prediction: I think the Red Storm could show well. I think they could win. I think it's too early for the young team to win; I expect foul trouble and rebounding will be the key issues in a 73-62 St. John's loss that will look more competitive than the score. But anything can happen with Lavin at the helm.