For a match-up that was so highly anticipated throughout the off-season, Thursday's meeting with Arizona certainly did not disappoint.

As a St. John's fan, you may be disappointed by the outcome.

But as a basketball fan, you got everything you could have asked for.  The Red Storm fell to the Arizona Wildcats 81-72 in the second 2K Sports Classic semifinal.  Led by Solomon Hill (15 points) and Kyle Fogg (13 points), the Pac-12 power found a way to outlast their opponent despite many wild swings.

The Johnnies gave the Garden faithful a valiant and, to some, a surprisingly competitive performance. But St. John's two most prominent weaknesses were exposed; the team's lack of depth and propensity to allow open perimeter looks ultimately prevented the team from capturing its first high-profile win.

Nurideen Lindsey (18 points) catapulted his team from a 3-point halftime deficit to an 8-point second half lead, but fouled out with 5 minutes left.

For the majority of Steve Lavin's young group, this was the first opportunity to absorb the bright lights of Madison Square Garden in a game-setting.  The table was set.  Ranked opponent.  National television.  New York City.

Though both teams saw leads of at least 8 or more, the game was close throughout.  It was a battle of spurts - one team scored six, the other scored nine.  It made for an electric atmosphere in a building where only electric atmospheres fit the venue.

Both sides enjoyed the big stage, with fans from both sides chanting for their squads in a much more exciting nightcap - possibly the best game of a long day of basketball. St. John's looked to get out in the open floor and score utilizing its fast-break opportunities.  The Wildcats, who only turned the ball over 10 times (after averaging 16 in its first three games), didn't allow the Red Storm to optimize its greatest strength.

And Arizona also optimized the Johnnies' greatest flaw.  With the use of tremendous ball movement around Lavin's patented zone, Sean Miller's squad was tapping the well for open looks all night.  And, boy, did they take advantage.

"They run a zone, so we wanted to focus on taking those open shots," Miller said afterwards.  "We really took what they gave us."

Arizona converted an astounding 14 of 29 shots from behind the arc, accounting for more than 50% of their total scoring - which makes sense because about half of their field goal attempts were from downtown.  St. John's overzealous rotating provided their opponent with uncontested looks. 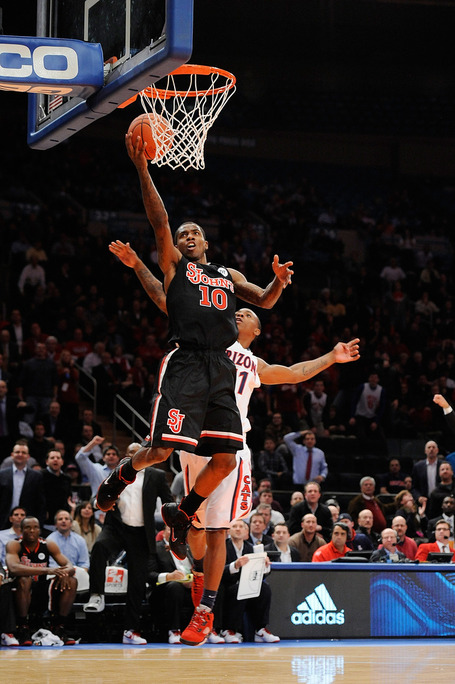 But through the hot shooting of Arizona, there St. John's was - winning 66-58 with about 7 minutes left.  Lindsey's penetration (photo at right by Patrick McDermott, Getty Images) and a surprising scoring spark from Phil Greene via a 7-0 run had the Garden rocking.

One of the major issues with running with a seven-man rotation is that if you run into foul trouble, there isn't an alternative.  Two of Lavin's most potent offensive threats - Lindsey and D'Angelo Harrison - had three fouls at halftime.  It was Lindsey's fifth and final foul with about 5 minutes to play that was the turning point of the night.

"It hurts not having his play-making ability, his quickness, and his skill.  No question [Nurideen] fouling out was an issue," Lavin remarked.  "He showed glimpses of his potential and the player he can become.  The key is sustaining it over the course of an entire game."

WIthout Lindsey on the floor, the Red Storm's offense experienced more stagnation and confusion.  Not only is Nurideen a tremendous scorer, but he's also the floor general.  The loss of him as an option proved costly.

No, St. John's didn't win.  But there are plenty of positives to take away from the performance - both encouraging and informative.

They proved that they can compete against the highest level of competition.  Arizona, guided by the former Pittsburgh point guard Miller, has a wide array of talent and a style that reflects what Lavin's group will see in the coming months.  A healthy balance of veterans (Hill, Fogg, Kevin Parrom) and young stars (Nick Johnson, Josiah Turner) makes the Wildcats such a worthy opponent.

As always, there's plenty of aspects of Thursday's game where the Johnnies will look to improve.  Lavin and his staff will continue to search for the correct personnel and systematic rotations.  Though St. John's did hold its own on the glass, there were too many second chances.  Good teams capitalize.

"You can see the growth from game to game," Lavin said.  "I have a good feeling that are ready to compete."