Second game of the 2K Sports Classic benefiting Coaches vs Cancer features a St. John's team that did many things right... but couldn't handle a late run by the Arizona Wildcats, losing 81-72. Along the way, we saw Phil Greene re-emerge to score points from the field, a lot of heart and swagger for a team with seven scholarship players, great team rebounding efforts, and Nurideen Lindsey's majesty.

We also saw Nurideen Lindsey's turnovers, a defense that allowed 50% shooting (and an effective field goal percentage of 54.3%), a late surge by Arizona that reminded all fans what it's like to play with seven scholarship players, and ultimately, a deflating loss for the small but active home crowd.

For Texas A&M, their first game was a surprise. The Aggies were the team that came in ranked and seemingly the most effective in the field, having hardly trailed at any point in the young season.

So of course, A&M was beaten early and often, falling behind by 31-9 at one point in the first half. It's been said that the first ten minutes that Mississippi State played was their potential, and the last 30 minutes were so-so; but what does that say about Texas A&M, who couldn't come closer than 8 points in the game?

The Garden welcomes the team from East Texas - near D`Angelo Harrison's native Houston - for the consolation game of the Coaches vs Cancer Tournament, the 2K Sports Classic. Read more on the matchup, and come back for the game thread at 3.30.

Did you know? This will be the first meeting between St. John's and Texas A&M.

For fun: a special video (Not necessarily safe for work.) - how Texas A&M has fun at home.

From our look at all four teams in the 2011 2K Sports Classic:

The Big 12's Texas A&M are ranked #19 in the AP poll and #18 in the Coaches' poll... The Aggies have dealt with bad news recently - Coach Billy Kennedy was diagnosed with Parkinson's disease, and star forward Khris Middleton is out for about a month. Coach Kennedy is back on the sidelines, and is excited to coach his veteran team to victories. Middleton's scoring and all-around high-IQ game will be missed.

Aggies Strength: Post offense. The Aggies score mainly in the post (and with some deep jumpers as well). The meaty trio of David Loubeau (photo below by Jonathan Daniel, Getty Images), Kourtney Roberson, and Ray Turner have been providing the scoring in the paint. And Texas A&M hasn't sought many points outside of the trio (we'll touch on their perimeter punch in a paragraph or two). 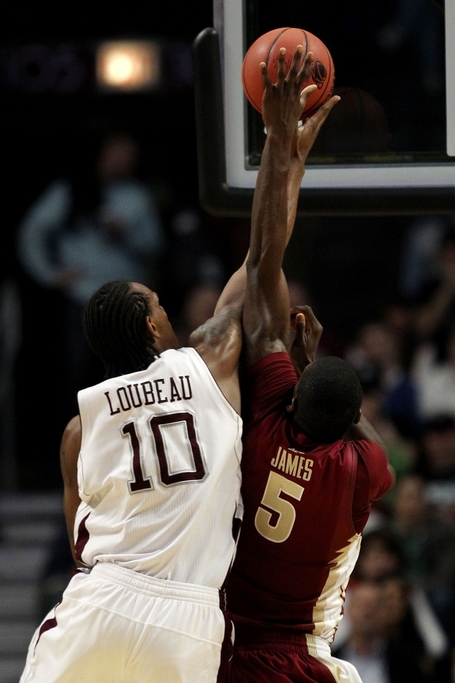 Having them lay an egg against Mississippi State's front line (shooting 5/18 inside - 27.8%) left the Aggies with few other scoring answers (see the perimeter punch below). The Johnnies want to run on the bigs - they're not particularly fast, despite their solid skills. But defending them in the paint will be a chore.

Aggies Strength: Man-to-man defense. At least in the past, and in the first games of this season, the Aggies were very good at playing a principled defense. They stuck with their men and made sure every shot was contested. Yesterday, Bulldog shooters found wide open spaces in the corners as Aggie defenders congregated in the paint.

Did the Aggies worry so much about the post play that they ignored the perimeter shooters?

Will that kind of space be available if Nurideen Lindsey can get into the paint as well as he did against the Wildcats?

Aggie X-Factor: Perimeter punch? Longtime readers know that St. John's zone is... permissive. Opponents will get some nice three-point looks up. While it's not the Aggies' style, and their strength is in the post, the gaps in the zone may be too tantalizing to pass up, especially with players playing back-to-back days. Who could light up the Johnnies?

Texas A&M sports a pair of good freshmen in point guard Jamal Branch and shooting guard Jordan Green, who both played AAU ball for Team Texas. (Did D`Angelo Harrison ever get to light them up with the Franchize All-Stars, I wonder.) Neither has been a huge part of the offense yet, but after yesterday's performance, Coach Billy Kennedy might make their light a little more green. Branch has been a very good passer, with a 5:1 assist to turnover ratio. He also went 2 for 2 from outside the arc yesterday. Jordan Green already starts for the Aggies in Middleton's place.

Then there's Elston Turner, the wing who transferred from the University of Washington. Turner shot 38.6% in his last year with the Huskies, taking 63% of his shots from outside the arc. As a starter for the Aggies, he's only taken 29% of his shots from the perimeter, trying to diversify his game from a strictly-perimeter shooter. He scored 13 points on 11 shots in the loss to Mississippi State. And he'll probably see quite a bit of Sir`Dominic Pointer this afternoon.

Veteran wing Naji Hibbert is a shooter who can hit some shots, but normally doesn't use many possessions. Left wide open, though, he could be a surprise scorer for the Aggies.

Force turnovers. This is the key to every game. But with sometimes out-of-control point guard Dash Harris at the controls, the Aggies can be forced into traps and miscues... and bad shots.

Assault the paint again. Yesterday, the Red Storm attacked with drives from Nurideen Lindsey and strong efforts on the glass by Maurice Harkless. That was a great plan, and will be a good plan against Texas A&M. God`sgift Achiuwa has to get more touches in the paint. A&M may single-cover Achiuwa, and he may have more chances to show his skills against a major conference opponent.

Fewer mistakes. It's both an issue with turnovers (Lindsey had 7 - a whopping 41% of his possessions) and with avoidable, over-excited fouls. St. John's two most effective players, Lindsey and Harrison, struggled with foul toubles all game. And those fouls negated the point advantage the Storm normally earn on the free throw line.

Open the floor. St. John's needs to keep the paint open by making enough perimeter shots to keep the defense from hedging inside. Phil Greene's two made threes, D`Angelo Harrison two mid-range jumpers, and Sir`Dominic's make all help diversify the Red Storm offense. Even though the team won't shoot 50% on jump shots any time soon, it helps the attack.

Run. If the game is going well, the Johnnies will frustrate the Aggies with fast break points and will draw fouls. This Red Storm team is only as good as its control. Can the Red Storm once again enjoy a hefty advantage on attempts at the free throw line, and many fast break attempts.

Prediction: I was so impressed by last night that I think the young Johnnies get their swag up and defeat the Aggies, 69-67.