"This is a group that you can look at and say 'I like the personnel,' but they've got to come of age and put guys away." - Steve Lavin, postgame

Just 19 hours after its defeat at the hands of Arizona Thursday, St. John's fell short of a win on the Madison Square Garden floor on Friday.  The Texas A&M Aggies outlasted the Red Storm 58-57 in a game that lacked beauty, grace, and all other synonymic adjectives.

The Red Storm put four players in double figures and attempted 35 more free throws than the Aggies, but couldn't get over the hump.  Nurideen Lindsey (12 points) couldn't knock down either of his two tries at the line in the final seconds. The Johnnies now head back to Queens empty-handed, 0-2 in the 2K Sports Classic's final two rounds.

Texas A&M went out to an early 10-3 lead by capitalizing on the Red Storm's recurring defensive flaw.  The Johnnies, as they did Thursday against Arizona, were allowing the open perimeter looks.  For the fifth consecutive game, Steve Lavin's young group dug itself an early hole.

St. John's spent the rest of the game chipping away at the lead.  Another offensive spark by Phil Greene (10 points on the night) late in the first half got the ball moving for the offensive unit.  They began forcing some turnovers and creating opportunities, but remained offensively stagnant.

"Early, I was disappointed with the sense of urgency," Lavin said afterwards.  "I thought we were beaten to the punch to the 50/50 balls."

St. John's looked like they were sleep walking in the early minutes because of the quick turnaround. If it weren't for Greene's offensive jolt, the game could have gotten out of hand.

After trailing by just 2 points at halftime, the Red Storm was blitzed out of the intermission.  Texas A&M extended its advantage to 10. 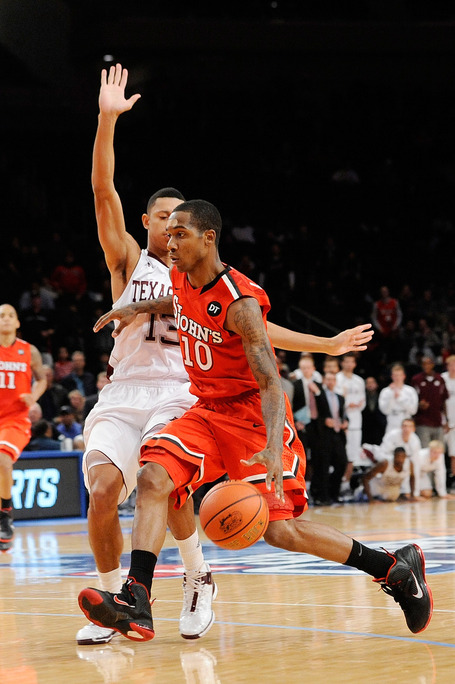 But, again, the Johnnies refused to quit.  St. John's certainly knows how to play from behind, as that's what they've had to do in four of its first five games this season.  After a stretch of deficits ranging between 4 and 8, the Red Storm finally took the lead late in the second half.

"Our players did an admirable job of scratching and clawing to get back and have a lead," Lavin remarked.

But the story of this game is twofold.  Texas A&M pulled down 15 offensive rebounds, allowing themselves for a number of second chance points.  Lavin's lack of depth also comes with a lack of size - something that was illuminated again Friday.

Secondly, St. John's was unable to exercise its advantage in how many free throws it attempted in comparison to the Aggies.  The Red Storm went to the line 38 times, while Texas A&M only took 3 from the charity stripe.  Only converting 22 (57.9%), the Johnnies gave away well more points than it would have needed to win.

After St. John's fell behind by 1 in the final seconds, Lindsey (photo at right by Patrick McDermott, Getty Images) took the ball the length of the floor and drew a foul with 2 seconds to go in the game.

With the crowd on the edge of its seat, and Texas A&M head coach Billy Kennedy's daughter releasing blood-curdling screams from the bench to disrupt the free throw shooters, Lindsey went to the line.

Both free throw attempts failed to fall as the Aggies escaped with the win.  The Red Storm's inexperience reared its ugly head.

"People can't blame Nuri.  I missed 2 free throws.  I feel like I lost the game," freshman guard D`Angelo Harrison mentioned.  "Nuri will have a breakout game coming soon and he will carry us the rest of the way."

Harrison (12 points, 2-7 3PT) joined Phil Greene and Maurice Harkless (10 points each) as the other Johnnies to reach double figures.

Ray Turner (16 points) led the Aggies with an interior presence for which St. John's simply didn't have an answer for.  He was the only member of this team to reach double figures.

For the young Red Storm, these two games in the 2K Sports Classic will be hard to swallow.  But it is encouraging to see that they are able to acquit themselves against worthy opponents on the national level.

"It's still a baptism by fire, so to speak," said Lavin.  "I thought it was valuable for this team to play two games against Top 20 teams that play a rugged Big East style."

The Johnnies will be back at it again on Tuesday night as they will host St. Francis (NY) at Carnesecca Arena at 9pm.