Despite losing both to Arizona (81-72) and Texas A&M (58-57) in the 2K Sports Classic benefiting Coaches vs. Cancer, the young Red Storm hung tough despite their inexperience and lack of depth.

There's obviously talent in the team. Phil Greene emerged with shots off the dribble and off the catch, and is developing his point guard game. Nurideen Lindsey's slashing ability was effective despite playing against two teams known for their defensive containment abilities, boding well for conference play. The defense had some nice stretches, mixing zone and man with Sir`Dominic Pointer playing both on the perimeter and deep in the paint. The team drew fouls and found ways to score, despite shooting 48.4% inside the arc (and much worse outside of it).

But God`gift Achiuwa was invisible, the team gave up a lot of three-pointers to Arizona. The lack of depth hurt in the first game, the free throw shooting hurt in the second game, and the lack of size/ rebounding hurt in both. A deeper look under the hood of St. John's two-game stretch against major conference opponents, below the fold.

Before we continue: you may want to look at an explanation of terms: stats + tempo-neutral terminology used on the Rumble if you're unfamiliar with concepts like Effective Field Goal percentage (eFG%).

Back to the analysis.

1) The staff has a good game plan. Teams that consistently cannot shoot from the perimeter like St. John's (now shooting under 26.5% from outside the arc) should be easy to game plan for defenses - pack it in, watch them clank shots. Still, St. John's could have won either of their games in Madison Square Garden. The offense manages to generate a ridiculous number of free throw attempts: the Red Storm had 68 shots from the line, and only 90 from the field - for every four shots, three free throws (75% free throw rate).

Coupled with an impressive ability to NOT foul - they allowed a 20% free throw rate to the Aggies and Wildcats - the Red Storm has chances to win many games. Texas A&M coach Billy Kennedy may complain about the free throw disparity, but his dribblers found it very hard to attack the seams, and the forwards for St. John's didn't give Ray Turner any extra attempts from the line. The Johnnies' restricted the Aggies fouling as well.

Even against Arizona, St. John's hit as many free throws as Arizona had attempts (21) - they're doing a good job drawing free throws. Note: Nuri Lindsey went 6 for 7 in that game.

2) Sure, the team can shoot... from about five feet in. From outside the arc, the Johnnies shot 30.8% in the two games. It was an actual improvement from their average coming in (23.8%), and they even took a slightly higher percentage of shots from the perimeter. From the free throw line, they shot 63.2%, which makes it tough to capitalize on their athleticism and game plan.

It wasn't just Nurideen Lindsey's free throws (8 of 16 vs A&M, with two misses with 2.3 seconds left in the game) that hurt the team. But as the player generating the most fouls (23 in the two games alone, a monstrous 143.8% free throw rate), he has a responsibility to shoot better than the 60.9% he shot in the Garden. Note: that's an improvement on Nuri's season numbers, which were 55.6% from the line coming in to the game. 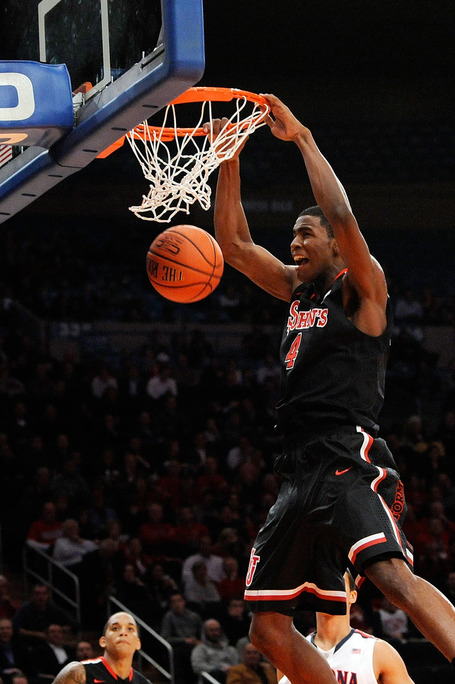 3) Maurice Harkless looked for his shot. Moe Harkless (photo at right, Patrick McDermott, Getty Images) continues to lead the team in field goal attempts, with 25 of the team's 90 tries from the field. He can get his shots off like a star player. When the jumper starts falling with more regularity, he'll be a Big East player of the year candidate. Note:  Harkless held his own in the paint, which is a bonus.

4) God`sgift Achiuwa struggles. The divinely named Gods`sgift came down to earth hard against Texas A&M and Arizona, averaging 3.5 points and 2.5 total rebounds while playing 29 minutes in each game. He missed 5 of his 8 free throws.

Surprisingly, foul trouble wasn't an issue at all for Gift... he struggled to generate offense against the height of the Wildcats and Aggies, often finding himself outside of the charge circle underneath the basket. He's far less effective when he needs to dribble himself into position, and leaves himself open for turnovers.

The rest of his game took a confidence dive as well. He wasn't a great per-minute rebounder, but his efforts in Madison Square Garden were near-nonexistent. He grabbed 4.2% of the available defensive rebounds, 6.9% of available offensive rebounds, numbers that would be poor for a guard, let alone the team's de facto center.

He was often beat in transition defense, and then found himself defending Ray Turner after Turner had gained deep post position (which wasn't just his fault, the team needed to get into defensive position more quickly overall). The only good thing he showed were quick hands, deflecting some passes and grabbing a trio of steals.

This isn't to bury Gift. Like the whole team, he has a lot to work on. And one wonders if his energy level wasn't there; his effort level was much higher in the first three games. Defenses can pack it in to bother gift; the team shoots badly enough that defenders were an arm length and a half away from the perimeter players for the Storm.

5) As we know, rebounding is a huge issue. Harkless and Gift have solid rebounding numbers... that come mainly from playing a lot of minutes. They're decent rebounders, not excellent, and the team around them isn't a great help. On the defensive end, St. John's gave up 31 offensive rebounds and grabbed 34. That 52.3% defensive rebounding rate means that other teams have many, many more chances to put up points.

Conclusions: There's a lot to improve on for the team, and outside shooting would help. If Malik Stith and Sir`Dom Pointer (both 2 of three on the season) can hit some outside shots when left open, if Harkless can hit some jump shots, the team will have more space to operate inside the arc. The rebounding will be a year-long issue that won't be resolved without a change in personnel (most likely).

But the team has some grit, and their athleticism helps them compete, despite having so much to learn as a team of mostly first-year players.