Share All sharing options for: Kevin Clark, Storming Into A Newer Pace

After three years as a walk-on for the St. John’s Red Storm Basketball Team, Kevin Clark is making a change of pace.

The former Red Storm practice player has moved on to Division II Pace University, where he continues his basketball career in the Eastern College Athletic Conference. The Rumble caught up with Clark to find out what he's up to, what the future holds, and his thoughts about the opportunity given to the walk-ons. 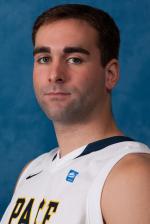 Life as a walk-on

The 6’2" guard from Scraton, Pennsylvania made a large jump deciding to come to New York City and start his collegiate career at St. John’s University.

"It was a drastic change to move to New York City. St. John’s was the perfect fit for me, though," said Clark. "It had all the benefits of a college experience I was looking for – social, cultural and geographic location."

Clark came to the school without a scholarship but with a desire to play basketball. And after his three years, Clark felt that his experience was worth every tuition dollar spent.

"The people I encountered throughout my four years were the people that I won’t be able to forget. Whether they were coaches, teammates, managers or kids on campus that became my friends," expressed Clark.

Clark went on to talk about his time as a walk-on.

"As a walk-on, it was an exciting experience. Everyday seemed like a new adventure," said Clark. "Being a walk-on isn’t the easiest thing in the world, but you have to walk in there with a positive attitude because everything isn’t about you."

St. John’s will need a lot of support from their walk-on student-athletes this year.

After losing three scholarship student-athletes due to academic ineligibility, the Red Storm coaching staff held walk-on tryouts where they selected five players who have been running with the team as a trial basis to figure out which would be added.

The two of the five that were added were announced before last Tuesday night's game versus C.W. Post, with others to be officially added to the roster in the near future (though they seem to be on the bench). Samuel Sealy-James and Gerard Rivers became the new Kevin Clarks of the St. John’s team.

Though not in the same situation as those two student-athletes, Clark still had some advice for them as they get ready for the season.

"I’d tell them to work as hard as they can. They have a very unique opportunity and with the staff that is there, they can only get better. You never know what could happen," advised Clark. "You could be put into a certain situation and you’re expected to be able to adapt to and do the right thing."

Clark felt that the walk-on student-athletes would benefit a great deal from Coach Steve Lavin and the rest of the staff.

Sealy-James and Rivers have a great opportunity to do something Clark and current scholarship player who last year was a walk-on as well, Jamal White got the chance to do. Compete at the Division 1 level.

"The great thing about the coaching staff is that your work will not go unnoticed. I think [Jamal] White and myself are perfect examples. Walk-ons that earned scholarships," said Clark. "Just keep fighting the good fight and it will work out."

The future at Pace

"It will work out" is something Clark can stand behind. His hard work and dedication to the program earned him a scholarship to Pace University, but Kevin thanked someone else besides his attributes for the new opportunity.

"I guess I would have to thank Coach [Mike] Dunlap for that," said Clark. "Coach [Jim] Harter came to a few of our practices last year and said he was looking for a shooter to add to his roster. Coach Dunlap introduced us and I had a year of eligibility left. I decided it was a good opportunity to continue my education, get my masters and be able to continue basketball."

Though given a great chance to play Division 2 basketball, Clark does have some things he needs to work on to get himself accustomed with Coach Harter's system at Pace.

"If I play defense and shoot the ball like I can, I feel that I could have an important role on the team," said Clark. "I feel as if I had maturity level that could benefit the team, and leadership is something I work on everyday to try and help even that much more."

Lynn University Men’s Basketball Assistant Coach Martin McCann said over the summer that Clark’s ability to shoot the ball should help Kevin make a mark on this Pace team.

"I worked Pace University's Camp with Kevin this summer, we played pick up," said Coach McCann. "He can really shoot the ball, definitely will get him some time for Pace this year."

Clark remains determined on his word of playing defense and shooting the ball to the best of his ability. In his final year of college basketball eligibility, Clark wants to go out on top. And he feels he has the teammates to do so.

"I think we can be a tough team to beat. My teammates are strong willed and work hard. There is a special bond with this group that developed quickly," expressed Clark. "A season goal is to try and win the NE-10 and advance to the NCAA’s and see what we can do from there."

The high expectations shows Clark's strong will to win and strong desire to achieve.

Who would have expected the small town kid who became a University's favorite walk-on to now be in a position to help another program win in his senior year?

"That experience was something I’ll never forget. My time at St. John’s was extremely special to me. The fans were incredibly encouraging and I will miss them a lot," said Clark. "As for being a role player, I’m excited to try and accomplish something new and begin a new season. It’s something I feel I am ready for."