D'Angelo Harrison is comfortable in his skin

Share All sharing options for: D'Angelo Harrison is comfortable in his skin

Intimidation isn't part of St. John's freshman D`Angelo Harrison's vocabulary.  He's all right if you feel a little intimidation, but don't count on him to join you.  The 6'3'' guard chose to come to New York all the way from Missouri City, Texas, and the big city doesn't scare him.

There's something special about this kid.  And no, it's not that he was born in Alaska.

Harrison is one of the prizes that make up Steve Lavin's highly touted class that came to Queens this summer.  While at Dulles High School - a public school - D'Angelo was a two-time all-state selection and averaged just over 31 points per game last year as a senior.  Known mainly as a long-range bomber in summer league ball and in Texas, Harrison can just as easily beat you off the dribble.  He has no problem doing either.

In fact, he doesn't have much problem doing pretty much anything.  On the surface, Harrison appears to be a free spirit.  On the court, he is a driven player with an agenda and an infectious confidence.  We caught up with #11 Friday at St. John's Media Day.  More below the fold.

When you introduce yourself to D'Angelo Harrison, he'll look you straight in the eye and give you his best business handshake.  Maybe if you're lucky enough, he may even apologize about fiddling with his socks seconds before.

Media Day provides a variety of news and communication outlets the opportunity to speak with players and coaches.  Harrison was fresh off an interview with Tony Luftman of newly-run STJ-TV.  That must have been different than talking to a few college-aged website scribes, right?

"No, not really,"  Harrison shrugged.  "No questions have been tough.  No questions are tough for me." 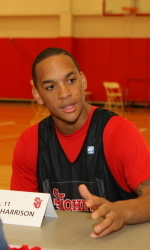 Harrison (photo at left courtesy of Red Storm Sports) epitomizes the term "swagger" when he plays basketball.  His forte is his outside jumper - and shooters see their best success when they are fearless.  Failure cannot be an option.

D'Angelo's most prominent quality is that unshakeable confidence. On or off the court, Harrison struts around as if he always knows exactly what his next move will be. Or as if the pending consequences can't bother him.

Harrison views his new environment, under the bright lights of New York City, as his chance to bring his career to unthinkable heights.  But not everything is effortless.

"Everything's different.  I'm not used to getting on the subway and going anywhere I want," the freshman said.  "But I really don't get why they want you to parallel park here.  I just can't do that."

The most surprising aspect of our fourteen minutes with him wasn't his effrontery. What made our time with Harrison so enjoyable was his visible comfort.  Unlike most athletes in the presence of media members, D'Angelo's intention wasn't to answer the inquiries and escape.  He gave us a face-to-face, eye-to-eye conversation.  It was like talking to a friend of ten years.

What drew the talented Texas product to the up-and-coming program in Queens, NY?  This may come as no shock, but Harrison was enamored by Steve Lavin's recruiting tactics.  Lavin and his team made him feel comfortable when he came for his visit.  They gave him freedom.  After all, Harrison's fine with sitting back and "chillin."  He's not a meetings guy anyway.

"Slimmy Slim!  We're talkin' about you over here, dog!"  Harrison hollered to another table where walk-on Samuel Sealy was sitting.  The Red Storm's diluted roster could force Lavin to utilize non-scholarship players more than originally planned.

"Yeah, Slim can contribute.  He'll need to work really hard and bulk up a bit."  It seems like Harrison's nickname for Sealy has stuck either way.

D'Angelo wasn't ready to join in on teammate Nurideen Lindsey's prediction of a National Championship.  He wanted to come off as more realistic.  Much more realistic.

"Nah, I didn't say National Championship," he clarified.  "I said Final Four, that's what I said.  If we work hard and stay together as a unit, we will shock a lot of people."

Don't confuse Harrison's boldness for brashness or cockiness.  It's much more of a comfort, and a deterministic attitude driven by a never-ending hunger to flourish.