St. John's continues college basketball's opening week with a 7 pm matchup against Bethlehem, PA's Lehigh Mountain Hawks.  After riding an explosive and turnover-free second half to a 74-59 victory over William & Mary, the Johnnies hope to apply a full 40 minutes of pressure defense, and give the home crowd something to cheer about.

The recovering Steve Lavin is closer to a return to coaching activities, coming by St. John's practice yesterday. For now, the Red Storm are learning from the staff, with Mike Dunlap as their head man. But fans and players alike are waiting for the ebullient personality and Lavin Lines of the coach to return.

Wednesday's game will be Lehigh's first of the 2011-12 season. They start their season with road trips to Queens and to Ames to play Iowa State, hoping to steal a win against one of two high-major teams trying to integrate new faces into their programs.

With a top mid-major player, a recent win over a Big East team (a 76-71 defeat of Rutgers in 2008), a freshman from the Bronx, and a recent trip to the NCAA Tournament (in 2009), the Mountain Hawks don't look to be intimidated by the running Red Storm.

Two years ago, the combination of McCollum, Coach Reed, and Gabe Knutson also took Lehigh to their highest win total and their first Patriot League conference championship.That's no conincidence. McCollum was thought to be a great get for Lehigh at the time. But no one predicted that he could be this kind of high-scoring player who could get his shot off against anyone, at anytime, in any venue.

Now McCollum is a candidate for the Lou Henson award for best mid-major player of the year. He's the nation's leading returning scorer at 21.8 points per game, and was the Hawks' leading rebounder with 7.8 boards overall per game.

Did you know? The Mountain Hawks used to be called the Engineers. Personally, I think that's a better nickname. 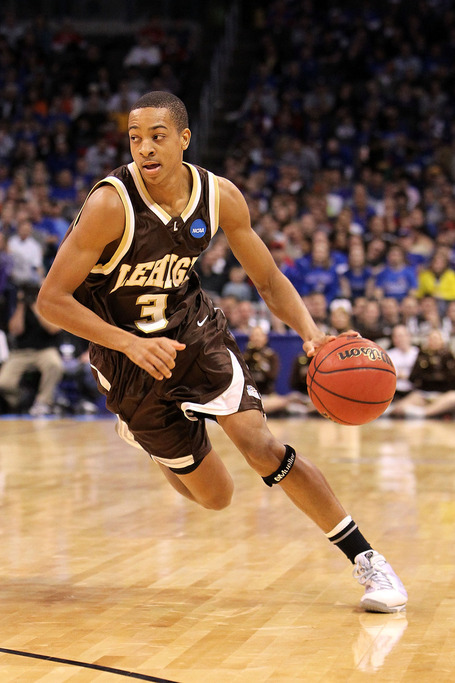 C.J. McCollum (photo: Getty Images, by Ronald Martinez) is the star. His scoring averages are phenomenal. He took 35.6% of Lehigh's shots last year. McCollum doesn't turn the ball over, and he gets his shot like Stephen Curry did for Davidson.

But scoring averages have to be tempered with notes about efficiency; the shots aren't all makes.

McCollum shot 43.5% from inside the arc (not great but not awful) and 31.5% from outside the arc (not very good). He was better in 2010, when Lehigh went to the NCAA Tournament. McCollum may have been asked to do more than he was capable of doing under constant defensive pressure, lacking a viable running mate on offense.

Still, this is a player who LED his team with 7.8 rebounds per game, grabbing 18.9% of the available defensive rebounds... he's obviously an athlete and a dynamo. He can steal the ball as well. And draw fouls. I bet he can fix cars, write rhymes, and change the weather, too. Did we mention he's 165 pounds dripping wet?

At guard, McCollum's support is sophomore point guard Mackey McKnight. McKnight was a decent passer and fairly careful with the ball. But his shooting was errant from inside (34.6% 2-pointers) and outside (31.7% on three-pointers) of the arc. Lehigh hopes he can develop into a productive, creative option. Also on the roster is sophomore Anthony D'Orazio - who had 17 points in their opener at Penn State (and didn't top 6 points after that) - and freshmen Corey Schaefer (a point guard) and sharpshooter Stefan Cvrkalj.

Up front, Gabe Knutson is McCollum's running mate. Knutson stays in the paint at 6'9, 215. He's efficient around the basket, hitting over 50% of his shots. His rebounding is pretty mediocre for his size, even allowing for McCollum's propensity to grab rebounds. But he drew more than 5 fouls per 40 minutes and can hit his free throws (74.4% from the line).

On the wings are Holden Greiner and Jordan Hamilton. The awesomely-named Greiner was a starter as a sophomore last season. Coach Dr. Reed says the 6'7 wing "has guard skills in a larger frame". It should be noted that those guard skills shot 30% from outside the arc but 54.7% inside, so Greiner may just be a mobile forward. The player who our beat writer Tom Housenick told us is the "most improved player" is also the team's second best rebounder, adjusted for time on the court.

Jordan Hamilton also shot poorly outside the arc (31.8%) but well inside (58.6%). He profiles as a jump shooter - he drew few fouls, wasn't a factor on the glass, though he did block some shots.

Hawks Strength: Finding ways to score. The Mountain Hawks didn't shoot particularly well. Part of that should be attributed to the sheer volume of shots C.J. McCollum took (537 shots, and an additional 233 from the free throw line). But the team was excellent at getting to the free throw line as a percentage of their shots taken (a ratio of 46.4, 21st in the country) and didn't turn the ball over (on 18% of their possessions, 54th nationally). They may miss from the field, but they make sure to get all the chances they can to score.

Hawks Strength: CJ McCollum. He takes up possessions like nearly no one else does. He can shoot from anywhere, he's quick, and his teammates look for him to carry the Hawks.

Hawks Weakness: Secondary stars. McCollum was an incredible freshman when playing with a good rebounder and a high volume offensive running mate. There need to be players to take the heat off of McCollum. his high rebounding average isn't just because of his skill, it's because Lehigh needed him to do everything.

Hawks Weakness: Competitive level. Lehigh hasn't played a particularly challenging schedule; so the players' numbers should be taken with a grain of salt. McCollum can play his game, but the other players are limited - as one might expect from a Patriot League squad.

St. John's is 1-0 team needs to force turnovers and run; it remains to be seen if the Johnnies can keep that defensive effectiveness high. St. John's hasn't shot the ball well in the early going, but can find the bucket in transition.

The scoring isn't the big worry, though the Red Storm needs to be more efficient and less predictable.

But the fact that the defense leaves open three-point shooters while the defense swarms and traps around the ball has to be worrisome. Lehigh doesn't return a sharpshooter, but D'Orazio, McCollum, and others have that potential to strafe the Red Storm from buzzer to buzzer. What will the defense look like against a sneaky, athletic guard who can find shots all over the floor?

Force turnovers. The Red Storm have to start their offense with pressure defense, with D`Angelo Harrison and Sir`Dominic Pointer forcing bad passes, putting on pressure, and running with the opponents' miscues.

Score in transition. The team's jump shooting has been rough to watch. Still, their ability to race the court and get to the bucket has been astounding. Expect more attempts to get shots at, next to, or over the rim.

Disrupt the passing. In the halfcourt, Malik Stith, Nurideen Lindsey, and D`Angelo Harrison have to be pests to opponents trying to pass the ball around the perimeter, disrupting the other teams' timing.

Rebound the misses. With only God`sgift and Maurice Harkless as rebounders, the Johnnies have to fight to stay credible on the glass on either end. Giving up second chance points to a scrappy team is a great way to give up points...

No foul trouble. ... and fouls. With only 7 scholarship players, low foul, low turnover games are key for St. John's

St. John's vs Lehigh Prediction: St. John's is just too much for Lehigh, but CJ McCollum, Gabe Knutson, and inability of the young Red Storm to shoot free throws will make it interesting, leading to a 76-69 St. John's win.