Coming into the Kentucky/ St. John's matchup, fans would much rather be talking about Steve Lavin's history over #1 ranked teams, where he was 4-4 at UCLA. Or Lavin's victories over ranked teams last season. Or how this is a matchup of two blue bloods, both in the top ten for all-time victories in the NCAA. Or how the matchup pits two stellar recruiting classes against each other.

The two teams are still first and seventh in all-time wins. But Steve Lavin will watch the game from home, as he regains his strength from prostate cancer surgery. And the Red Storm recruiting class is missing a trio of forwards who could have joined with the players in the fold to become a pressing, fast-breaking ten-man hardwood assault team.

Still, the young Johnnies are hungry for respect. St. John's wants that cachet that the Wildcats have - the media love, the #1 ranking, the expectation of winning every single game.

It may be early to snatch that #1 spot. On paper, a decimated team missing its head man seems like a poor matchup for a top team at home that is still improving. But the Wildcats aren't perfect. Will Kentucky be caught looking ahead to an illustrious matchup with the former #1 team, North Carolina, on Saturday.

Can St. John's take their respect in their portion of the Big East/ SEC challenge tomorrow night?

Read below the fold and find out.

See also: Johnnies need Harkless, Harrison to shine | St. John's vs Kentucky: 5 questions on Kentucky with A Sea of Blue | Steve Lavin: the healing process will determine return to sidelines

"We are just really long and it makes it difficult for teams to get it (the ball) over when you got guys like Mike (Kidd-Gilchrist) guarding you and me coming to trap." - Terrence Jones, postgame - Portland vs Kentucky

Kentucky is long, athletic, and young. They've beaten the spirit out of their opponents, winning by an average of 30 points. Against the best two teams they have faced - Kansas at Madison Square Garden and Old Dominion in Connecticut - they've only won by ten. Is that a factor of playing on the road? Or are the Wildcats possibly... vulnerable?

The Red Storm will come to play hard. The Johnnies have active hands and the kind of quickness that the Wildcats have only seen with Kansas... and St. John's may be quicker and faster, in terms of pure athleticism.

At their best, this is a Kentucky team that has realistic Final Four aspirations, despite their youth. Their recruiting class includes a trio of top-10 recruits - all three are top-5 in certain publications. So far, none of them have disappointed. The frosh have adjusted to picking up on Coach John Calipari's the dribble drive offense and his defensive demands.

The Wildcats try to use their quickness off of the dribble to break down opponents on offense, kicking the ball out to perimeter shooters/ drivers. They're often effective at it, but have gotten off to slow-ish starts this season. The athleticism covers up for the slow starts; once they get in transition, they are fast, deadly finishers.

Did you know? Phil Greene and Anthony Davis played AAU ball together in Chicago for Meanstreets. 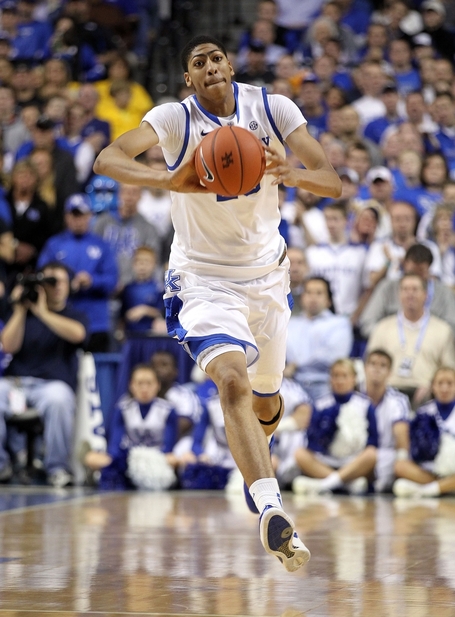 Kentucky Strength: Interior defense. Anthony Davis (photo: Andy Lyons, Getty Images) has been favorably compared with former U Mass center Marcus Camby, that lengthy, agile difference-maker that helped the Minutemen to the Final Four in the mid-90s. Davis blocks 4.3 shots per game, doesn't pick up a lot of fouls, and knows how to use his body. He's shorter than Camby, but just as effective.

He's not the only shot-alterer - Michael Kidd-Gilchrist and sophomore Terrence Jones combine to block 3.5 more shots per game. And Kyle Wiltjer and Eloy Vargas are no defensive slouches.

With senior Darius Miller's defense, they combine to form an impenetrable web of defense that has allowed opponents to shoot 32.7% inside the arc, all without sending opponents to the line. There are no cheap points to be had against Kentucky.

Kentucky Strength: Balanced offense. All of the Wildcats are talented scorers. Five of the eight in the rotation shoot around 19% of the time when they are on the floor. New Yorker Doron Lamb (21.3% of the shots) and Terrence Jones (22.3%) barely crack 20% of the team's shots when they're on the floor.

There's no one player to key in on. Anthony Davis plays offense mostly in the paint, and Lamb is as close as they get to a three-point gunner. As gunners go, however, Lamb's shot total (26) from outside the arc isn't distant from teammates like Darius Miller (16 tries from beyond the arc), Kyle Wiltjer (13 attempts), and Marquis Teague and Kidd-Gilchrist (12 apiece).

Kentucky Weakness: Ballhandling. With all weaknesses for a 6-0, #1 ranked team, the "weak" is relative. The Wildcats certainly finish their possessions with shots most of the time, only turning the ball over18.4% of their possessions. And John Calipari may choose to allow his teams some freedom to be creative, even at the risk of turnovers.

Still, having a point guard in Marquis Teague who turns the ball over on 28.5% of his possessions is slightly alarming. His last game was turnover-free. And he is a dynamic baller. Still, for a team who plays the shooting guard Lamb as the backup point guard, one would like to see a little more consistency - and fewer errant passes - from Teague and the rest of the squad.

Kentucky Weakness: Physicality? If there's one worry broadcasters and fans alike have murmured about, it's the "skilled" nature of the Wildcats. Here, "skilled" is a euphemism for "less physical than some feel is appropriate."

Coach Calipari has noted his team's tendencies to settle for jump shots instead of initiating contact. "It’s difficult when guys are sagging so deep," sophomore forward Terrence Jones said after the Portland game. "Coach told us that he doesn’t want us to settle so much so we are going to keep going to the hole." The lack of physicality shows up on defense occasionally as well.

It may not be a big weakness, but it is of interest.

The Five Points: Keys to the Game 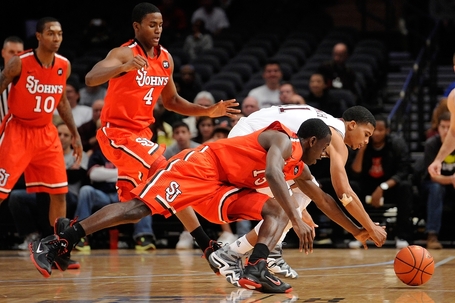 Transition points. The Red Storm won't win without some contribution from their transition game. Turnovers will help generate easy shots for the Johnnies, who don't have reliable range on their shots yet. Turnovers will also keep the Wildcats from putting up shots and getting second chance points on the Red Storm, who have well-known rebounding issues.

Whether it's off of turnovers or off of missed shots, Nurideen Lindsey has to be on the attack, getting to the rim and drawing fouls. God`sgift Achiuwa, if he can beat his man in transition and make himself available to receive passes, will be a factor as well.

Big-time scoring. It's very likely that one player will have the chance to be a hero scorer in Kentucky if the Red Storm pull out a win. The Cats' defense on the perimeter is good, but less fearsome from the outside. Will it be D`Angelo Harrison getting hot from the outside? Will it be Phil Greene? Moe Harkless? Harkless and Harrison's scoring will be needed for an upset.

Of course, if Nurideen Lindsey has 4+ turnovers, especially in the flow of the game, the Red Storm will find themselves in trouble without their dynamic playmaker on the floor... and fouling the 'Cats going the other way.

Keep the Cats out of the middle. Kentucky is dangerous when they drive into the middle; that forces other defenders to help off of their man, leaving open the opportunity for easy assisted buckets. Good defense against them means keeping the ball outside of the arc, whether in man-to-man or zone defense.

Coronation jitters. For St. John's to win, a lot has to go right - an off shooting night for the Wildcats from the perimeter or wild Wildcat turnovers, coupled with efficient scoring from D`Angelo Harrison, Maurice Harkless, and the rest of the Johnnies. Will Kentucky come out cocky with their shiny new ranking? If so, St. John's can catch them slipping, and force them into turnovers, weak rebounding attempts, and a chaotic game.

Prediction: Kentucky has a lot of weapons, and the Red Storm aren't at the point where they are springing upsets on the nation's best. If the Red Storm are lucky, this can be a springboard to big wins. More likely, though, this game will be a learning experience. Kentucky wins, 81-70.