An amazing senior campaign earned 6 St. John's Red Storm players professional basketball contracts in the states and overseas. All 6 players were recruited by former head coach, Norm Roberts, who had a lot to do with the reshaping of the program and bringing it once again to its current state.

After 3 long, grueling and tough seasons, these Red Storm student-athletes found their way to success as seniors under coach Steve Lavin.

D.J. Kennedy, Paris Horne, Justin Burrell and Sean Evans were recruited to be a part of the St. John's program for four years, along with Malik Boothe and Dele Coker, starting in the 2007-08 season. In 2009, Roberts brought in two JUCO transfers, Dwight Hardy and Justin Brownlee, who turned out to be important assets.

But they didn't truly shine until their senior year, when the Red Storm finished the season 21-12 with a 12-6 conference record, defeating 7 ranked teams which catapulted them into the AP poll at #18 in the nation. They would recieve an NCAA berth as well; after an injury to Kennedy, they lost to Gonzaga in the 1st round. The foundation of the program graduated, leaving only returning guard Malik Stith behind.

Most of the graduated players are tasting success home and out of the country. How are the players performing outside of college and in the pros?

In their 2nd year as a unit, the team would finish the season 16-18 picking up one more win then the previous year in Big East play, 6-12. Their 3rd year saw a lot more progress. Roberts brought in two JUCO transfers, Dwight Hardy and Justin Brownlee, who turned out to be important assets to a solid season.

It would be Roberts final year with the team, but he went out on a high note with the Red Storm finishing 17-16, 6-12 once again in Big East play, and clinching an NIT berth.

Anthony Mason Jr. graduated that year, and Norm Roberts would be released from his coaching duties after that season. Steve Lavin was hired to see what he could do with these 6 guys, and for how he could shape the future.

As mentioned above, magic happened. The fans came back to see the senior-led team knock off ranked opponents at home and frustrate the Big East, finishing in the top 5 of the league. Those players have started earning money abroad and at home.

Horne was one of the best defensive perimeter stoppers in the history of St. John's for four years with the program. While at St. John's, Horne averaged 9 points on 43.4% shooting and is tied for 2nd on St. John's All-Time three-pointers made list with Felipe Lopez at 148.

With Göttingen, Paris is fourth on the team in scoring at 11.8 points per game while shooting close to 40% from the field and 81% from the line.

His team, however, is in last place of the Bundesliga standings at a mere 1 win and 10 losses.

In mid-November, Horne's German squad looked to add depth to their roster and looked to none other than Horne's former teammate, Sean Evans. Evans, another four year player at St. John's, averaged 6 points and 5 rebounds per game in his career with the University, shooting close to 50% from the field.

During his first stop with Duesseldorf , Evans played 5 games averaging 6 points and 2 rebounds per game before leaving and joining Göttingen. In his first 3-games with Göttingen, Evans is averaging 12 points and 8 rebounds.

A highlight video (yes, that is a lot of slow motion play): 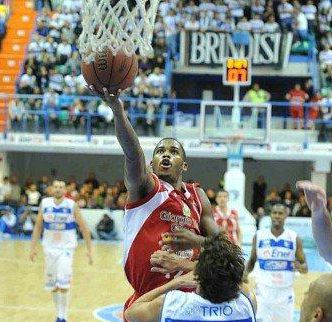 Over in Italy, Hardy is continuing how he left St. John's, scorching the nets. Though Hardy only played two seasons with St. John's comming in as a JUCO transfer, Dwight left the fans with great memories. Hardy averaged 18 points per contest last year (14 per game during his career) shooting 45% from the field and 35% from 3-point range.

On top of his brilliant scoring, Hardy moved over to starting point guard in Lavin's offense and prospered, helping the team to 7 victories over ranked opponents including game winner versus Pittsburgh.

Now a member of his Italian club who are 7-3 in the standings (good for 3rd place), Hardy is averaging 21 points on 57% shooting in Lega2. That average is 2nd best in the league behind former Georgetown standout, Austin Freeman. Hardy's career high in Italy is 44 points.

Over in Japan, big man and 2010-11 Big East 6th Man of the Year Justin Burrell plays for Yokohama. In his four years at St. John's, Burrell suffered through injuries that hurt his playing time. His best season was his freshman year when he averaged 11 points and 6 rebounds. In his career, Burrell averaged 8 points and 5 rebounds.

Now healthy and in Japan, Burrell is playing like a force, averaging 18 points on 51.8% shooting while also grabbing 10 boards per game. His team has been up and down this season with a record of 5-8 in their first 13 games.

Like Hardy, Justin Brownlee only spent two seasons with St. John's coming over as a JUCO transfer.

Averaging 12 points on 49% shooting his senior year, Brownlee was another pivotal player for the Red Storm last year.

Brownlee signed a contract to play in Mexico, but left the team after 10 games due to personal reasons. In his 10 games however, Brownlee did score 13 points with 6 boards and a steal per game.

Brownlee is now with the Maine Red Claws (the D-League affiliate for the Bobcats, Celtics, and 76ers) averaging 12 points and 7.2 rebounds. He has started 3 games.

D.J. Kennedy and Anthony Mason Jr. (who graduated a year before, and gets an honorable mention) also join Brownlee in the D-League.

Kennedy is listed on the Erie Bayhawks (Knicks) but has yet to play a game because he is still recovering from his ACL injury he suffered during the Big East Tournament. He was recently activated for duty with the Bay Hawks.

Mason Jr. is currently with the Sioux Falls Skyforce (Heat, Magic, Wolves) playing 38 minutes per game and averaging 15.3 points, 5 rebounds, and 2 assists as a starting guard for the team.

From Germany to Italy, across the sea to Japan and back in the States, these former St. John's student-athletes are making their hardwood dreams come true, one bucket at a time.