I couldn't break my commitment. When things get tough, you don't just give up. - Amir Garrett, on staying committed to St. John's

The 97-day uphill climb is over.

Amir Garrett became officially eligible on Tuesday night. By Wednesday night, he was draped in a white and red warm-up suit, just one of the guys. After missing 10 games, Garrett finally joined his teammates on the Carnesecca Arena floor and played in his first collegiate contest. In 15 minutes, he scored 3 points and grabbed 2 rebounds.

No, Amir Garrett didn't arrive to Queens wrapped in tissue paper or with a bow on his head, but he did come equipped with athleticism and a pair of shoes. And, for St. John's (6-5), it couldn't have come at a better time.

Garrett was deemed academically ineligible on September 15th, prohibiting him from participating in all St. John's Red Storm team activities for the fall semester. Along with Norvel Pelle and JaKarr Sampson, his Johnnies debut was put on hold.

The 6'7'' forward has been on Red Storm fans' wish list for three months and, selfishly, they just had to get a sneak peak just four days before Santa would have delivered him anyway.

The crowd roar at the 13:22 mark of the second half was as if the video board showed Lou Carnesecca or Chris Mullin. This kind of love couldn't be for just anybody.

The ovation wasn't for any past St. John's greats or current legends. It was for Amir Garrett, checking into his first game for St. John's after three months of virtual banishment. What had been a tremendous disappointment had become a great joy. 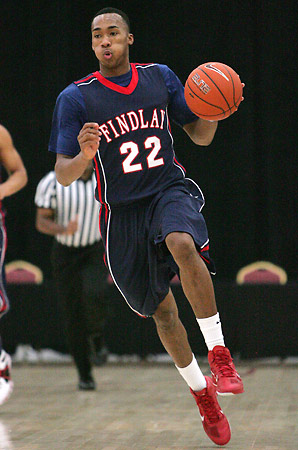 As Garrett replaced Sir`Dominic Pointer on the floor, it was as if a weight was lifted. He was no longer exclusively associated with Pelle and Sampson as one of the 'ineligibles.' He was no longer that kid who didn't qualify. He was no longer just a name or a mix tape. (Photo: Amir Garrett, SI.com)

He was just one of the five.

"[Amir] showed loyalty to this program," associate head coach Mike Dunlap said after Wednesday's game. "We wanted to take advantage of the opportunity to show him our appreciation for that loyalty."

Somehow, that is what this had become. No longer was Garrett's academic recovery process a correction of a prior mistake.

The fact that Garrett didn't bolt from the program after learning that he would miss the first semester was actually an impressive act; Garrett did everything right. Hours after news broke that he was one of three Steve Lavin recruits to fail qualification, Amir and his father had both reiterated that he would work diligently toward gaining eligibility. There was never a doubt that he wanted to be a Johnny regardless.

"It's a pride thing. My mother always told me to never quit," Garrett said. "I made a commitment to Coach Lavin and the staff. I couldn't break my commitment. When things get tough, you don't just give up."

It's fitting that he would use that life analogy. What Garrett did is just another example of the simplest life lesson. When you mess up, you own up to your faults and face the consequences. The same goes for stealing a toy at the playground or testing positive for performance-enhancing drugs.

Does he look better because he was the only of the three ineligible players to stick to an agreement? Yeah, maybe. But that doesn't take away from the value in doing what is right.

From a more technical perspective, Garrett's holiday arrival does a little more than just culminate a three-month individual grind. He becomes the 7th scholarship athlete who will see legitimate minutes for the Johnnies going forward.

As he virtually replaces Nurideen Lindsey, who transferred and left the team earlier this month, Garrett gives the Red Storm at least some depth. Being a much different player than Lindsey, the product out of Findlay Prep gives St. John's a different look than it had as recently as two weeks ago. All of the sudden, they're longer.

As opposed to the first 8 games, St. John's now has the option of producing a lineup of competitive height. Though rebounding will remain a liability, Garrett gives the squad a more solidified interior presence.

"When he came into practice today, everyone seemed to get lifted," freshman guard D'Angelo Harrison mentioned. "He's another body. He's another player. He is versatile and will be able to help us."

You can say that again, D'Angelo. Just that Garrett is a human being of any substance helps the thin St. John's team. Four Johnnies played the full 40 minutes in Saturday's win over Fordham. At that rate, they'd be jello by Valentine's Day.

Naturally, it will take time for the newcomer to fit in and gel with his teammates. There were times Wednesday when it was evident that Garrett didn't quite know where to go or what to do on both ends of the floor. But he hasn't even practiced yet. We're not that cruel.

"To be honest, I don't know anything," he joked at the post-game press conference. Truthfully, he may not be kidding. He was even surprised about how much he played.

"They said they'd throw me into the fire," he said. "But they threw me completely in."