Steve Lavin hasn't been able to be on the court coaching. But he has been able to do what he's best known for - scouting talent. 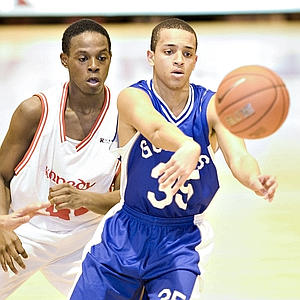 In Bronx guard Carlos Galan (photo by Dennis Gostev, nypost.com), Lavin seems to feel he's found a guard of the future. The slender 6'1" combo guard plays at Gompers High School in the Bronx, and is a junior.

Though he ran with the Long Island Lightning, he didn't play AAU ball last summer, preferring to play in tournaments with his high school team and develop his skills.

The details on Lavin's offer to Galan per Zach Braziller of the New York Post, who covers the New York City prep scene:

The Johnnies have been up to The Bronx school twice, have offered him a scholarship and head coach Steve Lavin attended the Panthers’ 69-65 victory over Manhattan Sports Academy at the Kingdome Classic on Wednesday.

"It was very significant he would come to The Bronx to see my kid," [Gompers coach Ned Jackson] said of Lavin, who made the trek with assistant Rico Hines. "I thanked him for coming."

Last season, per his MaxPreps page (so take with a slight grain of efficiency salt, as not all games show how many attempts he had). Carlos Galan was held under 10 points three times. He averaged 23.4 points per game last season.

Galan is from the Dominican Republic (and is still learning English). He came to New York in the seventh grade, moving near his childhood friend from Santo Domingo, Yohan Almonte, as profiled by the Daily News.

Having repeated the seventh grade after he arrived in the US, Galan will be too old for PSAL play next year. He will move on to a prep school for the 2012-13 season.

St. John's may not be the only team that offers. Iowa State has been intrigued by the scoring Galan as well. Galan's scoring talent will likely attract other high-major suitors. Will Galan follow in the footsteps of Moe Harkless and accept the offer to play in his adopted hometown?

St. John's only has Darrick Wood as a verbal commit for the 2012 recruiting class. With seven scholarship players currently on the roster - and two set to graduate in 2013 - there are scholarship slots for many players on the Red Storm.