The Red Storm stand at 4-4 on the season after the first month, and the reality of a building season with freshmen is setting in.

The team is growing, the players show a lot of potential, but the Red Storm couldn't pull out a defining win against the three ranked teams they played.

But Detroit has it worse. The Detroit Titans came into the season with great hopes - a possible Horizon League championship, national honors for star guard Ray McCallum, playing for his father, and maybe an NCAA run with their height and talent. But the squad is battered, thin, and holds a 3-6 record that's weaker than it looks - two wins are over non-Division 1 opponents.

Suspensions and injuries have left the Titans vulnerable. But they are home on the night that Detroit honors former coach (and probably the most famous college hoops commentator) Dick Vitale by naming the court at Calihan after him. It could be an emotional night, and a chance for the Titans to show up the Red Storm on television. 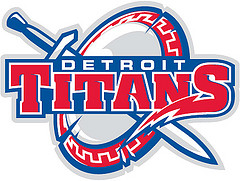 The Detroit Titans have struggled badly.

Talented Indiana transfer Eli Holman came to Detroit after Ray McCallum Sr, a former assistant under Kelvin Sampson with the Hoosiers, was hired as head coach of Detroit.

Holman added a level of offensive efficiency and defensive intimidation that made the sometimes turnover-prone, sometimes chaotic Titans into a team that could battle with the Horizon League's best. With a roster that played no seniors last season, the Titans were expected to contend for the league title.

Eli Holman, known to have a hot head, got into a fight at a Phi Kappa Theta fraternity party. That fight left some busted teeth for the victim and left Holman suspended indefinitely.

6'9 forward Nick Minnerath, one of the team's most effective shooters, injured his right MCL and ACL and is out for the season.

Guard Chris Blake is out for a violation of team rules until December. Two other scholarship forwards (including Juwan Howard's son, Juwan Jr.) are ineligible this semester.

The Titans are down to eight scholarship players - much like St. John's.

The Titans have managed only one win against a Division 1 opponent - an overtime win over former St. John's guard TyShwan Edmondson and his Austin Peay Governors. The "Peay" are 0-9 on the season.

The Titans have been statistically poor across the board. They don't rebound well on defense at all, they turn the ball over a bunch (which they did last year), they struggle to shoot from outside, they allow healthy shooting all over the court. They have a little height in shot blocker LaMarcus Lowe; Doug Anderson and EVan Bruisma are also on the roster.

But it's not enough, especially in the rebounding categories. One punch may have derailed the Titans' season.

Did you know? The last time these two teams played, Felipe Lopez and Zendon Hamilton were upset in the first round of the NCAA Tournament by the Titans. It was 1998 in the United Center; Detroit won, 66-64. 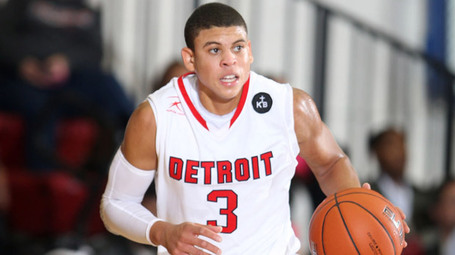 Detroit Strength: Ray McCallum. The coach's son spurned offers from the likes of UCLA to come and play for his father in the Horizon League. He's had a chance to represent the US in the World University Games. He's on the Wooden Award watch list. He's the Horizon League's preseason player of the year.

And all of the accolades are with good reason. McCallum is a smooth point guard with the ability to get his own shot off of the drive or to pull up for the deep shot. He's got good size, and can draw fouls with his crafty game.

Detroit Weakness: Lack of Diversity. Right now, the scoring options are Ray McCallum and Chase Simon. Neither has been effective enough to carry a team without help. Simon is the same shot jacker he's always been, with an ability to put up points when he gets hot from outside.

But McCallum's game has taken a step back. He assists on fewer of his teammates' makes, and he draws fewer fouls than he did last year.

Detroit Weakness: Three-point defense. The one bonus from the the first two Horizon League games - both losses - is that the Titans are defending the three-point line better than they had been all year, allowing 30% shooting (the overall rate was over 39%). It could be a blip - teams really strafed the Titans defense, which often does not apply pressure. Are they pressuring more now, with no erasers in the paint?

The Five Points/ Keys to the Game

Fast start. St. John's needs to get buckets early. This means the team has to play sharp defense from the beginning, and find ways to attack the paint with Nurideen Lindsey and God`sgift Achiuwa. Jump shots may be nice, and open, but the Red Storm are an inside-out team first, drawing fouls and putting pressure on the opposing defense.

Identify McCallum, Simon, and Calliste. Chase Simon is #1. Ray McCallum is #3. Jason Calliste is #10. Those are the three point shooters. Calliste, in particular, hasn't been able to squeeze off many shots. But wide open, against the matchup zone, he could just get his confidence.

Get the Offense Running. Detroit has slowed down their attack since Minnerath was injured. St. John's wants a running game, even if the Titans are the right kind of team for the Johnnies to work on their half court offense with. St. John's needs to push the thin Titans and pressure them from end to end to force miscues.

Establish the Paint. God`sgift, Sir`Dominic Pointer, and Maurice Harkless have to establish themselves as dedicated to rebounding on both ends from the beginning of the floor.

Turnovers. After the Kentucky loss, Mike Dunlap told reporters "the disappointing part [of the Kentucky game] were the turnovers, 19; when you go on the road you have to take better care of the ball." On offense, the Storm's game involves minimizing turnovers, creating chances to score. The team needs steady play from Lindsey, Phil Greene, and Malik Stith.

Prediction: Detroit could get their legs under them and give the Red Storm a test. But the Johnnies have weapons, and the Titan weapons watch from the stands. St. John's wins, 73-62.