The Red Storm have a second straight road game, this time against the Horizon League's Detroit Titans on the night where the court at Calihan Hall will be dedicated to Dick Vitale, and the Titans will wear their throwback jerseys.

The game itself is an intriguing one - a chance for the Red Storm to wipe the taste of the 81-59 loss at Rupp Arena to the #1 ranked Kentucky Wildcats out of their mouths. The game saw positives - a better zone defense, an aggressive God`sgift Achiuwa and a solid Phil Greene. But on the other side, D`Angelo Harrison couldn't hit his shots and Nurideen Lindsey fouled out without his usual impact.

It may have just been the imposing Anthony Davis/ Terrence Jones shot-altering tandem. We'll find out whether it's their length... or something else that led to passivity.

The Detroit Titans come in with a lack of depth, especially in the post. The Red Storm's three-point defense will need to be active in this game against Jason Calliste (#10), Chase Simon (#1), and Ray McCallum (#3). They'll be rocking star-covered throwbacks: 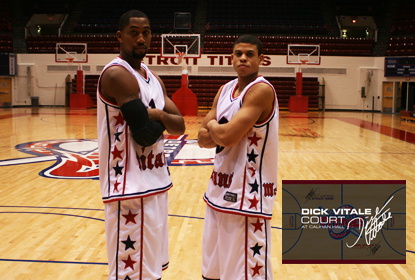 What are you hoping to see from the Johnnies tonight?