Why would Nurideen Lindsey transfer from St. John's?

Share All sharing options for: Why would Nurideen Lindsey transfer from St. John's?

A thin roster just got a whole lot thinner.

It was reported by New York Daily News' Roger Rubin and officially announced by the University on Thursday afternoon that St. John's sophomore guard Nurideen Lindsey plans to leave the team and transfer out of the school. Lindsey's departure, effective at the end of the current semester, comes as a surprise to the Red Storm supporters.

Lindsey, the JUCO transfer from Philadelphia, averaged 11.8 points, 4.9 rebounds, and 2.9 assists per game in the nine contests in which he competed for the Johnnies.

Steve Lavin's heralded yet risky 2011 recruiting class has taken yet another hit that could set back the program from the dreams of immediate national success. The coach, who continues to miss time while recovering from prostate cancer surgery, will have much work to do upon full return to recapture positivity.

Why would Lindsey choose to leave the program at this point of the season before the team even played ten games?

Nurideen Lindsey came to the St. John's campus in the summer as a JUCO transfer from Redlands Community College (OK) with three years of Division I eligibility. The Philly native had taken his life to the rural Midwest to develop his game after rekindling his love for the sport.

Lindsey's story of inspiration and courage has been well-documented by now. The tragic deaths of his brother and best friend led to the dwindling of his focus on basketball. For a significant period, Nuri never even picked up a ball or attempted a shot.

He came to St. John's to showcase his incredible gifts and fulfill a dream that had been put on hold. He had everything he could have ever wanted, or so it seemed. But Lindsey's stay at a Big East program in the biggest city in the world is over.

There are a few possible reasons why Lindsey ultimately decided to depart from Queens - some probable, some thought-provoking, and others a bit reaching. The exact causes for his transfer haven't been disclosed - and may never be - so we'll speculate.

A Clash With Dunlap, Staff, and Teammates?

Rumblings have emerged that Lindsey and/or his supporters could have been unhappy with how his game has been treated. Lavin's absence has given associate head coach Mike Dunlap a great amount of responsibility, including full reins of game coaching duties. As Nuri's struggles have been spotlighted, his playing time has decreased. In the Red Storm's two most recent losses, Lindsey played 41 minutes combined.

Lindsey is viewed by many as a prospect with a professional future in basketball. If his struggles were going to lead to decreased playing time, his stock could have dropped. The reality is that a often deciding factor in athletes' choice of the programs they commit to is how well the coaching staff can prepare them for the next level. Could Nuri have lost faith in the St. John's staff this early?

The team's on-court chemistry has seemed to take a hit in recent games as well. There have been instances when a wide-open Lindsey was seen, but never passed to. Visible frustration has ensued, but has gone generally unnoticed to this point.

No, we don't have access to the locker room. We don't know what is said or, maybe more effectively, what isn't said. While we have been analyzing the Johnnies' hardships and growing pains within the 40 minutes, there could have been something developing behind the scenes that culminated in a Lindsey unbinding that couldn't be reversed.

Lindsey is a quiet fellow who seems to disguise his inner emotions in public. Internal clashing could have been a deciding factor in the decision that ended his St. John's tenure. 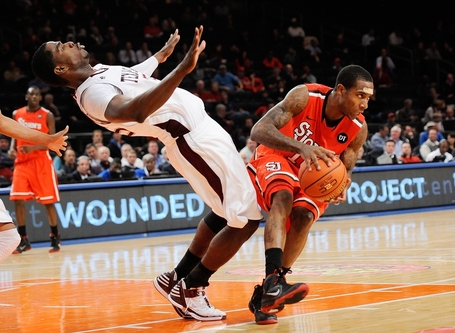 As detailed in the earlier post on Lindsey's transfer, his stint with the Red Storm can be categorized in two installments - pre-A&M and post-A&M. In the consolation game against the Aggies on November 18th, Lindsey missed two free throws in the final seconds - one to tie, two to win. In four games since those moments, he has averaged 6.8 points per game. It was 15.8 before.

Lindsey's aggression seemed to decline in the losses to Northeastern, Kentucky, and Detroit. The insatiable guard that we saw lead comebacks over William & Mary and Lehigh wasn't the same. The unstoppable lane attacker from the Arizona close call was nowhere to be found. His game revolves around aggression and, without it, his game took a hit.

In nine games, Nurideen never found his shooting stride. He never made a three-point shot in 15 attempts and converted on only a handful of mid-range jumpers. His shooting struggles were affecting his confidence - a deterioration that was reflected in the Red Storm's half-court attack.

Let's face it. Since the semester began, the St. John's program has endured more negative news than positive. First it was the announcement of ineligibility. Then it was de-commitments from recruits JaKarr Sampson, Norvel Pelle, and Ricardo Gathers. Then Lavin's return to the sidelines was cut short.

Could it be that Lindsey was growing uncomfortable with the direction of the program?

Though it would seem premature and impatient, it's possible that Lindsey could no longer envision a future of success at St. John's. Lavin's health and extended absence from the program cannot be encouraging for a developing player like Nuri. There has been a lot of disheartening news surrounding the program in just three months. Sure, none of it is anywhere near the severity that Lindsey experienced before coming to Lavin's team. But maybe he'd had it with the negativity.

F.O.E. (Family Over Everything)

In just 21 years, Lindsey has endured a life of distress and tribulation. Fortunately not speaking from experience, I'm aware that family tragedies can be the most emotionally draining reality in life. To recover from unexpected loss, it could take years - if possible at all. There is nothing more important in such times than time spent with those you're close with.

On top of it all, it is said that Lindsey's mother has experienced bouts with health issues in recent times. Nuri must feel like the distance between New York and Philadelphia is exponentially larger than 80 miles. Having already spent time away from home at Redlands, this could have been the final straw for Lindsey. It's probable that the only way he'll regain any sense of comfort will be at home. It's not really 'family over everything.' When you step back and put things into perspective, family is everything.

Lindsey tweeted Thursday that he is deeply sorry for both his teammates and fans that he'll be leaving St. John's. At a Big East program, he was at the highest level in a promising situation. Acceptance of his choice is unavoidable, but most have pined for actual reasoning.

To this point, Johnnies fans are left with speculation.