Share All sharing options for: Game 23: vs. Connecticut Huskies

Previously: 5 Questions with the U Conn Blog | 5 answers on the Red Storm from Rumble in the Garden

And then, in the Big East Tournament, with former coach Norm Roberts' job on the line and the Huskies grasping for some level of cohesion (or heart) and a possible NCAA berth, a funny thing happened: St. John's straight up manhandled the Huskies, 73-51, running on them with impunity, forcing the Connecticut stars into terrible games. It seemed like the dawn of a new era...

But Jim Calhoun and the U Conn Huskies just refuse to go quietly into the night.

Calhoun has reloaded with a number of talented youngsters, some well-regarded, others that seemed like roster filler. And with those freshmen, the Huskies are a top-10 team this year. Weighted by players' minutes (and not just who is on the roster), the Huskies are the 15th youngest team in college basketball; by comparison, St. John's is the 4th oldest. Talent wins in college ball, not age; the Huskies prove that to be true.

They're young, but they are fast and defend well. Star guard Kemba Walker - the Bronx-bred inspiration for this game's song choice - is one of the best players in the country, carrying his young pups like a diligent papa. The Husky bigs are defending like Husky bigs, and the young wings are coming along.

Kemba is coming home. But fellow Bronx native Dwight Hardy and the Red Storm are playing the Huskies in Madison Square Garden. The arena has played like a home court more than it has in years - excited Red Storm fans, surprise upsets, and solid performances (like the recent blasting of Duke). Tonight is Kemba vs. Hardy, but the game means more for the Red Storm. The Johnnies hope to put the disappointing performance against UCLA behind them and win one of the critical games in their last-month push to NCAA Tournament glory.

Read on for Storm Warnings (aka the dirty secret about U Conn), the Huskies' strengths + weaknesses, Keys to the Game, and pregame media.

The dirty secret about the Connecticut Huskies: they aren't quite what they were when they beat up the competition in the Maui Invitational. And maybe they, like St. John's, just do better against non-conference opponents. But like St. John's, Big East play hasn't been that kind to them. The Huskies' efficiency margin is a skinny 3.6 points per 100 possessions, good for 8th in the conference.

But for a tenth ranked team, a 6-4 record? Struggles on offense? Are the kids hitting a wall?

Connecticut is still superlative on defense, with their big men, shot blocking, ball-hawking lead guards Kemba Walker and Shabazz Napier. The defense is really fantastic (more on that below). But Kemba's efficiency has slowed down on offense, and he takes the most shots by a wide margin. Kemba launches 34.3% of the team's shots; of the regulars, Jeremy Lamb is next at 23.8% of the squad's offensive attempts in conference play.

Others have fallen off as well. But Jeremy Lamb has really stepped up his game to compensate. He'll need to be stopped, along with the Huskies steal-and-run game, led by Kemba and Shabazz Napier, who is getting more shots to fall inside the arc in Big East play.

See what I did there? I said "steal" and I didn't even make a reference to laptop thefts! 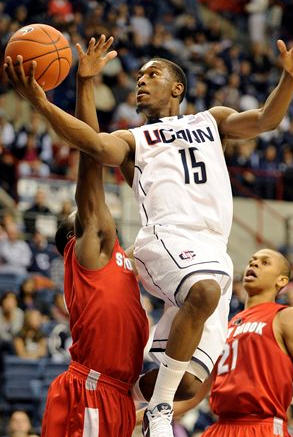 His speed has been a real killer against St. John's. He's quicker than a hiccup.

He's quicker than this sentence.

Walker's improved jump shot - especially off of screens - has made him one of the deadliest basketball players in the country.

His turnover percentage speaks to his ridiculous handle - what other main ballhandler turns the ball over on 8.8% of his possessions? (Seriously. That is absurd, even if Walker does take up a lot of possessions.)

He fills the stat sheet and is a one-man fast break. Dwight Hardy will be matched up with him... can Hardy keep Walker in front? Probably not; Kemba-Stopping is a team effort, and often leads to dunks from the Husky big men when Kemba breaks down his man. Something to watch tonight.

Husky strength: Team defense.What Jim Calhoun has been able to do with the Husky defense is impressive - and perhaps speaks to the lack of energy and cohesiveness last year's U Conn team had. This year, Connecticut is allowing less than 1 point per possession in Big East play.

They're defending the paint with blocked shots and good positioning (and the length of players like Lamb, Roscoe Smith, and Niels Giffey), allowing 44% shooting inside the arc.

They allow 30.7% shooting outside the arc, good for 5th in the Big East.

The Huskies disrupt passing - opponents have assists on only 52.7% of made baskets; only West Virginia and Seton Hall are better.

And Connecticut is second in the league in not fouling opponents, allowing 30.9% free throws attempted/ field goals attempted.

Husky weakness: Rebounding. They're just not that great, giving up offensive rebounds on over 35% of available rebounds. Of course, they still don't allow shots to go in, meaning more offensive rebounds available; but at some point, that can bite a team in the tail.

For more on U Conn, see the answers to the 5 Questions I posed to the U Conn blog.

Slow Kemba. Kemba Walker powers the Huskies with his speed and tenacity. The Red Storm will want to limit his touches, make sure he never has a clear look off of screens, even if it means leaving one of the Husky bigs a little more open than they would like. Of course, Walker is excellent at finding his teammates as well. Still, Kemba cannot be allowed a one-man fastbreak moment; he has to be made to take contested jump shots.

Low Turnover Numbers. The Huskies' perimeter defense is very good, and the Red Storm have periods where they make mistakes under pressure. St. John's doesn't have the luxury of giving possessions away to Connecticut.

Score Inside. Justin Brownlee has to be more of a factor for St. John’s to win any games; he has to find points, as do guards like D.J. Kennedy. And if the inside scoring gets some free throws? Even better.

High Energy Garden. St. John’s has to have some rumbling Garden magic to rattle the puppy Huskies. And the Johnnies have to come with that attacking energy. It's their last shot to beat on Calhoun. I mean, on Calhoun's team. I don't advocate violence on coaches.

Big Game Hardy. Parts of the game will be a one-on-one matchup between D-Buckets and the Kemba. Can Hardy minimize his turnovers and elevate his floor game?

NY Daily News: St. John's Dwight Hardy, UConn's Kemba Walker, both from the Bronx, clash in Big East test at MSG
Because Hardy and Walker will be matched up much of the time, there will be the impulse for them to show one another up. But Lavin hopes that won't be the case. "You have to be mindful of the tendency of competitive people to naturally get caught up in the individual battle," Lavin said. "If you have an awareness of it then if it comes up over the course of the game, you can say the right thing and give the direction to get it back on track to being UConn against St. John's and away from the individual battle."

Hardy says people already are talking about this game in The Bronx, from his Jackson Houses project on Cortland Avenue to Walker's Soundview neighborhood.

Despite the proximity of their homes, Hardy and Walker never have played each other outside of summer league ball, where the competition [has been] fierce.

"The game was intense," said Hardy. "We're both from The Bronx; just two good players going at each other. It was entertaining to watch."

“[Former Rice HS coach + current St. John's coach Moe Hicks] made me work really hard,” [Kemba] Walker said. “I played behind Edgar [Sosa] my sophomore year and had to work for minutes. Just the way the Rice program was, he kept bringing in real good players, so I had to keep working hard. I never knew if I was going to get the chance to play many minutes. That taught me the value of hard work.”

But every 30-point performance by Walker or debate about UConn’s potential has been tinged by unease since the university received a 15-page notice from the N.C.A.A. in May that outlined eight major rules violations by the program, most occurring during the recruitment of Nate Miles in 2006.

Though the university has already announced self-imposed penalties — viewed by some as too lenient — there are two lingering uncertainties for the Huskies: When will the N.C.A.A. hand down its sanctions? And how severe will those sanctions be?

“In my opinion, it would be good to get this done so we could move forward,” Coach Jim Calhoun said recently in a telephone interview.

At a hearing last Oct. 15 in Indianapolis, the N.C.A.A. committee on infractions told UConn that its response would come in roughly six weeks. That was almost 17 weeks ago. The committee, which has not explained the reason for the delay, is meeting this weekend for one of its six yearly assemblies.

Tonight is a homecoming for Walker, who attended Rice High School in the Bronx. Playing in the Garden never gets old for Walker, who expects to have about 25 family members and friends on hand. His former high school coach, Mo Hicks, is St. John's director of basketball operations.

Walker is focused on helping the Huskies play a complete game. They survived a bumpy opening 25 minutes Saturday at Seton Hall and still won, but might not be as fortunate tonight if they get off to another sluggish start.

Hartford Courant: Preview: No. 10 UConn At St. John's
UPS AND DOWNS: From Kemba Walker and Alex Oriakhi at the top of the rotation on down to Roscoe Smith and Niels Giffey, many UConn players are fighting through little funks right now. Now well into the season, and with four games in nine days, Jim Calhoun considers this the most demanding portion of the schedule.

The Huskies' last three games include two losses and a narrow victory over Seton Hall in a game they nearly threw away. But the team remains 10th in the national rankings and its 18-4 overall record is nothing to sneeze at.

"I want these kids to be reminded that they've had a great deal of success against some great teams," Calhoun said Wednesday as his team prepared for a game tonight (7, ESPN) against St. John's. "There are people who believe Texas might be the best team in the country. Well, we went to Texas and beat Texas. It wasn't that long ago."

The last time UConn and the Red Storm played, it was one of the more embarrassing performances by the Huskies in the Calhoun era. The Johnnies defeated UConn 73-51 in New York City in the opening round of the Big East tournament. It ended the Huskies' nine-game winning streak over St. John's and marked its fifth straight first-game exit from the Big East championship.

"It was painful," said Kemba Walker. "Nobody wants to go to the Garden and get killed the way we got killed. It's going to be in the back of our minds, of course. It's a new year and we're playing well. We want to go in there and get a win. It's a big game for us."