5 (more) questions with the Bearcats blog

Share All sharing options for: 5 (more) questions with the Bearcats blog

I'd like to forget that the previous meeting with the Cincinnati Bearcats ever happened. But the Big East's scheduling conspires to make me relive the missed free throws and late-game heroics of a player who I think spends most of the game thinking about what pizza he's going to eat is not known for his late game heroics.

That player, Yancy Gates, was suspended... and reinstated after a beating against the Pittsburgh Panthers; Coach Mick Cronin wants to keep his coaching job, after all. And as he tries to hang on and get into the NCAA Tournament, St. John's comes to town, possibly resurgent.

I've only seen the Bearcats almost give the DePaul Blue Demons their first Big East win recently, so I asked Scott from the Bearcats Blog to catch me up on things Cincinnati.  I did the same on his site, where he fancied up the font.

1- What's the temperature of the fans with respect to the Yancy Gates situation and Mick Cronin's job?

The temperature is starting to heat up. To be fair to the whole situation, things started heating up as UC started losing. The fans, like me, who were in Mick's corner and shouted down the naysayers last season when people said he should go, are starting to join the 'he should go' camp. The Bearcats have a history under Cronin of not winning in February and March. People know this team is good, and there really is no reason they shouldn't make the NCAAs talent wise.

As for the Gates situation, that's a giant log on the fire. It's the 4th time in 5 years a player has been suspended. It's back to back years with suspensions of a starter (last year was Rashad Bishop). All these things are coming together. If UC is in the NIT again, the seat will be hot.

More below the fold on Cincy's scoring struggles, what Yancy Gates does after his first game back from suspension, and good places to go in Cincinnati.

2-  Is it me, or are they really struggling to score? Why is this, and why hasn't Sean Kilpatrick become the team's Flash Gordon (the savior of the Universe)?

They are really struggling to score. Part of the issue is they don't have any great shooters to stretch the floor, outside of Larry Davis, who is very streaky. Part of the issue is that they settle for jump shots. You saw this in the first meeting, when UC took 17 three pointers. This team loves to shoot from deep. Even Yancy Gates loves to throw up 15 footers, and Ibrahima Thomas 3 pointers. It's an epidemic of bad shots at times.

Kilpatrick looked like he was going to do that until the first St John's game. He scored double digits in 4 straight, then scored single digits in 4 straight. His shot left him before the magic elixir of DePaul helped him score 19 points. He got to the line a lot, which is something I hope he continues to do. Sometimes it looks like he doesn't want to dominate the ball as soon as he comes in. That's nice of him, but ya know, in some cases a player of his offensive talent has to.

3- What has Cincinnati been up to since last the two teams met? I hear that Yancy Gates guy is staying classy like San Diego. 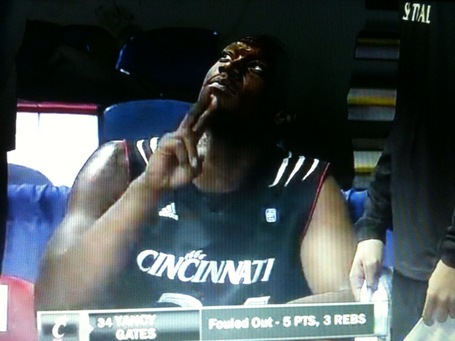 He's definitely not throwing peace signs at the video screen when he fouls out in a close game after putting up 5 and 3, I'll tell you that. Besides Gates getting into an argument with an assistant coach and getting suspended for that, and apparently other things that Gates didn't address but Mick Cronin did, it's been pretty much normal Cincinnati basketball. They beat the bad teams, Rutgers and DePaul. They lost to the good teams, West Virginia and Pittsburgh.

That's what makes the game Sunday so interesting. St John's has been both a good team, see last night, and a bad team. The teams played very similar in Jamaica. Mick Cronin has said this is a must win. That's where we are now.

4- Now that we're deeper into Big East play, what do the Bearcats do well? What don't they do well?

The Bearcats do two things very, very well, not turn the ball over that much, and force turnovers. They are a solid rebounding team. Their defense was playing great, until DePaul shredded them in the second half, which threw the defensive numbers a little out of whack.

What they don't do well is score. They are one of the worst free throw shooting teams in the league. They aren't that efficient, although better than St John's. They don't shoot 3s well either, at 30%. That 30% is somehow only 4th worst. Seton Hall is shooting 24% from deep in Big East play. That's kind of amazing.  The answer is offense, offense, offense. Whatever works in the first half, will stop working in the second half when the opposition adjusts, and UC will have a scoring drought. Rinse, lather, repeat.

5a- a Bearcat is a baby bear, right? Why baby bears? Are there bears in the Cincinnati area?

A bearcat is a real thing. The story behind UC being the Bearcats is that there was a player named Baeher on the football team, and during a game with Kentucky, someone wrote 'we have a Baeher - cat on our side.' A couple years after Baeher graduated, someone at the Enquirer called them the Bearcats, and it stuck ever since. Baby bears are called cubs. The Cincinnati Cubs sounds disgusting as a Reds fan, and I'm happy that's not the name. I don't think if there are bears in the area. I never saw one.

5b- not because I'm coming (though I toyed with the idea), but name some good places in Cincinnati to eat, drink, and fun things to see.

If you are going to hang out, you might as well go to Newport on the Levee. Even though it's not in Cincinnati per se, it's the place to go if you are a visitor. Also, be careful driving around downtown. One wrong turn could get your murdered. Maybe. There are a lot of nice museums in Cincinnati. I would list them all, but I'm sure everyone skipped this part.