A look around the interwebs to see what others are saying about the St. John's Red Storm after the win in Cincinnati.

On the Red Storm's Tournament Chances

That’s how important today’s win was – it was more than just another top-50 win for St. John’s. Everyone knows the NCAA Tournament isn’t played at Madison Square Garden, and the Red Storm had not proved they could win away from New York City on a consistent basis. Throw in a few bad losses, and St. John’s was nowhere near a lock for the Big Dance.

Now, though, St. John’s probably just needs to win one of its three remaining road games – Marquette, Villanova, Seton Hall – and hold serve at home to solidify a berth.

NY Times/ The Quad Blog: New York Teams Strive for N.C.A.A. Berths
The bracketologist Joe Lunardi projects St. John’s as one of 11 Big East squads in the 68-team field, entering Sunday’s game against Cincinnati. But even with some impressive victories and a high ranking in the Ratings Percentage Index, the Johnnies need to keep building their tournament résumé.

"I believe eight league wins and another in the conference tournament would be enough," Lunardi said in an e-mail message this week, although he added that it "would be especially helpful if that includes a win at Cincinnati, so as to avoid being swept by a team with whom they’ll be in direct contention," and that a win against DePaul or another struggling team in the Big East tournament might not be sufficient.

NY Daily News: St. John's seniors see NCAA tournament dream nearing reality with each Big East conference win
They have longed to be a part of the NCAA Tournament but never really have been close.

"It would be great because it's something we all wanted when we were recruited here," said Malik Boothe, one of the seven seniors in the program for a fourth season. "We wanted to help rebuild St. John's and get back in the tournament, win for us and lay a foundation for the classes after us."....

"With every game the team's mind-set gets more confident," Boothe said. "We know if we keep working and winning these games we'll hopefully open the eyes of the committee and we'll get in."

NY Daily News:  Red Storm rising for N.Y. basketball as St. John's racks up big wins in march toward March Madness
A Red Storm is rising on the St. John's University campus in Queens. With each made basket, each wrested rebound, the men's basketball team is breathing fire into college hoops in the big town. 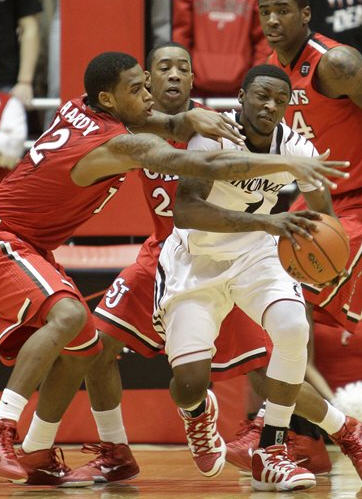 SB Nation NY: Red Storm Escape Cincinnati With 59-57 Victory
Trailing 57-54 with 1:27 remaining in the game, St. John's used the free-throw line to comeback. Senior forward Justin Burrell, a 61-percent shooter from the charity stripe, knocked down both of his attempts to close the disadvantage to 57-56 with 1:18 to play. Then the Johnnies defense held tough.

Johnny Jungle: Kings of the Queen City
St. John’s shot 50 percent from the field (23-for-46) and 75 percent (9-for-12) from the foul line in the winning effort today, stark contrasts from the lackluster shooting effort from the field and 46 percent (12-f0r-26) showing from the charity stripe the first time these two teams met on January 22nd at Carnesecca Arena, a matchup the Bearcats won 53-51 behind Yancy Gates‘ (held scoreless today) game-winning jumper.

[Justin Brownlee], whose attempt to tie the game last month was unsuccessful against Cincinnati, was the offensive catalyst today with a 7-for-9 shooting effort. For the Bearcats, their willingness to live and die by the outside shot in the early going proved critical throughout, as they were only able to get into an effective rhythm from beyond the arc. Of their 19 field goals, 11 were trifectas.

NY Post: Edgy Cincy win boon for Johnnies' NCAA bid
Had Cincy (19-6, 6-6 Big East), another league bubble team, won this game, the Bearcats could have boasted a 20-win season and a sweep of the Johnnies.

St. John's (15-9, 7-5), which moved into a tie for fifth place in the league, now looks better on paper with an RPI of 19 and the No. 2 strength of schedule, byproducts of the team's wins over ranked opponents Duke, Connecticut, Georgetown and Notre Dame.

"I know that we are building an impressive body of work," Lavin said.

NY Daily News: St. John's boosts NCAA Tournament resume as Malik Boothe's free throws seal win over Cincinnati
"There may be some karma payback, some poetic justice," Storm coach Steve Lavin said, "in that we were able to win a game against an opponent that we previously lost a game to because of the free-throw shooting."

The Johnnies have won four of their last five and are now tied for fifth place in the Big East. More important are the ramifications for their goal of getting back to the NCAA Tournament. There is no Big East club that can claim a season sweep of the Storm when the selection committee compares them.

"Each win we get, we're getting closer to our goal but at the same time we can't focus on that," said Hardy, who had a game-high 18 points. "We won today but now we have to play a tough Marquette team (Tuesday) on the road. We think about it but we try not to let it sink in our minds."

ESPN NY: Rapid Reaction: St. John's 59, Cincinnati 57
On the dark side, Cincinnati dominated St. John's on the glass, collecting a whopping 15 offensive rebounds. Also, Cincinnati made 11 3-pointers -- but the Bearcats cooled off in the second half, making just four of 15 attempts after intermission.

"We had so many mistakes that I’m so disappointed it’s really hard for me to describe right now," said UC coach Mick Cronin. "You’ve got to give credit to the team that won the game, but we sure get an assist. You’ve got to get back on defense."

The Bearcats, meanwhile, were settling for 3-point shots because they were unable to get the ball inside against the St. John’s zone. They made 11 of them in a season-high 30 attempts, but shot only 35.8 percent from the field overall and were outscored, 30-14, in the paint.

The Redstorm saw a 12-point second half lead turn into a three point deficit with 1:27 remaining as the Bearcats took the lead with a 17-2 run. St. John’s did not make a field goal in the game’s final 8:59, but they were able to hit five of six free throws in the final 76 seconds to pull out the win.

Justin Brownlee finally got SJU back on the scoreboard with a free throw, but Cashmere Wright would score in the lane and Thomas would do the same off a nice feed from Bishop and Cincinnati had a 56-53 lead with 2:07 left. it was the last made field goal of the game.

CNN SI: St. John's vs. Cincinnati - Recap - February 13, 2011
[Yancy Gates] had another subpar game. Cincinnati's best inside scorer was suspended for a loss at Pitt for breaking team rules, and came off the bench during a 71-68 win at DePaul. He was the last player out of the locker room at halftime Sunday, got in the game for a minute and was benched again.

He sat angrily in his padded folding chair, gesturing and muttering to himself while others played his position. During timeouts, he stood in the back of the huddle and looked around the arena or stared at the floor.

Metro NY: Storm show composure in win over Cinci
"They got second and third efforts from point blank range and the next thing you know we are trailing in a tough environment," Lavin told reporters. "I’m proud of our team for maintaining their composure and finding a way to win. It was just enough stops and free throws that made the difference today."

Composure occurred at the foul line, the same place where a 12 of 26 performance cost St. John’s against the Bearcats last month in Queens. This time, the Red Storm withstood an impressive run by hitting 7 of 10 down the stretch, including two by Malik Boothe. The guard capitalized on a lane violation and made the biggest foul shot of the afternoon, putting the Johnnies up for good, 58-57, with 42 seconds left.

Down the Drive: The Death Of Yancy Gates
It has gotten to the point where [Yancy Gates'] production doesn't justify his appearance on the court beyond garbage time. I will try to remember the excitement, anticipation and he occasional moments of excellence. And truth be told I will defiantly remember those things about him, if only to ram home the fact that Yancy Gates is the most frustrating Bearcat Basketball player ever.

Cincinnati Enquirer: Bad time for Gates' disappearing act
It was less important but no less obvious at the end of the first half. The Bearcats had the ball for the final 50.9 seconds. What they made of it was two missed free throws, an airball on a three-point attempt, a missed layup and a turnover. All in the same possession.

In the second half, when St. John’s scrunched its matchup zone defense into a fist inside the lane, the Bearcats’ answer was to throw up three-pointers like they were trying to win a stuffed elephant at Kings Island.

St. John’s won without making a basket in the last 8:59 of the game.

Cincinnati Enquirer: St. John’s 59, UC 57 – summary
I play the guys that give the Cincinnati Bearcats the best chance to win," Cronin said.

There was a time not long ago when Gates, who entered Sunday’s game averaging 11.1 points and 6.7 rebounds, was one of those players.

"You’ve got to produce," Cronin said. "You can’t just stand on the low block and wait for everybody to throw you the ball."

It was Gates who made the game-winning shot in UC’s win at St. John’s on Jan. 22, but he was not a factor in the rematch.

"We were surprised that he wasn’t in the game because he’s a great player," said St. John’s forward Sean Evans, "and he probably could have helped them down the stretch, but hey, coach’s decision."