Get to know the Marquette Golden Eagles: 5 questions with Cracked Sidewalks

Share All sharing options for: Get to know the Marquette Golden Eagles: 5 questions with Cracked Sidewalks

Coach Steve Lavin knows there's no time to bask in the afterglow of the difficult win against Cincinnati - not when the Midwestern swing brings the St. John's Red Storm into the upper Midwest for a game against Marquette in Milwaukee.

Before the game previews, we try to do a 5 question Q-and-A; this time we've got the fine folks at Cracked Sidewalks providing answers (and may get Anonymous Eagle do to some answers for us as well). If you don't read Cracked Sidewalks, get over there and start learning something about basketball analysis. Seriously. Accessible and intelligent stuff. There will be a 5 questions with Anonymous Eagle later this evening or tomorrow morning.

So let's dig into those Golden Eagles, their incredibly suspect defense, their newcomers and personnel, and where I'm going to eat next time I'm in Milwaukee. Those guys are making me hungry... but basketball comes first.

Thanks again to the folks at Cracked Sidewalks for their answers.

1. What, exactly, should I think about Marquette's quality relative to the rest of the Big East? They've beaten 2 teams with a chance at the top-4 in the conference (Notre Dame (!), Syracuse) and have fallen short in other marquee matchups. Where would you rank this team in the conference?

Marquette is somewhere between the 5th and 12th best team in the league. (Ha!) The stats favor MU pretty well, mostly on the strength of the offense. As per usual, MU is in every game but does not have enough to get over the top against the better teams on the road (and at home too if you look losses at UW@Madison and UConn). Right now, this group has a lower ceiling than we expected.

Read below the fold for more answers.

2. Which player, if stopped, would cause the Marquette offense to struggle?

Marquette's offense has been great all year, though they have struggled for a half in each of the last three games respectively. That’s a concern around these parts even if those games were on the road. I don't know that any one player really makes them go, but if Crowder is off his game Marquette seems more vulnerable. The team has four players who can score in bunches - Jimmy Butler, Dwight Buycks, Crowder and Darius Johnson-Odom -- which makes them tough to defend. Crowder's balance is what stands out with this bunch. The junior can be a bully on the blocks but has a soft touch beyond the arc.

3. What on earth is wrong with the defense? Will pressing help, and is Buzz going to start using pressure? What has the defensive philosophy been?

The Georgetown game notwithstanding, defense is a four-letter word for this crew. Marquette's strategy is to out-score opponents and force a pace that creates more possessions. Defensively, MU is a poor help-side team that will surrender layups and dunks on back-door cuts, and is often caught flat-footed on high screens. MU really struggles to limit opponent's eFG%, but the team does not foul a lot which usually creates a profound advantage at the line. This, however, is a nominal part of a Final Four-caliber defense so your guess about the defensive strategy is as good as ours. We are modestly encouraged by the defense in the three road games that MU just completed, but the overall trend is tough to ignore.

We're three years into the Buzz Williams era and I don't think anybody knows if there is a definitive defensive philosophy in this program.

4. Tell us about Vander Blue and Jae Crowder. How have they impressed you? What do they need to improve on? 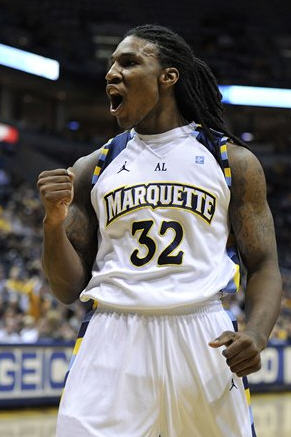 Vander Blue is a freshman and he's butting heads with the proverbial freshman wall. He struggles to score but is a superior athlete off the dribble, is tough, physical, and rebounds well. Like most freshmen his game ebbs and flows, and while he's taking his licks this year we think he'll be a solid player in the years ahead.

Jae Crower, The Predator, is tremendous and has been all season. While he was the National JuCo Player of the Year last season, he didn't arrive on campus until the beginning of the fall semester which might have put lesser talents at a disadvantage.

Not so for Crowder who has displayed a enough of a offensive repertoire, toughness and energy that MU fans figure he compares favorably to the guy he replaced, the Timberwolves' Lazar Hayward. Crowder was a huge find for the MU program. Jae's biggest issue this year - really the only complaint - is intermittent foul trouble, other than that fans just wish he took more shots.

5. How far can this team go in March?

All the way to New York City for the NIT Final Four! Wait, seriously... this team will live on the bubble for the next several weeks and if they protect their home court and sneak in a road win the real tourney is a strong possibility. If MU lands up in the dance, figure one and done -- or one win followed by a heartbreaking defeat in the second round.

5a. What are some of your favorite places in the Milwaukee area to go to? (I still haven't been, and plan to make it up there. If this blasted game wasn't on a frickin' Tuesday late night and I wasn't navel-deep in work...)

OK well since you live in Chicago you need to make the investment and get up to the Cream City. When you get there go straight to Kopps for world class custard and greasy burgers. The Lakeshore Brewery tour is fun, then you can stumble over to the Milwaukee Art Museum (ed. note: the "MAM"?), home of the amazing Calatrava-designed Quadracci Pavilion. The Mitchell Park Conservancy (aka The Domes) are a fine respite from winter. For dinner head down to La Merenda in Walker's Point for the city's best tapas menu, and close the night with a Brainbuster at Bryant's, Milwaukee's oldest cocktail lounge. If you are still conscious top it all off with a bowl of Real Chili (and ask for the Marquette Special even if it is not on the menu).

6. Chris Otule is tall. Why is he playing? How is he doing?

Otule is a work in progress and he's had a few really good games this year and several where he's been invisible. Still, he turned in a fine effort at Georgetown on Sunday with six points and nine boards. He's playing his stretch of best ball the season during the past four games, which included clutch defensive efforts late in both the Syracuse and USF games. Remember that he's just a redshirt sophomore and this is the first season he's been healthy for any stretch of time.

7. Has Reggie Smith's departure hurt the team at all?

No. Smith started five games early in the season but Buzz was playing musical lineups at the time. The lack of a high-ceiling true PG hurts this team and the MU program but Smith was not that player. (Ed note: I saw Reggie Smith play once. I was surprised he was going to a Big East school, he wasn't that impressive. But a very strong guard.)