Share All sharing options for: High in the sky: St. John's beats the Marquette Golden Eagles, 80-68

The Red Storm took another step to national notice and respectability with a 80-68 victory over the Marquette Golden Eagles in Milwaukee. The Johnnies beat Buzz Williams' team on the night Marquette honored their legendary coach Al McGuire. It was so bad that the fans were booing the home team, and those same fans left for the exits with minutes to go in the game.

It's an excellent win for the Johnnies, who move to 8-5 in the Big East with the win, and 16-9 overall. They are solidly in the top-8 of the league, and have a great chance to be ranked in next week's polls, even if they get chewed by top-5 Pittsburgh. And more importantly, the Johnnies are building a strong case for inclusion in the NCAA Tournament.

Dwight Hardy led the way with a sharp 28-point performance. He got to the line 15 times, making 12; Hardy also had 6 rebounds, 3 assists, 2 turnovers, and 5 steals. D.J. Kennedy had a solid game - 15 points, 3 steals. But the surprise for the Johnnies was Justin Burrell, mentioned in the news today as a player who needed to step his game up; he fouled out, but only after notching 10 points and 12 rebounds (6 offensive) and one very audible "get the f*** outta here" after being called for a foul.

That's our Justin! (late note: Justin got 5 stitches in his lip from an errant arm by Marquette's Dwight Buycks, who was falling after attempting a shot in the second half.)

The Marquette Golden Eagles fall to 15-11, 6-7 in the Big East, and really need to find solutions to their defensive problems. Tied at 38 at the half, St. John's outscored the Golden Eagles 42-30 in the second by taking advantage of their "efense" - whatever they were doing had no "D." Jimmy Butler led the Eagles with 23; Jae Crowder had 15, and Darius Johnson-Odom had 14. The Golden Eagles looked like they could take the game in the first half... but St. John's made some solid adjustments and put their stamp on the game in the second.

More on just how well the Red Storm defended the Golden Eagles, after the jump. 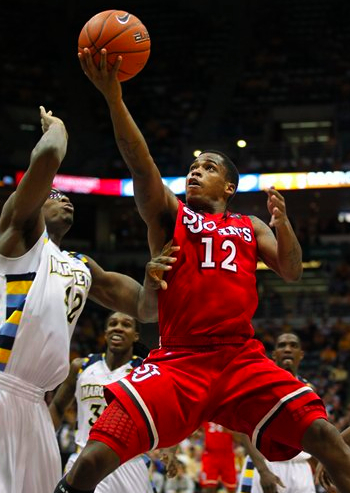 From the pregame/ game thread, we knew that the Golden Eagles were very good at handling the ball - their best offensive quality - and could shoot the orange out of the ball. We also knew that their over-aggressive defense has led them to give up a lot of points.

St. John's took the Marquette positives and dropped them on their head.

The second half saw the Johnnies force 10 turnovers - the Golden Eagles turned it over on 30.7% of their second half possessions. Marquette shot 1 of 5 from outside the arc (though 8 of 14 inside the arc - 57% from inside the arc). And boy, did they give up a lot of points.

St. John's can be defensively challenged when they aren't running in transition. They tried to run in the first half, and found resistance at the rim from Marquette. It wasn't just Marquette; the Red Storm's spacing was questionable in transition, and players kept altering their shots instead of making the simple shot/ kick it out decision.

The halftime speech must have come with a lesson on ball control, how to run the break, and how to not fall into the undisciplined basketball of previous years.

In the second half, Kennedy got good position inside before taking a shot. Justin Burrell made nice plays in the post. The team found Dwight Hardy to make plays. And Malik Boothe was simply nasty - 3 or 4 of his 6 assists came in the second half. One came on a pinpoint pass to a backdoor cutting Dwight Hardy. He looked well covered, but he gathered himself and laid the ball in.

Boothe was carving it up like a Christmas ham tonight.

And Hardy, what else can you say? Dwight's game is turning heads all over the Big East.

The Red Storm flowed their way to 1.29 points per possession in the slower second half. The first played like a sloppy barnburner (38 possessions) but the second was much more in control (32 possessions). The second half begun like a Marquette script, with a Chris Otule block and dunk. But after a timeout with 16:46 left in the second, and the Johnnies down 45-38, the Red Storm went to work with a Justin Brownlee dunk - the whole middle of the lane was open - and never looked back.

The Storm played well. But that Marquette defense... what was going on? How does Justin Burrell get to dribble his way down the middle of the lane for a layup? How do numerous Red Storm players get straight to the rim unmolested? How does St. John's get to over 41% of their offensive misses? I hate to look a gift horse in the mouth, but that's not good defense in Milwaukee.

But it's the first win for the Johnnies over the Golden Eagles in Big East play. It's a win that should solidify St. John's in the NCAA Tournament picture. And it's a win that shows just how dangerous this team can be, how well-coached they are, and how much they deserve a top-25 ranking.

Keys to the Game analysis

Get points. The Red Storm took their chances in transition, from the three-point line, and when the lane opened up, scoring fluidly in the second half. A

Don’t turn the ball over. The first half was a little turnover-laden (18% of the Johnnies' possessions), but the second half saw 2 turnovers in 32 possessions. That is crisp like an apple. B+

Inside play. 26 points, 20 total rebounds. Sean Evans, Justin Burrell, and Justin Brownlee did some work tonight. Two of them did foul out, though... A-

Cover up defensive breakdowns. The zone was nice tonight, recovering to the Golden Eagles' guards and stifling them the whole game; Marquette finished with .95 points per possession (where 1 point per possession is considered solid). A

Keep up the road energy. Great energy from the Red Storm, taking the crowd out of the game and showing poise all the way through. More games like this, and people might just start believing in Lavin and his charges. A