Last year, the St. John's Red Storm lost 71-64 in Madison Square Garden to the Pittsburgh Panthers, and they could have won - with made free throws. But the game seemed a foregone conclusion for much of the contest. The Panthers dominated with crisp scoring inside. And the Garden was, as it often has been over the past few years, a morgue.

Fast forward to today. The Red Storm are winners of three straight and are on the cusp of a national ranking. Tickets to tomorrow's game at the Garden are becoming scarce. Fans are geeked to see the Red Storm take on - or take out - the Pitt Panthers.

Excitement and confidence is at an all-year high. This week's mock bracket exercise with national college basketball writers has the Red Storm in as a 5th seed in the tourney (the dreaded fifth seed - or "haunted" seed - is always a pick to be upset). There would need to be a monumental collapse for the Johnnies to miss the tournament again.

Fans are warned not to rush the court - because there are finally opportunities to do so.

It's not gonna be a morgue tomorrow. The Red Storm have a real hope of beating the Pitt Panthers, who welcome back star guard Ashton Gibbs from an MCL tear of his knee. But Pittsburgh is the 4th ranked team in the country. By efficiency margin, they are almost 15 points per 100 possessions than their average opponent. This isn't the flawed Connecticut team, battling with St. John's and 6 others for placement in spots 3-11 in the conference standings. This is the conference's Big Dog.

Tomorrow is a big game in MSG. Oh yes. The Rumble in the Garden has become a din, and with a win... read more, below the fold.

Which squad is the most offensively efficient team in league play? That would be Pittsburgh - the slow, deliberate, almost clinical offense.

They play a crisp style of offense, making the right passes from all positions, and making those passes quickly; they can reverse the ball as well as almost any team in the conference. Pittsburgh makes opponents defend all over the court, unlike other teams that telegraph their plans or only have one way to score.

They have outside shooting from Ashton Gibbs, versatility/ playmaking from Brad Wanamaker, athleticism from Gilbert Brown, and some beast offensive rebounding from the energetic Nasir Robinson, the big Gary McGhee and the part-timer big men, Dante Taylor and Talib Zanna (the one rocking the flat top).

The Panthers have one of the most efficient offenses in the nation, and their offensive rebounding is elite - second best in the country by percentage of rebounds available.

Which squad is the most defensively stingy per possession in league play? That would be Pittsburgh.

No, it's hard work. The Panthers dominate in the paint, holding Big East teams to 43% shooting inside. And they hold teams to 30.4% shooting outside the arc. And the rebound the other teams' misses. And players like Wanamaker and Travon Woodall will hunt for steals. The 6'4 Wanamaker and 6'6 Gilbert Brown can be excellent defenders. In the Panthers' man-to-man defense, expect one of those two to shadow Dwight Hardy and try to hound him into missed shots.

The Panthers don't show many flaws, though they have struggled in stretches without Gibbs' shotmaking. Part of the issue is that the Pittsburgh scoring is evenly distributed - fitting for a team that passes/ shares so well - except that Gibbs takes a number more shots every game.

With Gibbs out, players who would normally defer to Ashton or wait until late in the shot clock to make an offensive move then have to decide if the Shoot It! Decision Matrix has singled them out to make a play. For a team so well-structured, moving one piece of cheese can be disconcerting at times. 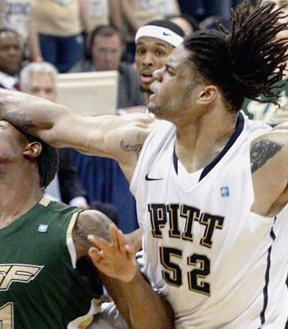 Pitt Positive: Big men.Gary McGhee gets the starts and the big rebounding numbers. Which is fair, because he has become an incredible rebounder on the offensive end and a nearly elite rebounder on the defensive end. His shooting range is within 5 feet, and he makes it work.

But the other big men - Talib Zanna and Dante Taylor - would probably start on many other Big East teams. On this squad, they get backup's minutes, put up efficient performances, play (mostly) strong defense, and rebound the ball. Taylor grabs 19.2% of Def. Rebounds when he's on the floor. Zanna grabs 14.8% of offensive boards, and 14.4% of defensive rebounds when he's in the game.

The Red Storm have trouble with size, and the Panthers will be troublesome to the rebounding efforts of Justin Burrell and Sean Evans, and the scoring of Justin Brownlee - they will have to be active.

Pitt Positive: Offensive versatility. The Panthers feature a number of players who take up between 17-22% of the team's shots while on the floor. The only regular who takes a higher percentage of shots than that in (and out of) conference is Ashton Gibbs, who takes upwards of 27% of the team's shots. That is offensive balance - it's hard to stop a team when they are all unselfish, willing to take the shot or defer, but have a go-to guy to run plays for in Gibbs and a pair of passing playmakers in Wanamaker and Woodall. Defense will be a team effort.

Pitt Negative: A few too many turnovers. In conference play, the Panthers have turnovers on 19.2% of their possessions. Not terrible, given their offensive efficiency and defensive stinginess, but not excellent. Too much dribbling, perhaps? Whatever the issue, look for Paris Horne, Malik Boothe, and D.J. Kennedy to put on the pressure.

Pitt Negative: Ashton's recovery. Ashton is just back to full-contact, full-speed work. Will he be rusty? And the Johnnies goad him into bad shots and run on the misses? Can Gibbs defend?

Force them out of their rhythm. St. John's has to mess up the timing of the Pittsburgh offense, and hopefully get some turnovers and speed up the pace of the game. The Panthers play a slowdown style; they can run, but they tend to play games under 70 possessions (except the squeaker over Providence early in the Big East season).

Dwight Hardy... and friends. Dwight Hardy is going to be well-defended. Who else is going to step up? Will D.J. Kennedy become a foul-drawing playmaker, driving and kicking out to Hardy and Paris Horne? The team needs a solid second and third scoring option. The game can't be won on one man's efforts.

Don’t get crushed on the defensive glass. The Panthers have size and use it to control the game. Can the Red Storm's big men get in for some rebounds and keep the Panthers from dominating? Burrell's energy from the Marquette game and Sean Evans' recent resurgence will be needed.

Stifle the slashing + inside game. St. John’s has to keep the Pitt bigs from making a real impact (and the slashing Gilbert Brown as well). That means keeping them off the low block, disrupting and deflecting passes, and cutting off lanes to the basket.

Protect the ball. St. John's cannot afford turnovers in this game. The team has to get smart shots up, play within themselves, and make the most of their opportunities.