"I just kind of flipped it up there and it rolled right in." - Dwight Hardy, after the game-winning shot in St. John's 60-59 victory over the Pittsburgh Panthers.

If there was any doubt that St. John's deserved a national ranking for the first time since 2000, that doubt was crushed today with a 60-59 victory at Madison Square Garden over the Pittsburgh Panthers.

If there was any doubt that St. John's deserves a spot in the NCAA Tournament, that doubt was swept away with the tenacious play against the 4th-ranked team in the country.

Down 59-58 with 12 seconds left to go, and with Pitt holding on the a lead they'd had for about 8 minutes, Steve Lavin got the ball to Dwight Hardy (19 points, 13 in the second half) and sent him out to make a play. A baseline dribble, pass fake, and a flip up at the basket on Gilbert Brown later - ball game.  I can't believe that shot went in. What a way to finish the seniors' last regular season game at Madison Square Garden.

Steve Lavin has his guys playing big-time basketball. At 9-5 in the Big East (17-9 overall), the Red Storm have clinched a .500 record with DePaul, Villanova, and South Florida coming up.

The Pittsburgh Panthers, paced by Ashton Gibbs' 26 points, fall to 24-3, 12-2 in the Big East. Where do you think the two teams will be ranked come Monday?  Say your piece in the comments. Read the postgame analysis - after the jump.

This was an extremely slow, Pitt-paced game, played at around 52 possessions. That should have favored Pitt. And in a lot of ways, it did. The Panthers outshot the Red Storm (45.7% shooting to St. John's 42.5%). Ashton Gibbs tore it up, going 6-9 from outside the arc and 8-14 overall.

Still, the win featured a very good defensive effort. The team allowed Gibbs to get a new career high in points, but he was shut down late; the 16 turnovers (around 30% of PItt's possessions) forced by St. John's aggressive trapping defense were the real difference in the game, allowing the Red Storm to get out and run, to make the game appropriately sloppy, to draw fouls, and to get Pitt out of their game. 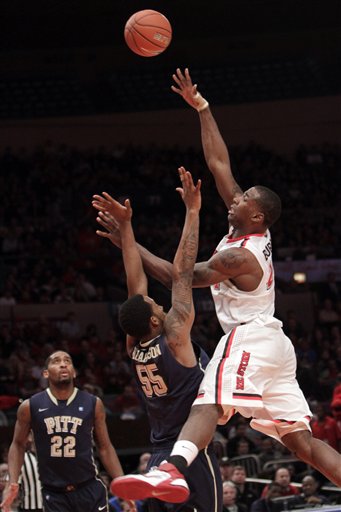 But the effort in the paint can't be overlooked. The Panthers were held to 8 offensive rebounds - 27.5% offensive rebounding, far below their Big East average of grabbing 40.6% of available offensive boards.  If we did players of the game here, Justin Burrell (15 points, 8 rebounds, 2 blocks) would earn the honor - he played like a man possessed, and allowed the Red Storm to weather the Panthers while Hardy rested on the bench. Sean Evans' minutes were critical (3 points, 1 foul drawn, 3 defensive rebounds), and even Dele Coker was good for a clutch rebound and a foul drawn.

Every time the Panthers looked to gain control, the Red Storm had answers.

Problem: Ashton Gibbs, carving up the Red Storm? Response: Shade defenders over, but stop everyone else until late (granted, Travon Woodall got off a late trey that gave the Panthers the lead).

Problem: D.J. Kennedy's a little out of control? Gets a technical? Response: Well, the half ended there. But D.J.'s effort was excellent, and he had 11 points, 8 rebounds (2 offensive) and 2 steals. He took a few "hero" shots he could have saved for later, but a good effort from him.

Big Time Game all around. And big time coaching from Steve Lavin.

From the Keys to the Game

Force the Panthers out of their rhythm. The Panthers were in rhythm, but were defended well in stretches; and the Johnnies got to run on Pitt a bit, taking them out of a strictly halfcourt game. B+

Dwight Hardy needs to score, and needs scoring help. Hardy led the team in scoring, and got excellent help from Justin Burrell and D.J. Kennedy. A

St. John's has to stop Pitt from dominating the rebounding categories. Pittsburgh and St. John's were about even on the offensive and defensive boards.

Stifle the Pitt inside/ slashing game. Well done by the Red Storm. Most of the Panthers' attempts came on jump shots, and Gary McGhee's looks weren't very easy after the first few minutes. A

Protect the ball. Not a great game protecting the ball - 13 turnovers (25% of possessions) - but at least the Johnnies turned the ball over fewer times that the Panthers did. B+