Share All sharing options for: 5 questions with Chicago College Basketball

It's just a day away from the St. John's Red Storm's first game as a ranked team in over 10 years. The next game is against the DePaul Blue Demons, whose record (7-19 overall, 1-13 in the Big East) doesn't speak to how dangerous they could be, despite a talent gap between themselves and the rest of the Big East.

So to get to know the Blue Demons, a squad I watch when St. John's isn't on (their campus is biking distance away), I asked 5 questions to John from Chicago College Basketball.

John Templon covers a number of Chicago area teams - even making it to Chicago State games - and I met him earlier this year at one of the DePaul preseason games. Make a point to read his work - and take a look at the questions I answered over on the Chicago College basketball site. He's a good guy, and knows his way around the tempo-neutral statistics.

I asked John about how Depaul has improved, how they have become dangerous of late (giving the Villanova Wildcats a real run last Saturday before losing in overtime), their star freshman Cleveland Melvin, Oliver Purnell vs. expectations, and what the roster shakeout might look like for a Blue Demons team that has signed more players than they have scholarships to grant. All  below the fold.

1. Talk a little about how DePaul has improved over the course of the year. Is it because of specific players, or players getting used to the system?

The Blue Demons have come on strong at the end of the season because they finally seem to be buying into Oliver Purnell's system. He's sorted out the players that are committed to winning and putting a competitive team on the floor and he's giving them expanded roles. Players like Jimmy Drew and Moses Morgan are getting more playing time recently. The offense has come together a bit as well. So many people talk about the unique defensive system Purnell runs, but he's also brought a new offense to DePaul and I think it took a while for some of the older players to adjust.

2. What has made DePaul dangerous in recent weeks? And what did they need to do to beat Villanova?

DePaul has been shooting the ball much better and slowing basketball games down. Combined that's a pretty deadly strategy. Against Villanova the Blue Demons shot 13-30 from three-point range. Much was made about how poorly this team shot to start the season, but there are some good shooters on the team. Jeremiah Kelly, who has stepped up recently, Drew and Morgan are all good shooters. They just needed to get open looks.

What didn't happen in the loss to Villanova were the key plays down the stretch. In the end this is a team that is relying heavily on three freshman in Cleveland Melvin, Brandon Young and Morgan. Not going over the screen at the end cost the Blue Demons a chance to win in regulation and then they couldn't quite pull out the game with the superior Wildcats getting some extra possessions.

3. Cleveland Melvin - BE freshman of the year? If he is, where does he have room to improve, and can he become an all-league player? 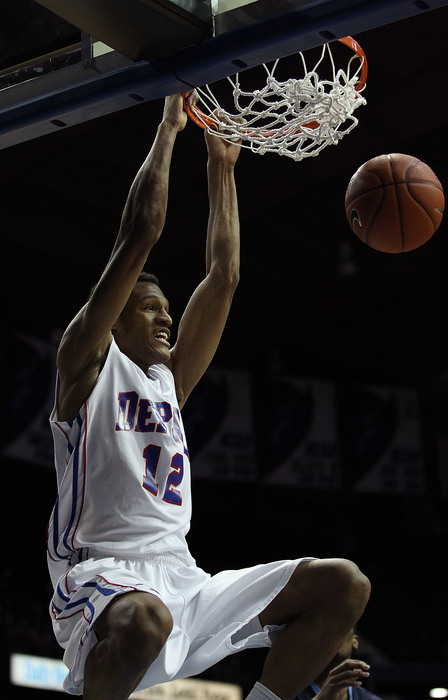 I believe that Cleveland Melvin should be the Big East freshman of the year. He's averaging 14.1 points per game this season and in league play has only missed double-figures twice (against West Virginia and Notre Dame). He's scored 20+ points seven times in league play, including in the victory over Providence. He's not your typical back-to-the-basket forward, but he's got great shooting touch and is incredibly quick. Sometimes the Blue Demons with the best chance to get offensive rebounds off of Melvin's shots is Melvin, because he gets a good read on the ball and darts into position.

Moving forward Melvin is going to need to learn how to play in the low post. While his face up game is excellent at some point he's going to have to take someone into the paint and score over them. That's also going to require a lot of time in the weight room. He's a good offensive rebounder, but with added strength he could become an even better one. One thing he doesn't have to improve? Turnovers. Melvin shoots so much when he gets the ball that he rarely turns the ball over, which is great. Still, I'd like to see him pass the ball back out to the wing a bit more.

4. Do you think Oliver Purnell has missed, met, or exceeded expectations overall? Is there an aspect of the team that's more disappointing than you thought it might be?

Everyone knew this was going to be a rebuilding season. Heck, next season will probably be one too. That said, I think Purnell has met the expectations that were placed upon him. He's not going to go winless in the Big East thanks to the victory at Providence and there has been definitive progress made by the players who have committed to the system. This is a big rebuilding job, not a quick turnaround like the one Steve Lavin inherited at St. John's and I think Purnell has done the best he can under the circumstances.

One thing I was shocked by, probably because I hadn't seen a lot of Purnell's system before this season, is how many open baskets can be given up if the press gets broken. I didn't realize the high risk-reward ratio this system brings. I mean, I knew that was the tradeoff, but it's pretty unbelievable. I hope it improves once Purnell brings in a few more big, athletic players who can do a better job of clogging the passing lanes.

5. DePaul's pace isn't very fast. What gives? Is it a lack of turnovers, or a lack of athletes, or a conscious effort to not let games get out of control?

DePaul isn't playing very fast because slowing the game down is the best way for an inferior opponent to win. I think Purnell realizes that his talent level isn't at the level of most of the Big East and the game plan has been adjusted accordingly. It shot back up against Providence, but the Friars got a number of easy baskets. If you notice the pace has slowed down as the season has gone along. Purnell doesn't have the depth or the athletes to play "his system" at the moment, so he's scaling things back a bit on the tempo side to make up for it.

Bonus question: what does DePaul's future look like? Who returns (if you're willing to venture guesses), who goes, when will the team taste some measures of success?

If you add up the Definitely Staying, Recruits and Transfer you get 13 players exactly. Does that mean Hill and Wallace are definitely out. Well, no - especially because I don't know how Kirk's midseason transfer affects scholarship limits - but it'll be very interesting to see how it all shakes out. That team would be a much more dynamic, athletic team than the roster as it currently stands. I'd expect Robertson, Larkin and Kirk to get a lot of playing time very quickly under that scenario.