We definitely feel confident. This winning streak we’ve been on has given us a lot of confidence. Going to a place like Villanova and not always being the underdog makes us feel like we have a little advantage in getting the win. It gives us confidence from the start of the game to the finish. - D.J. Kennedy, pregame

Last year (recap, written when this was the East Coast Bias)- St. John's was competitive for a half... and then got outscored 44-33 in the second half. I'll point out for posterity's sake that Dwight Hardy played 27 minutes and scored 19 points on 7 of 15 shooting, leading the team... from the bench.

In fact, between the 16 minute mark when Hardy came onto the court and the 9:11 minute mark where he left the court, the Red Storm went on a 20-6 run, powered by 5-6 shooting from Hardy (3-4 from beyond the arc), 1 assist, and 1 block. The Johnnies actually extended the lead from 25-18, but Villanova came back by the half; Hardy didn't play again until the 16 minute mark of the second half.

This is a different year. New coaching staff, more Dwight Hardy, more hope, more ranking, more pride... and more of a chance to knock off the Villanova Wildcats. The Storm are riding a 5 game winning streak, but Villanova - like many of the Big East's top-tier teams - have a streak against the Red Storm, having won 6 straight in Philly and New York City. Like Biggie once said, Things Done Changed. The Red Storm are playing the rest of the muddled Big East for the double bye in the conference tournament, and for a little more respect.

I'll eschew the usual Storm Warnings and Strengths/ Weaknesses for some quotes from three of my favorite bloggers, all of whom cover the Villanova Wildcats. (If you really like those features, let me know in the comments and I'll write 'em up for the game thread tomorrow morning.)

Learn more about the Wildcats - and what happens when I write a preview listening to KEXP.org, below the fold. 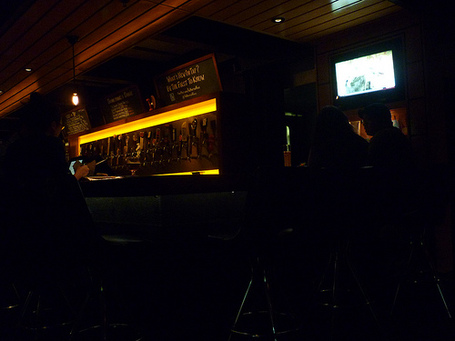 I asked Brian from VU Hoops and Chris from The Nova Blog about Villanova's recent struggles in the recent Q and As, and borrowed liberally from them to create the following conversation.

Imagine this dialogue takes place as a sit down in a darkened bar/ gastropub, over white whiskey and with too-loud hip music and obscure meats being served. Or for the under-21 vegetarians, coffee and croissants. I've added stage instructions so you can recreate this at home.

VU Hoops: Villanovans have not been happy with this team since February. [booing from the folks mixing drinks behind the bar, who are apparently Villanova fans] A lot of fans seem convinced that the season is over and the team won't win another game. I was so dismayed by the reaction after the latest loss that I wrote a blog post trying to talk fans off of their ledge. [a fan sheepishly steps away from a window]

Nova Blog: Corey Stokes has been dealing with injuries all season and they finally became too tough to deal with. I think that shook the team. There was only 1 go-to-guy at that point, and everyone else started pressing to step up, and that made things worse. Now that Stokes is back, I think you'll see us revert back to old times a bit more. [fingers are crossed in unison around the bar]

VU Hoops: The issue for Villanova changes from game to game, but the biggest problem in the close games has been an inability of the supporting cast to hit their shots. In the last two games, only one player connected on a shot from 3-point range, the rest of the team put up an O-fer. [screen comes down, highlights of bricks falling on a wooden court are projected in the background] Shooting generally from the field has been bad too, with even layups being a struggle.

Despite that, pretty good defense has kept Villanova in games. In fact, if Corey Stokes hadn't been a little rusty at the free-throw line on Monday, I suspect that the result of that game might have been different. [Scoop Jardine of Syracuse walks by, pours water in our glasses, and winks]

Rumble in the Garden: [drinking from his gin gimlet] so are the Wildcats suffering from any confidence issues?

Nova Blog: Confidence is definitely the biggest issue right now though. There is a great deal of talent on the floor, but guys like Dominic Cheek and Maalik Wayns are pretty short on confidence right now [a pair of comely women suddenly check their phones and hustle out of the bar] and it is showing in their play. This team needs a feel-good win (hopefully this Saturday) to get the ship righted. [jukebox inexplicably starts playing the Beatles' We Can Work it Out]

VU Hoops: Wayns has definitely seemed to take a step back after being handed more responsibility this season, and he lost his starting job for a while as well. [bearded men in flannel grunt approvingly, and return to peeling skin off of a deer leg] Cheek is still pretty good on the defensive end, but his shot has disappeared in conference play (though, he was perfect from the field against South Florida).

Isaiah Armwood and Mouphtaou Yarou have been getting a lot of time and starts lately. Armwood is mostly a defensive and rebounding presence still, but I have faith that his offensive game will continue to improve and develop. Yarou still needs to get more confidence in his offensive ability, but he is certainly the most successful member of the class so far. [Taylor King brings us our meats with a smile] 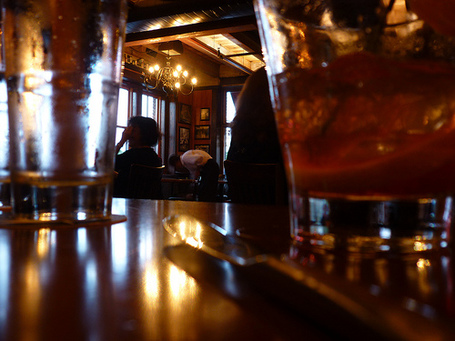 For a look at Villanova's style on offense and defense, let's turn to Villanova by the Numbers and his scouting report. He received a week's worth of delicious meats, served by hipsters - with his drink of choice.

He talks to us from under the old-school chandelier. And we got the inside scoop! (I gave VBTN the scoop on the Red Storm, as well.)

Take it away, Joe:

The Wildcats usually play man-to-man with switches on the screens. The problem in the past is that opponents know where to set the screens that put Fisher or Wayns on a low post player while one of the bigs (Antonio Pena/Yarou) ends up on a perimeter player. That has usually yielded easy buckets for the opponent and early fouls for the 'Cats.

The staff has experimented extensively with zone defenses this season, don't be surprised to see a 2-3 zone or a disguised match-up zone used at different points in the game, especially if Justin Burrell gets busy down low or Villanova's guards (Fisher and Wayns) have foul problems.

Stokes was recognized before his injury as the team's best "small" defender, expect for Dwight Hardy and him to become attached at the hip throughout the game.

Villanova's shot defense has improved immensely this season, the 'Cats are holding their Big East opponents to an average 46.6% eFG%, much better than the 49%-51% conversion rates typical of years past. The defense overall however is more passive, the 'Cats foul less, but also force fewer turnovers. While Villanova was known for zone presses in the past, they use them very sporadically this season, going to the 1-2-1-1 mostly to delay their opponent, and force them to start their half-court set 12-15 seconds into the shot clock.

While the team continues to run a "dribble drive-like" variation of the 4-out-1-in motion offense, the days of the four guard, "take 'em" offense are long gone. The guards, most likely to walk the ball up the floor, rarely look for transition baskets after their opponent has scored.

While the high post screen continues to be one of the favorite plays -- a guard into the lane can create havoc for the defense -- the play is as likely to turn into a pick-n-pop with Pena (the screener) taking the shot from the free throw circle or a kickout to Stokes, coming off a guard screen at the arc. The high post screen can also lead to a low post entry pass to a big flashing along the baseline.

The Wildcats have also incorporated a pick-n-roll option from the high post screen, with the big running a parallel route along the outside of the lane. Pena, like Cunningham in 2009, has become a relatively proficient shooter from 17 feet and in. Having the big take that long jumper from the "dead zone" can, if successful, create space in the lane/low post areas for late scoring plays.

Keys for Villanova...
Per Ken Pomeroy, if Villanova's eFG% is below 40% they will lose. No exceptions. Shoot below 45% (eFG%) and the odds favor the opponent as Villanova is 3-5 when converting at less than a 45% eFG.

Keys to the Game for St. John's

Force turnovers. Villanova's forwards can be a little butter-fingered, and the team as a whole has turned the ball over on 19.2% of their offensive possessions in conference play. St. John's needs turnovers to power their transition offense; look for the Red Storm to stick some hands in when 'Nova players are within reach.

Defensive rebounding. Mouphtaou Yarou's rebounding has been stellar all season, and he's grabbed 14% of available offensive rebounds in conference play. Sean Evans, Justin Burrell, and the rest of the team have to battle to keep him off of the offensive glass. It'll be a tough job to contend with his height, and we will see just how far Philadelphia native Evans has come.

Defend + harass. St. John's has to come with high energy and play their harassing form of defense. In particular, the Red Storm have to keep Wayns out of the lane, keep Corey Stokes from getting a clean catch on the outside when he spots up for outside shots, and make Corey Fisher work to score off the dribble. Hardy, Paris Horne, and Malik Boothe will need to bring their A+ activity and energy.

Get Hardy free. Dwight Hardy needs to find his spots against the Villanova defense, that has been much better at stopping scoring from the field this year than last.

Hit shots. There are only so many opportunities to score, and St. John's has to get better at making those opportunities count, especially off of offensive boards.

Now back to my burger and Maredsous. I think Chris and Brian are arguing again.