"I think when I don't hesitate on the court, I could be a real dangerous player." - Dwight Hardy, postgame

Behind a career-high 34 points from Dwight Hardy, aka the Baddest Man on the Planet, the St. John's Red Storm defeated the Villanova Wildcats 81-68 in Philadelphia. The game was much, much closer than that deep in the second half... but the Wildcats never led. Not once.

St. John's came out with a hot shooting streak and kept control of the game. The defense was harassing, the Wildcats were reduced to one true threat in Corey Stokes (20 points, 6-11 from the three), and the confidence - and execution - is at a high level.

The dagger was a jumper from Dwight Hardy on the baseline with 2:20 left. Trying to bleed some clock with 15 to shoot, Hardy takes a pass from Justin Brownlee at the top of the key, uses Brownlee as a screen to get Corey Stokes off of him, and finds himself on Antonio Pena. No contest; Hardy hits an off-balance jumper to make the game 70-64.

Dwight Hardy did not hesitate.

Soon after that, the Villanova fans started heading to the exits.

St. John's is now 19-9 overall, 11-5 in the Big East. Villanova falls to 21-7, 9-7 in the conference. At this point, this isn't any kind of fluke for St. John's basketball. What looked like a season-long struggle has blossomed into a special season... and it's not over yet.

More on the game, below the fold. 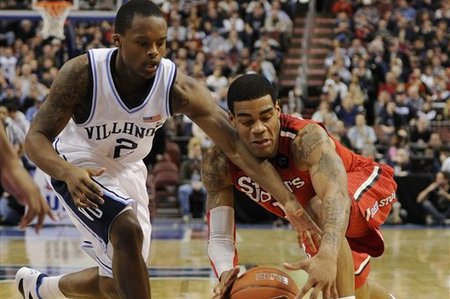 The Red Storm pulled out a huge win on the road, the kind of win that reminds casual observers that it's not just that Ol' Garden Magic working for the Johnnies. It's a defense coming together, it's experience and unselfishness and coaching creating a cohesive whole.

St. John's defeat of Villanova means that yet another team that had a long winning streak against the Storm (6 games) sees that streak broken. The Red Storm have defeated their 6th top 25 team, and gotten their first victory over a top-25 team on the road (first since 2000, officially), with many St. John's fans in attendance.

Are the Red Storm perfect?

Absolutely not. There were flaws in the game, and St. John's has limitations. But the players are heady. Paris Horne's defense and rebounding is top-notch, and Dwight Hardy can bail the team out of offensive funks. And D.J. Kennedy's ability to garb offensive and defensive rebounds, to alter shots, and to defend, was also impressive.

There were many points where the game could have gotten away from the Red Storm - and might have in the past.  The early hot shooting form the perimeter was obviously unsustainable - 16-4? Over the Coreys and Villanova? But what seems improbable is nothing to Dwight Hardy, who responded to two Villanova field goals in the second half with a pair of treys. Or when Villanova got within 1, 65-64? Spread Villanova out and drive.

The ability of the team to get in between Mouphtaou Yarou and Antonio Pena and slap the back out to the perimeter to a waiting Red Storm player was impressive, and gave the team a number of extended possessions. And the defense on Corey Fisher, who went 1-10 overall and 0-8 from beyond the arc, was impressive - an active and aware zone kept him from making plays off the dribble.

D.J. Kennedy had 12 points (many late in the game), 14 rebounds (5 offensive), 3 steals and 4 assists; Paris Horne had 12 points and 5 total rebounds. Sean Evans gave 19 solid minutes in his homecoming, and chipped in 8 points and 4 total rebounds. Justin Brownlee had some nice plays in the second half, scoring 11 points, dishing 4 assists, and grabbing 8 total rebounds. Justin Burrell fouled out in 19 minutes, but was a strong force in the middle; he even played with Brownlee and Evans to make a huge front line when Kennedy picked up his 4th foul.

Then he fouled out as well; but St. John's had adjustments for his absence, as well.

Corey Stokes led the Wildcats with 20 points; Maalik Wayns also had 19 points, 9 at the free throw line. Antonio Pena and Mouphtaou Yarou combined for 8 shots, 9 free throw attempts, 10 points, 8 fouls and 16 rebounds (3 offensive). Dominic Cheek helped bring the Wildcats back with a rediscovered shooting stroke early with 11 points, but didn't make a huge impact in the second half; the defense turned it up a notch and made everything difficult for the Wildcats.

This St. John's team is turning in some special - and unheralded - performances. And they're not done yet.

PLAY THE MARCH TO THE CHAMPIONSHIP GAME AND YOU COULD WIN A TRIP FOR TWO TO LAS VEGAS!