5 questions on the Connecticut Huskies with the U Conn Blog

Share All sharing options for: 5 questions on the Connecticut Huskies with the U Conn Blog

In our Red, Stormy hearts, they're a rival, but it's hard to call them such. The last 10 years have been spent with the Huskies mostly beating up on the Red Storm. Jim Calhoun would blast the Johnnies, talk about how hard they played, take the better players out of the area, kick sand in the faces of St. John's fans.

The victory in the Big East Tournament last year was great, but to me it wasn't cathartic; that Husky team had just given up on the dream of winning basketball games. They looked like guys who wanted to move on to their post-college European or Central American hoop careers (where did all those guys go, anyway?)

Here is hoping that tomorrow is more like 1997-2002, where the games were a real toss-up, and the Huskies and Red Storm met for Big East championships. Or even better, like the 1980s, where the Connecticut Huskies were a speedbump before the next game, and Connecticut fans didn't infest the Garden like so many loutish blue bedbugs.

Vegas sees good times coming again; the Johnnies are favored by a point in the early spreads.

In anticipation for tomorrow's matchup, we chat with the U Conn Blog on Kemba and the Walkerettes, aka the Connecticut Huskies. Thanks to Kevin for his answers! The Rumble's responses will be up tomorrow, once the U Conn Blog finishes gushing over how great Syracuse and Jim Boeheim are (they lost a bet).

1. So tell us about the Kemba show, and how the special guest stars are slowly working their way into the opening credits. Jeremy Lamb, in particular, has become... well... a Big East player. Who gets second and third billing on this team now? How do they complement Kemba, and which player needs to have a good performance besides Kemba to win games?

You know, I think non-UConn fans got so caught up in the Kemba Walker hype - and deservedly so, because the guy was best college basketball player on the planet for two months - that they haven't realized that Kemba really hasn't been carrying as much of the load for the past, oh, six games or so. And it's showed, because UConn has been kind of slumping lately, with back-to-back home losses (to good teams, but still) and a near-catastrophic loss at Seton Hall.

Kemba has kind of reverted back to being the streaky, inconsistent shooter he was last year (his 3-point %, once at ~40%, has dipped to 33.8%), and he doesn't have the same pep in his step as he did in November. I will chalk that up to physical exhaustion (he's on the court almost 90% of the time) and the fact that there are two or three defenders on him as soon as he steps inside the 3-point arc. 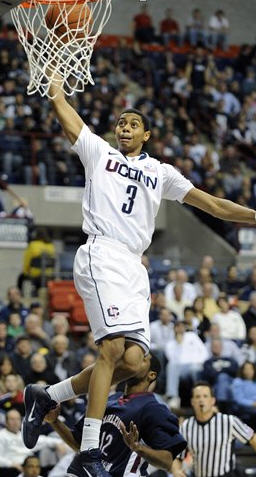 I don't know that we'll ever see November Kemba again for those reasons; thankfully, all is not lost because, as you said, Jeremy Lamb (pictured right; AP Photo/ Fred Beckham) has really stepped up. Lamb is a strange player. He's about 20 pounds too light, he can't play defense, and his outside shot is very, very inconsistent.

And yet he's scoring in bunches, in part because he's very quick, very lanky, and lately very aggressive. Lamb was more or less invisible until the Villanova game on MLK Day, when he hit a couple big buckets (including his pretty teardrop floater, which you will see Thursday and which goes in the hoop 10 out of 10 times).

He's now officially the #2 scoring option, although I'm not so sure he's ready for it yet. He's going to be a star very, very soon, but at least this year UConn's had mixed success on the brief occasions they run their offense through him.

As for the #3 spot, it's rotated between a few guys. Shabazz Napier has alternated between amazing and frustrating, often on the same play. He has a nice jumper, but he'll shoot it anywhere, anytime; he is a great on-ball defender, but sometimes he'll get lazy and let his man get by him and try to poke the ball out from behind.

Roscoe Smith is a big body who can rebound the hell out of the ball and play on the perimeter, but I guess some of the Rudy Gay/Stanley Robinson freshman-year inconsistency is rubbing off on him. He hasn't produced much lately.

The real answer is that Alex Oriakhi needs to be the #2 option, but he's just not there yet. His post game is underdeveloped, and he's primarily going to score on garbage plays, and that's fine. But if he doesn't rebound, UConn is in bad shape. In UConn's 18 wins, he's averaging 11.5 points and 9.5 rebounds. In their four losses, those numbers are 5.8 and 5.0.

2. How are the big men coming along? How do they fare against, say, a quick mobile big?

As mentioned in the last response, Oriakhi has a lot of work to do. He needs to get stronger, he needs to work on his hands and he needs a post move that isn't "back your man down and throw it wildly and high off the backboard."

There's also Charles Okwandu, our 7-foot senior who is slowly becoming an actual useful rotation player. I never thought it would happen, but here it is. His basketball IQ is still not that good, and he can't catch, and he will frustrate the hell out of me every other play. But he's shockingly scored 8 points in two straight games, and there are actual aspects of his game that I like. (His rarely-used-but-money baby hook, for instance.)

Unfortunately, that's literally all we've got as far as bigs go. Freshman Michael Bradley is redshirting, and freshman from Germany Enosch Wolf hasn't seen action in any meaningful game. Our post depth is 2 guys. When Oriakhi is in foul trouble or Okwandu is playing terribly, UConn will often go "small" by slotting 6-8 wing Roscoe Smith as the power forward, and helpfully Smith can bang down low.

Mobile big men don't seem to cause too much of a matchup issue, because Oriakhi and Okwandu are both very athletic, and Smith might be the best pure athlete on the team. I worry much more about the bulldozer-types who can push Oriakhi out of the way for rebounds and putbacks.

3. How does one beat the Huskies? What does Calhoun feed these guys to get this kind of performance from a team that looks like it has holes?

Beat us on the boards, don't give up points in transition and hope Kemba's shots aren't falling. That seems to me to be the closest thing to a formula I've seen.

The halfcourt offense has been stagnant of late, especially against a 2-3 zone, and if Kemba's not shooting the lights out, the Huskies get all out of sorts. Watching the last two games, UConn's favorite offensive play has been "dribble around at the top of the key for 30 seconds, set no screens, and Kemba/Napier/Lamb launches a 3 with the shot clock expiring."

As to your point on overachieving, here's the hidden little secret about this UConn team: they play wonderful defense. Napier and Smith are excellent on-ball defenders, Oriakhi and Okwandu are above-average shot-blockers, and Kemba is so quick he can stay with anyone. The one defensive liability is Lamb (that will change when he gets bigger and stronger). But when UConn has gone on their biggest game-changing runs this season (post-Maui, anyway), it's sparked by completely shutting down the other team's offense. Witness the 15-3 run at Texas, the 11-0 run at Marquette, the 25-9 run at Seton Hall, and so on. Offensive execution wasn't anything particularly special, but the defensive effort was.

4. How far can this team go in the postseason? What kind of team will be the Huskies' undoing?

I think Calhoun had it right after the Seton Hall game Saturday night, when he said that UConn can beat anyone in the country, and they can lose to anyone in the country. Whatever packet the Huskies find themselves in come March, they will be capable of beating any of the top 12 seeds or losing to the top 12 seeds. It's rather frightening, honestly.

Over amongst ourselves on the blog, we're kind of whispering about that thing that happens in Houston in April...it doesn't seem particularly realistic that the Huskies could win four straight games in the NCAAs, but based on our resume this season, anything is possible. Right now, though, if you signed me up for a UConn Sweet 16 appearance, I'd take it.

The key for UConn's March destiny will really be whether Oriakhi can step up and become a big-time player. If he's not, UConn will need back-to-back-to-back good shooting nights from Lamb and Smith, which is tough to ask of any freshmen. Alternatively, Kemba could return to his November/December production to lead us deep in the tournament, but as I said, that ship may have sailed.

5. What does the future look like, post-Kemba? What recruits are on the horizon? Any indication that Calhoun will stay a few more years?

I am decidedly optimistic about the future of the program, in no small part because back in November, it was not a very good time to be a UConn fan.

The program graduated three four-year contributors (Stanley Robinson, Jerome Dyson, Gavin Edwards) and were left with Kemba and a bunch of unheralded freshmen. The NCAA investigation was still ongoing (weirdly, we haven't heard much about that since October). No one knew if Calhoun would even want to hang around much longer.

Fast forward four months, and the program is completely reinvigorated. There are eight freshmen on this team, and three of them have star potential (Lamb, Smith, Napier). Several others (Niels Giffey, Tyler Olander) look like they could be very nice complementary players over the next 3 1/2 years. Oriakhi will be back next year. This is a very exciting core of players to build on.

UConn has just one player committed for the 2011 class to replace Kemba (and seniors Okwandu/Donnell Beverly), point guard Ryan Boatright, a four-star from the Chicago area. He's touted as a great passer and a solid shooter and scorer, and he should fit in nicely next season.

The jewel of the class - and the one who I think could make this team championship-caliber - is 6-11 Andre Drummond of Hartford. He's unsigned as of now, and he may elect to classify for the class of 2012. UConn is chasing after him, and they are supposedly one of the favorites to land him. His ESPN profile is just about the greatest thing ever. A dominant big (in the tradition of Emeka Okafor) could ping this core of players to the Final Four and beyond.

As for Calhoun, we know that he just signed his last contract in June (a five-year deal), because he's said as much. We also know that Calhoun said he would have retired had UConn won it all in 2009, so we can assume that any national title in the next five years will be it for him. And we know that Calhoun has had his health issues over the past couple years, although this year he seems like he's perfectly healthy and vigorous.

So we are very much in the home stretch for Jim. Barring health issues (or national title #3, which he seems desperate to win) or a complete worst-case scenario deal (where the team loses 20 games one year, or something), I think he'll stick out the whole five years. But it's really anyone's guess.