For the first time in over ten years, the fans of the St. John's Red Storm can watch the NCAA Tournament Selection Sunday show not with scorn and envy, but with anticipation over where the Storm will go! Whether tickets are available for the games! Whether the game is on during lunch at work! And how much trouble one gets in for streaming video at one's office!

But the exhilaration of these heady days are muted by D.J. Kennedy's injury. That unfortunate twist of a knee in the fifth minute of the St. John's loss to Syracuse in the Big East Tournament Quarterfinals was awful to see for casual fans, but even worse for the die hards, and hardest on the team and their families.

From the moment he stepped on campus, D.J. Kennedy has played whatever role he needed to to get the win. The role playing defender. The aggressive driver. The canny rebounder. The leader. D.J.'s meant a lot to the Red Storm, and has inspired the #DoItForDJ hashtag among St. John's fans.

It seems that the bracketologists think Kennedy means a lot to the Red Storm as well. St. John's, once warmly ensconced in the #4 or #5 seed, is now estimated to be bumped down to a #6 seed in the Tournament by Lunardi, by Jerry Palm (St. John's bracketology in the video via Zagsblog), but still a #5 seed by Blogging the Bracket.

Everyone knows about the 5/12 upset phenomenon - some flagging major conference team or highly touted mid-major gets a #5 seed, and is promptly knocked off by a team that comes in as a #12 - a tortured major conference team with bad losses, or a mid-major automatic qualifier that executes well. Last year, there was only one 12 over 5- the Cornell Big Red, who had beaten the Red Storm in the Holiday Festival. 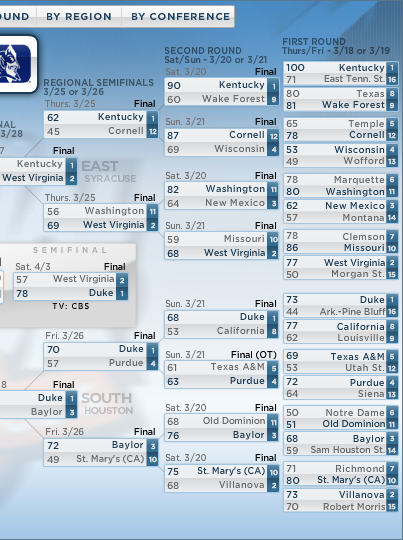 But the 6-11 can be just as volatile. A pair of #11 seeds won their first round games (the side of the bracket pictured here, from NCAA.com) last year; this year, talented but inconsistent major conference teams are slated to enter in the #11 seeds - squads like:

The #6 seed can be a stormy road. That said, the #6 seed also has benefits for a team that gets hot. The Red Storm won't face a #1 seed until the regional Finals - the fourth game in the Tournament a/k/a the Elite Eight. Which should be a good thing. Though seeing Duke, Brigham Young, Purdue, Syracuse, North Carolina, and possibly San Diego State on that line gives a fan pause.

And having to get through the #3/ #14 winner to get to the Sweet Sixteen could be tough; a number of the possible #3 seeds could be playing close to home - Florida playing in Tampa, for example, would be like playing a road game.

Losing a seed line isn't the worst thing in the world; and there are many vulnerable teams in the Tournament. And St. John's has beaten 6 ranked teams this season with their pressing style and clutch talents.

And they're in the NCAA Tournament. Once you're in the Tournament, teams play to win. Doesn't matter who that team is. Doesn't matter the seed. Everything is even in this most democratic of tournaments. 1 seeds get bounced by directional schools. States you've barely heard of make noise. Sweet shooters and ball handlers are rewarded. And that senior grit of St. John's gets one, two, three, four, maybe more chances to #DoItForDJ.

How are they going to do it? Check back tomorrow as Rumble in the Garden analyzes how St. John's can start to make up for the loss of Kennedy on the court.