Since you're here, you know that St. John's is getting ready for the Red Storm's first NCAA Tournament game in 9 years, facing the Gonzaga Bulldogs in Denver, Colorado. Sunny weather, high altitude, and one of the most intriguing first-round second-round games await. How will the Red Storm deal with D.J. Kennedy's injury? The Zags are almost everyone's pick to knock the injured Johnnies off, despite coming in as an 11 seed.

And who are these Gonzaga Bulldogs, this occasional "America's team", these perennial tournament darlings? To get to the heart of what makes the Zags tick, we've got a question exchange with The Slipper Still Fits. Thanks to Zach for answering my questions!

What's been the story arc for the Gonzaga season? Who was expected to lead the team, who has ended up leading the Bulldogs? How have the Zags changed from the beginning of the season, where they lost a number of games, and the middle of the season where the Zags lost 3 straight?

Every season following Gonzaga has its own quirks and is fascinating in its own way. For my money, I can't remember a season that has been as exciting, frustrating, etc., as this one. As we've come to get used to, Gonzaga started the year with a ton of hype. Joe Lunardi and Len Elmore both picked the Zags to not only have a great season, but to win the national title.

Long story short, the beginning of the season was a nightmare. A difficult schedule combined with backcourt issues, a lingering Elias Harris injury, and horrid perimeter defense knocked Gonzaga out of the rankings by early December. While there were some highs and lows from that point on, Gonzaga is now riding a nine-game winning streak and has not lost a game in over a month. There are a few reasons for the change.

First, Gonzaga has gotten some backcourt consistency. Mark Few has decided on a shorter rotation which has given increased minutes to Marquise Carter and David Stockton. The move has paid off as both they and starting point guard Demetri Goodson are playing at a high level.

ed. note: Read on, below the fold.

Second, they are defending the perimeter better and just playing better overall team defense. There have also been some other pleasant surprises including the play of redshirt freshman Sam Dower, but the reason Gonzaga is in the tournament is because of their newly found backcourt contributors and improvement defensively.

Tell us about the Zags' defensive concepts - man? Zone? How do they force so many turnovers (tops in the WCC, according to tempo-neutral stats)?

Gonzaga primarily employs a man-to-man defense. Mark Few elects at times to throw out a random zone for a possession or two but, for the most part, this is a team that runs a man. Upsetting to me, this is a team that also rarely (and I mean rarely) pressures the ball in any manner of speaking.

I can tell you now that Gonzaga forcing a bunch of turnovers will not be a deciding factor of this game.

The Zags' steal numbers are highly inflated due to the fact that there are a lot of bad teams in the WCC. Case in point, Gonzaga had 14 steals in both games against lowly San Diego. Most of those turnovers came from a Torero player dribbling it off their foot into the hands of a Gonzaga player.

What can St. John's fans expect from the Gonzaga backcourt?

A program that is typically known for their outstanding lineage of guards, Gonzaga is without a doubt a team that is predicated on what they can do from within this season. The point guard minutes will likely be split between Demetri Goodson and David Stockton. Goodson is the starter and will be the quickest player on the court. Stockton is a more deliberate player and, as you'd expect from his bloodlines, he has much more of a knack for creating than does Goodson. The star of the backcourt down the stretch has been off-guard Marquise Carter.

The two keys to the Gonzaga backcourt are Steven Gray and Marquise Carter. Beginning with Marquise, he has gone from bench warmer to becoming the most indispensable member of the backcourt. Five of the past seven games, Carter has been in double figures and he was named the most valuable player of the WCC Tournament. He's Gonzaga's best threat to stretch the court from deep but has also shown the ability to take it to the rim. Most importantly, he doesn't make mistakes.

Steven Gray is a wild card. He began the season looking like one of the best players in the nation and has cooled down the stretch. He can score in any fashion but his most notable contribution may be that he is now taking care of the ball. Gray has not had more than one turnover in a game since February 10th, an often overlooked stat when thinking about the Zags' climb.

What can St. John's expect from the Gonzaga frontcourt? 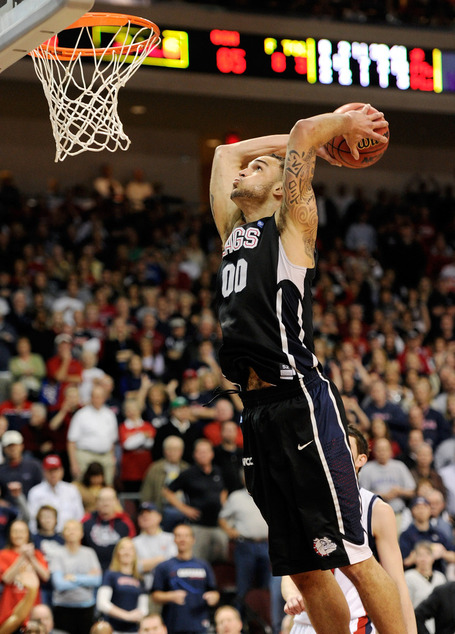 Gonzaga's frontcourt is a three headed monster. Robert Sacre headlines the trio standing at 7' tall. Still a relatively raw offensive player, Rob has improved mightily since arriving at Gonzaga but still has work to do. If he is able to get position, Rob can make the sliding hook shot. He's still susceptible to the double-team and at times falls back into the bad habits he brought with him to Gonzaga.

Perhaps Rob's best attributes are that first, he is an excellent defender. He has been a great shot blocker during his time at Gonzaga and is one of the better big men in the nation and showing on perimeter screens and rarely commits stupid fouls. The second thing is that he gets to the line a lot and cashes in at 83%.

Elias Harris and Sam Dower are both scoring threats. Weaker on defense, Elias and Sam have both been offensive stars for this team down the stretch. Harris works best when he is isolated and is able to drive facing the basket. Sam is more of a pure back to the basket scorer, but can easily step out and hit the mid-range jumper. It is a dangerous frontcourt with plenty of scoring ability and size.

What do the Zags do well? What is their Achilles heel, what flaws cause them to lose games?

Marquise Carter and David Stockton have opened things up for the entire team. The Zags are finally able to feed the post with regularity and the court is becoming larger. Marquise Carter's ability to shoot, dish, and drive has taken some of the pressure off of the bigs and the dividends have been remarkable. As I have said, this is still a team dictated by how they perform from the inside but what they are doing well now is showing balance in both facets.

Gonzaga's fatal flaw throughout the season has been defending the perimeter and it has caused them to lose games. This is one of the reasons why many are confident in the matchup because SJU isn't known for their perimeter shooting. I guarantee you, though, that many Zag fans are still losing some sleep over it.

How far can Gonzaga go if they win the "second round" game?

I've toyed with them making it to the Elite Eight. There is an interesting dichotomy among Gonzaga fans. Some think this team is peaking and some think they have just been playing bad teams. I'm with the former camp. Unlike so many other Gonzaga teams, this one is finally playing their best basketball down the stretch. In years past, GU has been notorious for putting together a big November or a great December and then everything hits the pits in April/March.

Now, this is a team that is clearly positioned well, is getting great bench contributions, and appears to have found some quick fixes to the issues that plagued them in December. In terms of the draw, most Zag fans are ecstatic. I believe that the winner of this game will be able to beat BYU even though Jimmer lurks and then we'll see whether it is Florida, UCLA, or MSU but Gonzaga or St. John's would both have a great shot against either of those three.

Are many fans going to Denver?

Should be. Gonzaga has a big alumni footprint in Denver and the Spokane folks always seem to travel well. Also, Denver seems to have a soft spot for the Zags. Most of it is because of Matt Bouldin who was a Colorado prep star and went up to Gonzaga and starred for four years there. Colorado is not known as a basketball hotbed whatsoever so when a stud comes out of the state, people remember.

Which deep bench player could come in for a spell in the game and really surprise the Johnnies?

As I said, Gonzaga now employs a short rotation so there shouldn't be many surprises for Steve Lavin. In terms of bench production, Sam Dower could have a big impact. He has remarkable touch around the basket for a kid of his age and experience level. He absolutely killed Saint Mary's in Gonzaga's two regular season games with them and has been a star during GU's win streak.